After more than a year, the New York City subway system will once again operate 24 hours a day. But riders and workers are concerned about crime, according to a union and a ridership survey.

NEW YORK - After more than a year, New York City subways will finally return to around-the-clock service on May 17, 2021, the governor announced on Monday during his coronavirus briefing.

Subway ridership plummeted 90% after the rise of the coronavirus pandemic. The MTA suspended around-the-clock subway service on April 30, 2020, in order to facilitate deep cleaning of the trains and the clearing of homeless people from the trains and stations. The overnight closure ran from 1 a.m. to 5 a.m. until February of this year when it was shortened to two hours, from 2 a.m. to 4 a.m.

In recent months, riders have been returning as more New Yorkers get vaccinated and business restrictions have eased. On April 8, ridership topped 2 million for the first time since the start of the pandemic.

But Gov. Andrew Cuomo acknowledged one challenge remains: safety on the subways in the wake of a spike in certain crimes.

"Have you been on the subway? 'Cause I have and I was scared," Cuomo said, describing how many subway riders are feeling.

Crime in the subway system

New York City's subway system will soon return to 24-hour service. The MTA is asking for more police. And the union representing workers says authorities need to address with the mental health factor of the problem.

MTA officials say they're ready to move more passengers. But they are also focused on crime. The NYPD says subway crime has dropped. Yet, ridership has dropped by even more. So the MTA says that means today's rider is 53% more likely to be a victim of crime.

Police on Tuesday released two new videos showing attacks in the subway. One video shows a man sucker-punching a woman from behind and then stealing her bag. Police say the bag contained her laptop and credit cards.

Another video shows a suspect wanted for a hate crime. Cops say he attacked an Asian man from behind on a platform. 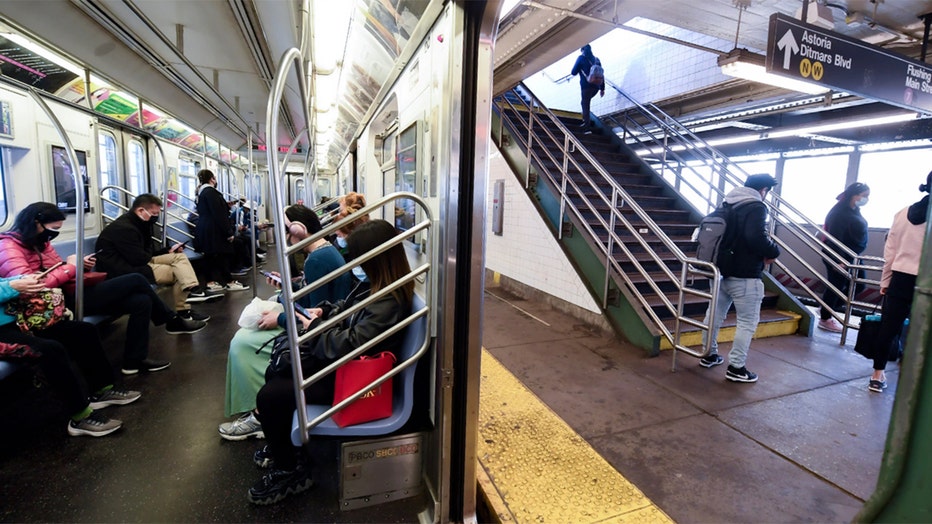 The subway system definitely has an image problem to contend with since the start of the pandemic. The mayor's office and NYPD said that overall crime is down on the subway.

"The mayor has a very unorthodox definition of the word safe if he thinks it's safe right now," Pete Donohue, a spokesman for the Transit Workers Union Local 100, said. "It is as bad as it seems."

After a horrific spike in violent crimes earlier this year, the city started deploying more police officers into the MTA system. TWU Local 100 says felony assaults have gone up 44% over the past three years based on data from the NYPD, comparing numbers collected from January through April. The union says their workers are being attacked daily now, often by homeless individuals coping with mental illness.

"They need to have more mental health services out there," Donohue said. "What do you do with individuals who can't take care of themselves, or a threat to others and themselves, and refuse services."

MTA workers do not feel safe, he said, and say they are being assaulted or harassed on a daily basis.

"There is a station agent who had to flee her booth because a maniac was bashing it in with a concrete block," Donohue said.

The MTA pointed out that major felonies and misdemeanors per 1 million riders is up 53% so far this year compared to 2019. The MTA's recent rider survey found that 87% say they are most concerned about crime and harassment.

Right now, when the system is shut overnight for cleaning, everyone — including those who are homeless — is required to leave the system. As of May 17, they can stay in the system 24/7 or simply re-enter at another entrance.

Transit experts say this isn't just about policing, that it's about the city figuring out how to handle a growing mental health crisis that often turns violent.