The worst of the weather has moved out of the region. A sunny, but cooler day is ahead. Expect a high of 75 degrees.

The flooding in New Jersey and New York City was so severe that the National Weather Service issued a Flash Flood Emergency for the first time, ever.

"To be clear... this particular warning for NYC is the second time we've ever issued a Flash Flood Emergency (It's the first one for NYC)," the NWS said in a tweet at 9:28 p.m. The first time the agency had issued such an alert was an hour earlier for New Jersey.

At least eight people were found dead during devastating flooding across New York City. The rain was so heavy it inundated everything from basements to subways.

"MTA train service is extremely limited, if not suspended, because of heavy rainfall and flooding across the region," the MTA said. "It is strongly recommended to avoid traveling at this time, if possible."

The rain continued past midnight and caused even more flooding of urban areas, highways, streets, and underpasses as well as other poor drainage areas and low-lying spots, according to authorities.

Just after midnight, New York Gov. Kathy Hochul declared a state of emergency due to the flooding.

"I am declaring a state of emergency to help New Yorkers affected by tonight's storm," she said. "Please stay off the roads and avoid all unnecessary travel."

A man,70, in Passaic died after becoming trapped in his vehicle during severe flooding late Wednesday. A day later, cars remained waterlogged and streets flooded from Storm Ida.

"We're enduring an historic weather event tonight with record breaking rain across the city, brutal flooding and dangerous conditions on our roads. Please stay off the streets tonight and let our first responders and emergency services get their work done," de Blasio said. "If you're thinking of going outside, don't. Stay off the subways. Stay off the roads. Don't drive into these heavy waters."

RELATED: De Blasio declares State of Emergency in NYC due to historic flooding

The National Weather Service posted several Tornado Watches and Warnings for parts of the region throughout Wednesday evening, including for parts of New York City, as well as alerts for flooding, severe thunderstorms, and more. At least one tornado, possibly more, touched down in  New Jersey. At one point Wednesday evening, radar detected wind rotation in the Bronx.

New Jersey Gov. Phil Murphy declared a state of emergency in response to the storm damage.

"Tropical Storm Ida is severely impacting all areas of our state," Murphy said in a statement. "The safety of our residents is our main priority, and we urge everyone to be informed of local weather conditions and to stay off the roads."

"We're hearing reports that crews are running out of resources to rescue people stuck in flood waters. People are continuing to drive into flood waters resulting in hundreds of water rescues," NWS Mount Holly tweeted. "Please, unless you must travel, stay home tonight in you live in NJ or PA."

Earlier, Murphy tweeted that he had spoken to Harrison Township Mayor Lou Manzo about the "devastating tornado" that slammed the Mullica Hill community in the township. 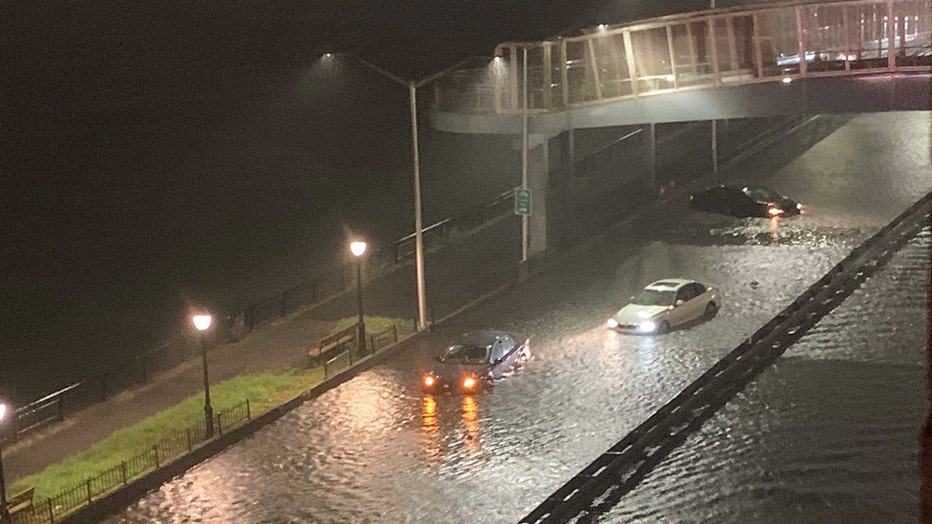 Motorists were stranded in flooding on the FDR Drive, Sept. 1, 2021. (Robyn Shepherd via Storyful)

"We're closely monitoring the situation and will do whatever is needed to support the response & recovery in the days ahead," the governor said.

The National Weather Service issued a rare Flash Flood Emergency for Manhattan, Brooklyn, and Queens, saying that the flooding posed "an extremely dangerous and life-threatening situation."

At least one tornado touched down in Gloucester County, N.J. Several people shared dramatic videos of the funnel cloud and the damage. (Source videos via Storyful)

The National Weather Service expected up to 6 inches of rain in the region with locally higher amounts possible. Rainfall rates could reach 3 inches an hour at some points.

The MTA on Wednesday evening banned empty tractor-trailers, tandem, piggyback, dual and multiple trailers, motorcycles, and minivans on the Bronx-Whitestone Bridge in both directions.

People have been sharing dramatic images of the storm damage on social media.

A large funnel cloud formed in Mullica Hill, New Jersey, on Sept. 1, 2021, amid a tornado warning for the area as the remnants of Hurricane Ida continued to impact the northeastern United States. Twitter user @dylansantiago6 posted this video showing what could be a tornado. (Credit: @dylansantiago6 via Storyful)

The highest rainfall amounts were expected to be in areas of Northeast New Jersey, the Lower Hudson Valley, and Southern Connecticut.

Abnormally wet conditions so far this summer have resulted in higher than normal streamflow and water tables, which elevates the flash flood threat. 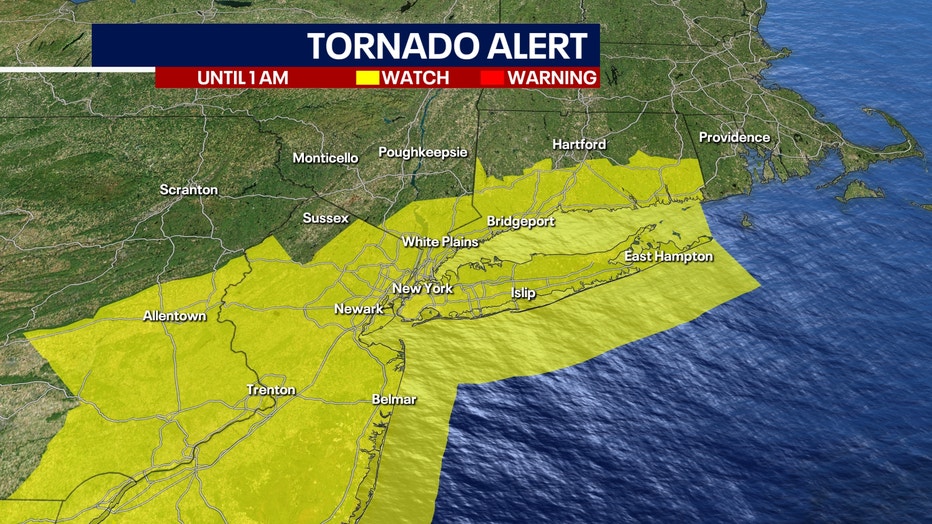 Ahead of the storm, MTA crews were positioned in flood-prone locations to monitor the situation. Direct sewer connections were inspected and street vents were covered at six key locations.

New York's utilities had approximately 5,500 workers available to engage in damage assessment, response, and restoration efforts across the state. Department of Public Service staff tracked the utilities' work throughout the storm and said it would ensure utilities shifted the appropriate staffing to the regions impacted the most. 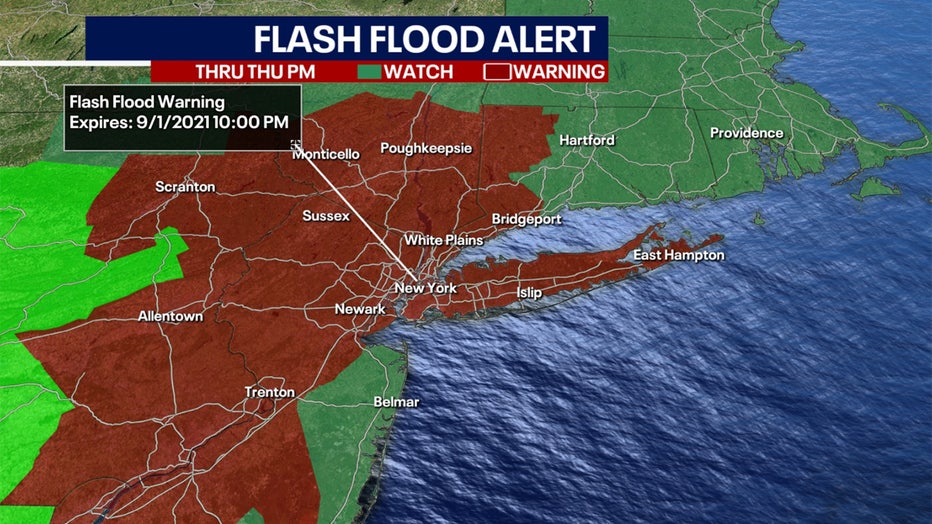 In Pennsylvania, Emergency officials rushed to evacuate about 3,000 people below a dam near Johnstown on Wednesday after hours of heavy rains triggered plans to ensure the safety of downstream residents. 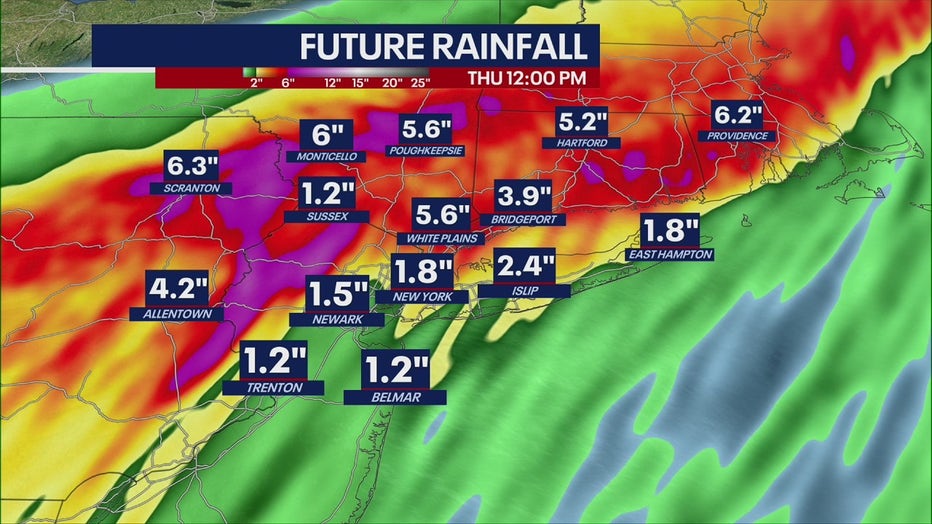 Rainfall forecast through Thursday at 12 p.m.

Wilmore dam "has reached the stage where the emergency action plan has called for us to mandate an evacuation in the inundation areas downstream from the dam," Martynuska said. Both dams are a few miles from Johnstown.  Evacuees were being taken to a nearby high school with help from the Red Cross, National Guard, local transit authority and school transportation services.

There were also other minor evacuations in Cambria County, Martynuska said.

Pennsylvanians were drenched by downpours and braced for high winds as the remnants of Hurricane Ida plowed through the state, inundating creeks, streams and rivers.

"Please, if you can stay home today, please stay home," Gov. Tom Wolf said at a news conference from the Pennsylvania Emergency Management Agency headquarters in Harrisburg. He warned that urban, river and flash flooding were expected through Thursday.

"The best thing all of us can do right now is to stay home and stay safe," Wolf said.

The risk for flash flooding across most of New Jersey was classified as moderate through Thursday.

A Gale Warning was posted for the Jersey shore, New York City, and the coasts of Long Island.

The forecast was not welcome to some areas of New Jersey that had to deal with flooding from the remnants of Hurricane Henri less than 2 weeks ago.

According to the National Weather Service, as much as 4-8 inches of rain fell across much of the center of the state, with small pockets receiving 7-10 inches.

Rain continued to fall across New York City Monday extending the danger from flooding that already wreaked havoc in the region.