Rain continued to fall across New York City Monday extending the danger from flooding that already wreaked havoc in the region.

NEW YORK - More rain fell on Monday from the remnants of Tropical Storm Henri  after it dumped an absolutely torrential amount of rainfall in the New York region area over the weekend. The rain also broke a record in New York City.

According to the National Hurricane Center, Henri was expected to produce isolated maximum totals near 12 inches.

In New York City, Brooklyn received 8.85 inches of rain, with Central Park in Manhattan getting more than 7.8 inches.   The Tremont section of the Bronx had 6.26 inches from the storm.

Little Neck in Queens had 7.11 inches while Howard Beach recorded 6.95 inches from the storm.

Parts of Staten Island received a little more than 5 inches.

On Long Island, Nassau County's Great Neck and Seaford had at least 6 inches of rain.  Port Washington and Wantagh had more than 5 ½ inches.  In Suffolk County the highest amounts were in Copiague where 5.73 inches of rain fell.

North of the city, Chester in Orange County had 6.90 inches and the U.S. Military Academy in West Point had just under 6 inches.  In Westchester County, New Rochelle recorded the most with 6.30 inches.  Tarrytown had 5.24 inches and Hartsdale had about 5 inches.

According to the National Weather Service, Henri made Saturday the rainiest day in New York City since 2014, with the majority of the 4.45 inches of rain falling over a 2-hour period. In just one hour, between 10 p.m. and 11 p.m. in Central Park, 1.94 inches of rain fell, making it the wettest hour on record for the city.

Large parts of New Jersey received more than 5 inches of rain, with Oakland in Bergen County getting 9.22 inches.  Harrison in Hudson County got 8.02 inches.  Jersey City had 7.28 inches.

In Passaic County,  Ringwood got 8.70 inches from the storm and West Milford had 8.20 inches.

Totals in Connecticut were not as dramatically high.  Danbury in Fairfield County saw 5.07 inches. Stamford received 2.73 inches of rain.

A Flash Flood Warnings were in effect for much of the tristate region for Monday.  An additional 1 to 3 inches of rain was forecast through Monday for parts of Long Island, New England, southeast New York, New Jersey, and eastern Pennsylvania. 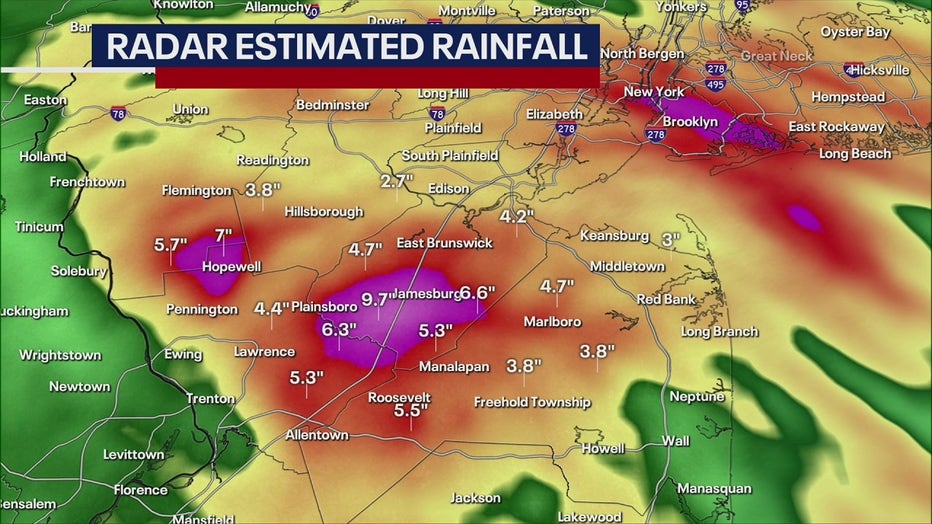