Audrey Puente has an update on the thunderstorms in the New York City area.

NEW YORK - A Flash Flood Watch remains in effect for part of the New York City area as fast-moving storms dumped heavy rain in some areas in a short amount of time. The watch is in effect until 10 a.m. on Tuesday for all of northeast New Jersey, most of southeast New York, and a small portion of southern Connecticut. A Flood Warning is in effect for several counties.

A nearly stationary frontal boundary combined with a hot and humid air mass sparked some thunderstorms with heavy rain in the area on Monday, according to the National Weather Service. Rainfall amounts could be highly variable, but a general 1 to 3 inches of rain with locally higher amounts is possible through Monday night.

Heavy rain in a short period of time may cause streams and creeks to rise quickly out of their banks. There is also the potential for flash flooding across more urbanized areas and those areas with poor drainage.

"Scattered to numerous showers and thunderstorms are expected to develop this afternoon near a frontal boundary over or just south of the watch area," NWS said in a bulletin. "The front will continue to focus shower and thunderstorm over the watch area tonight, especially in and around the New York City Tri-State area. This rain will be falling in areas hard hit by heavy rain and flash flooding late last week." 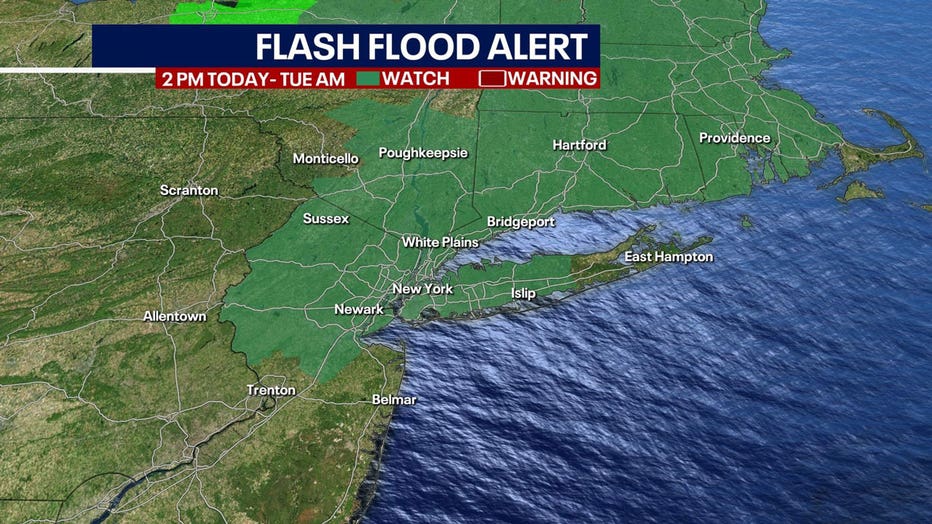 Potential Flooding on Roads and in Subway Stations

Last week, thunderstorms caused a lot of flooding in the area, including on highways in and around New York City and inside the subway system. (SEE COVERAGE BELOW.)

The Metropolitan Transportation Authority (MTA), which runs the subway system, says it is taking extra steps to avoid another widespread flooding problem. Officials say that subway personnel will be at "key locations" to help coordinate any response needed for weather-related issues.

"Crews will inspect track drains in flood-prone areas and check and stage track pumps and storm boxes prior to the storms," the MTA said in a statement. "Chainsaws will be prepared, fueled and tested for possible debris clearance."

Several roadways in and near the city are prone to flooding, including the Major Deegan Expressway, the FDR Drive, the Harlem River Drive, the Hutchinson River Parkway, and others.

"Heavy rainfall will cause flooding of small creeks and streams, urban areas, highways, streets and underpasses as well as other drainage areas and low lying spots," an alert from Notify NYC states. "Do not drive your vehicle or walk into areas where water covers the roadway as the water depth may be too great to allow you to cross safely."

Counties Under the Flash Flood Watch

What Is a Flash Flood?

A flash flood is a "sudden violent" flood that happens very quickly — generally within six hours of the cause but often within minutes, according to the NWS. The causes of flash floods can be heavy rain, ice or debris jams, and levee or dam failure. One of the most common causes is heavy rainfall from thunderstorms.

"This can also occur when slow-moving or multiple thunderstorms move over the same area. These sudden downpours can rapidly change the water levels in a stream or creek and turn small waterways into violent, raging rivers," NWS states. "Urban areas are especially prone to flash floods due to the large amounts of concrete and asphalt surfaces that do not allow water to penetrate into the soil easily."

Sometimes flash flooding can happen far away from where the heavy rain actually fell.

"This is especially common in the western United States where low lying areas may be very dry one minute, and filled with rushing water from upstream the next," NWS states.

What Do Flash Flood Alerts Mean?

A Flash Flood Watch means that weather and/or other conditions may soon develop that can cause flash flooding.

"Flash flooding is a very dangerous situation," NWS states. "You should monitor later forecasts and be prepared to take action should flash flood warnings be issued."

A Flash Flood Warning means that a flash flood is either imminent or already underway. When the NWS issues this warning, it wants you to take action now.

"If you are in a flood-prone area, move immediately to high ground," NWS states.

People are asking why subway stations got so badly flooded during heavy rainfall on Thursday.