NEW YORK - The weather phenomenon that we call a nor'easter, also known as a northeaster, is a type of potentially powerful storm that affects the East Coast of the United States and Canada. The storms are known for especially impacting the very heavily populated region connecting Washington, D.C., Philadelphia, New York City, and Boston — the so-called Northeast Corridor.

Nor'easters are very serious and potentially dangerous weather events, which are most intense in the winter and can bring large amounts of snow and rain to your community. Here is everything you need to know about nor'easters and why you should prepare for them, especially during the winter months.

Why is the East Coast perfect for nor'easters?

An area of low pressure develops within 100 miles — east or west — of the coast of the southeastern United States, typically in the latitudes between Georgia and New Jersey.

"During winter, the polar jet stream transports cold Arctic air southward across the plains of Canada and the United States, then eastward toward the Atlantic Ocean where warm air from the Gulf of Mexico and the Atlantic tries to move northward," the National Weather Service says. "This difference in temperature between the warm air over the water and cold Arctic air over the land is the fuel that feeds nor'easters."

So when that warm air collides with cold air coming down from Canada, the storm intensifies and winds pick up to 50 mph or greater.

Why are these storms called nor'easters?

The strongest winds that move around the low-pressure area typically come from the northeast, hence the name nor'easter or northeaster.

When do nor'easters happen?

Although nor'easters can happen at any time of the year, they are most common between September and April when the jet stream is stronger. So nor'easters are usually most severe during winter.

Yes, nor'easters can be very serious, even dangerous.

The National Weather Service says nor'easters nearly always dump heavy rain or snow on the affected area as well as gale-force winds. The storm's wind gusts can be even stronger than hurricane-force winds.

"If you can get a nor'easter to stall out off the coast, you can have extreme coastal flooding," meteorologist Steven DiMartino, the owner of NY NJ PA Weather, says. "And some damage that could last years before they can get any recovery." 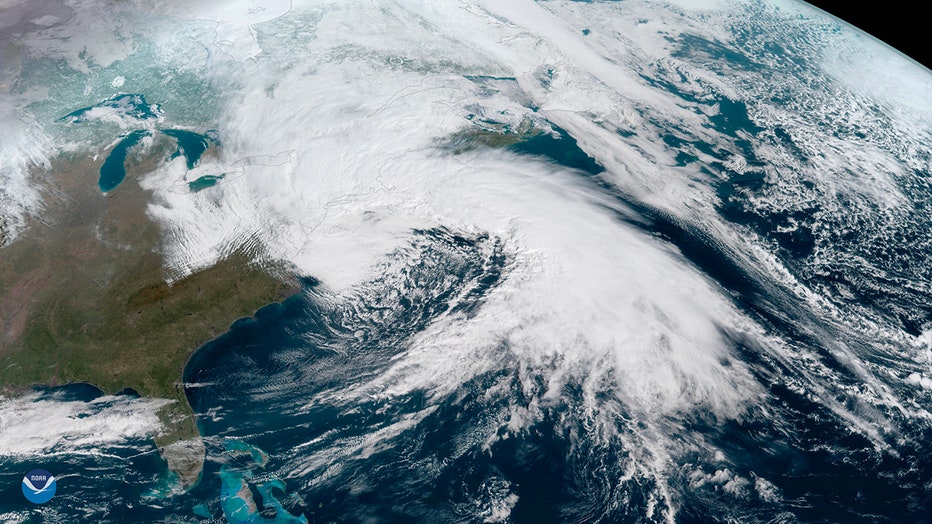 Nor'easters usually produce a mix of snow, sleet, and rain. But not every nor'easter brings snow. Each element depends on the storm track.

"What we look for is what we call the 'benchmark, which is about 40 North 70 West. If a low-pressure system tracks through that benchmark, it's far enough off the coast to keep cold air in place and also draw moisture into the region, allowing for snowfall," DiMartino said. "If the track is closer to the coast, that allows warm air to invade the coast that leads to a changeover to rain."

So, can a nor'easter produce a blizzard? Well, the National Weather Service defines a blizzard as "considerable falling and/or blowing snow" with sustained wind or frequent gusts to at least 35 mph for 3 hours or longer.

A nor'easter can produce heavy snow and winds over 50 mph lasting hours.

Why should I pay attention to nor'easters?

"Basically, it's the worst place possible to have a major storm like this," DiMartino says. "Even though it may not directly impact you, it impacts everyone because of shipping delays and also travel concerns."

Weather forecasters at the National Weather Service offices closely monitor the development and progress of nor'easters, especially in fall and winter. If certain conditions are likely, these forecasters may issue a number of weather alerts for counties in the path of a storm.

What's the difference between a watch and a warning?

In other words, a watch is something to "watch out" for. But a warning is for something happening now.

"A warning means weather conditions pose a threat to life or property," National Weather Service. "People in the path of the storm need to take protective action."

You can get weather alerts on your mobile device through the Fox 5 weather app.

In its glossary, National Weather Service summarizes a nor'easter in this four-sentence definition: "A strong low pressure system that affects the Mid Atlantic and New England States. It can form over land or over the coastal waters. These winter weather events are notorious for producing heavy snow, rain, and tremendous waves that crash onto Atlantic beaches, often causing beach erosion and structural damage. Wind gusts associated with these storms can exceed hurricane force in intensity. A nor'easter gets its name from the continuously strong northeasterly winds blowing in from the ocean ahead of the storm and over the coastal areas."