NEW YORK - This story is no longer being updated.  CLICK HERE FOR LATEST NY SNOWSTORM COVERAGE

Winter Storm Warnings  are posted for much of the New York City region ahead of a potential nor'easter winter storm that could bring snow, wind, and coastal flooding.

Blizzard Warnings are also in effect from Friday 7 p.m. until Saturday 7 p.m. for Atlantic County, Cape May County, Ocean County and Monmouth County in New Jersey.  The National Weather Service considers the risk of blizzard conditions along the coast as extreme.

Blizzard Warnings are also posted for Suffolk County.  The National Weather Service says heavy snow and 60 mph winds are possible on the east end of Long Island during the storm.

NY and NJ declare State of Emergency ahead of winter storm

Snow will get steadier and heavier overnight tonight, bringing possible blizzard conditions to some parts of the region as a nor'easter blows into the area.

New York Governor Kathy Hochul announced a State of Emergency for the state beginning at 8 p.m. on Friday.  She also announced that all Long Island Rail Road (LIRR) service would be suspended during the storm.

New Jersey Governor Phil Murphy has declared a State of Emergency beginning at 5 p.m. on Friday.  He urged all New Jersey residents to stay off roads.

The powerful nor'easter will develop off the East Coast today and is expected to bring heavy snowfall to New Jersey, New York, the Jersey Shore, eastern Long Island, and New England. (What is a nor'easter? Here is what you need to know.)

"Snow may be heavy at times through early Saturday afternoon before diminishing late in the day. Winds may generate areas of blowing snow and low visibilities at times," the National Weather Service said. "The storm total snow forecast remains a bit uncertain as there will likely be a sharp cutoff in the northwest extent of the highest snowfall totals, so stay tuned to the latest forecasts."

A watch does not mean a large snowfall is guaranteed. Watches mean there is the potential to see moderate to heavy snow. Warnings mean that there is more of a likelihood that the storm will have greater impacts.

Portions of central and southern New Jersey could see total snow accumulations of 6 to 16 inches with winds gusting as high as 50 mph. 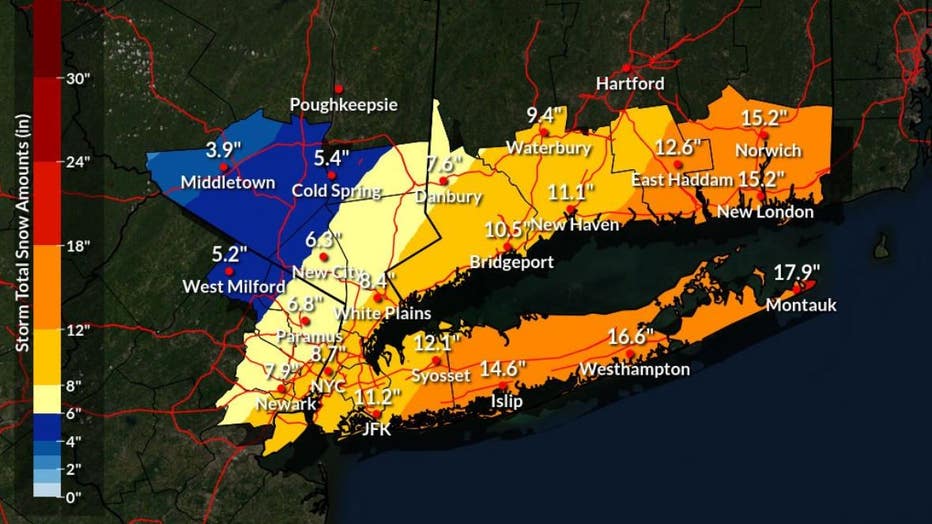 In northern New Jersey, total snow accumulations of 10 to 16 inches are possible with winds gusting as high as 35 mph.  Areas along the Jersey Shore could see 18 inches of snow.

The current forecast shows that eastern Long Island and southeastern Connecticut could get 16 to 20 inches of powdery snow with snowfall rates of 1-2 inches per hour at the storm's peak intensity. Travel will be difficult and near-blizzard conditions are possible. Forecasters expect scattered downed tree limbs and power lines and some downed trees. That means power outages are possible.

Meteorologist Audrey Puente says there is the threat of a few flakes today ahead of a big winter storm beginning tonight. New York City could see 6-10 inches of snow with higher totals east of the city. Today's high is 35.

"Confidence is increasing for a strong storm system to bring moderate to heavy snowfall and strong winds to much of the area Friday night through Saturday," the National Weather Service said.

On the ocean, there could be gale conditions. Seas of 10-15 feet are expected. Seas of 4-6 feet in the central and eastern Long Island Sound. 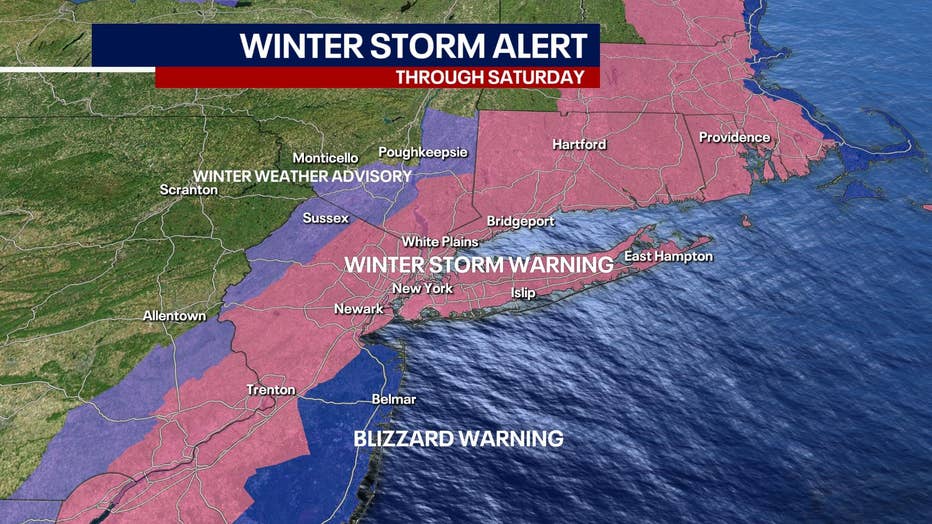 The nor'easter is expected to intensify into a bomb cyclone, a term used to describe a low-pressure system that undergoes "bombogenesis" – defined as a rapid pressure drop of at least 24 millibars in 24 hours or less – indicative of a very intense storm.

The peak winds will be on Saturday morning into early Saturday evening.

The coastal flooding risk will be highest at high tides on Saturday and Sunday morning.

Ocean storm impacts will be greatest from Friday night until Saturday night.

Nor'easters in NYC area: What you need to know

A nor'easter, also known as a northeaster, is a type of potentially powerful storm that affects the East Coast of the United States and Canada. The storms are known for especially impacting the very heavily populated region connecting Washington, D.C., Philadelphia, New York City, and Boston. Here is more you need to know about how nor'easters affect the NYC area.