NEW YORK - A number of high-profile events have been either postponed or canceled as the U.S. sees a rise in COVID-19 cases, beginning to be fueled by the omicron variant.

Omicron has raced ahead of other variants and is now the dominant version of the coronavirus in the U.S., accounting for 73% of new infections last week, federal health officials said Monday.

In much of the country, it’s even higher. Omicron is responsible for an estimated 90% or more of new infections in the New York area, the Southeast, the industrial Midwest and the Pacific Northwest. The national rate suggests that more than 650,000 omicron infections occurred in the U.S. last week.

Here is a look at what’s canceled, closing or changing across the country as cases continue to rise.

"We regret that we are unable to continue the Christmas Spectacular this season due to increasing challenges from the pandemic," the Rockettes posted on Twitter.

New York City Mayor Bill de Blasio announced an incentive for residents to get the COVID-19 booster vaccine. From now until the end of the year at city run vaccine hubs, residents will get $100 in their bank accounts for getting the vaccine booster.

Mayor-elect Eric Adams has canceled his plan to hold his inauguration at the Kings Theater in Flatbush, Brooklyn due to rising coronavirus cases in the city. He said it will be rescheduled at a later date.

RELATED: COVID cases are surging nationwide, creating major obstacles ahead of the holidays

Plans for the New Year's Eve ball drop in Times Square will be scaled back, sources told FOX 5 New York. There will likely be a reduced capacity and masks will be worn by all, sources with knowledge of the plans tell FOX 5 New York reporter Robert Moses.

"Saturday Night Live" cancelled its in-person audience last week. The long-running sketch comedy show announced on social media Saturday afternoon that the night’s episode, featuring "Ant-Man" star Paul Rudd as host, would tape without a live audience and with only limited cast and crew "due to the recent spike in the Omicron variant and out of an abundance of caution." 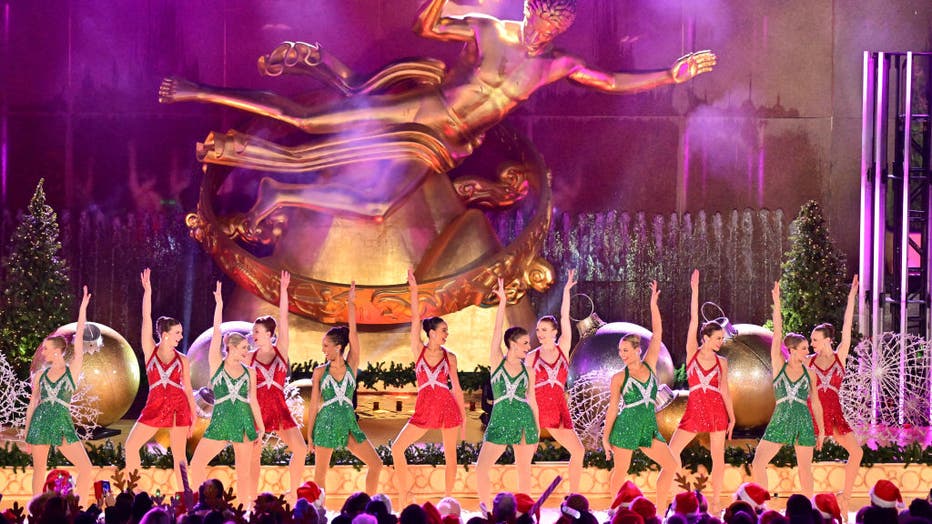 New York City is seeing a surge in COVID-19 cases as the omicron variant spreads. The city saw the number of cases double in three days and then set a one-day record for the entire pandemic on Friday.

The large New Year’s Eve event in downtown Los Angeles at Grand Park is canceling its live audience for the celebration due to the variant. This year, the celebration was supposed to feature 5,000 first responders to honor them for their service. The event normally held 75,000 people pre-pandemic.

While there will no longer be a live audience, the event will be produced as a broadcast and streamed program as previously planned and will be accessible to everyone on Fuse and on Grand Park’s YouTube channel at 11 p.m. PST on Friday, December 31, 2021.

Performances for A Christmas Carol at the Ahmanson Theatre in downtown Los Angeles through Dec. 26 have been canceled after additional breakthrough cases were detected within the company, the Center Theatre Group announced. Performances are scheduled to resume on Dec. 28.

In Washington, D.C., Mayor Muriel Bowser reinstated the city’s mask mandate and has expanded the District’s vaccine requirements as part of a State of Emergency she declared Monday, FOX 5 DC reported. Bowser said D.C. will reinstate the citywide indoor mask mandate at 6 a.m. Tuesday and will keep it in place through January 31. The Mayor has also expanded the District’s vaccine mandate for D.C. Government works to include the booster shot. Bowser also said workers will no longer have the ‘test out’ option available.

California issued an indoor mask mandate in early December ahead of the busy holidays citing a nearly 50% increase in COVID-19 cases throughout the state Angel Share HTX was just one of several Houston businesses who had to shut down last weekend over COVID-19 concern.

Southwest CEO says masks 'don't add much, if anything' against COVID-19 on planes

Southwest Airlines CEO Gary Kelly told a U.S. Senate panel on Wednesday that "masks don't add much, if anything" in fighting the spread of COVID-19 on airplanes, calling into question the reasoning behind mask mandates on flights imposed both by airlines and the Biden administration. Kelly made the comment during a hearing on airline oversight before the Senate Committee on Commerce, Science and Transportation, and other industry chiefs joined him in emphasizing that commercial aircraft filtration systems make them the safest indoor space there is.

"Thursday night, we got all exposed, and it wasn't just like one person. It was like four or five people who tested positive that were in the bar, that had contacted all of us, so I was like, we got to shut it down," said Mary Ellen Angel, the owner of Angel Share HTX.

According to FOX 26 Houston, multiple live performances of The Little Mermaid at the Hobby Center and A Christmas Carol at the Alley Theatre were canceled. Rice University has postponed two men’s basketball games.

Schools close while other switch to remote learning

Georgetown University, for example, is restricting all indoor campus dining to a "grab-and-go" model, where students pick up their food in a dining hall and eat in their private room. The university is also closing fitness centers, and has canceled all events if they cannot be held outdoors or online.

Five Washington, D.C. public schools announced they will be closed for deep cleaning and shift to virtual learning for the week due to COVID-19, District of Columbia Public School official announced on Monday.

The decision to move to virtual learning was made to decrease the likelihood of spreading COVID-19, due to the school community reporting that 3% or more of the total school population has tested positive for COVID-19 within a 14-day period.

Several schools in Minnesota have extended their winter breaks as districts throughout the state continue to deal with COVID-19 surges and staffing shortages.

Winter break extension proposals in Minnesota are still up in the air at some schools, while others have already made adjustments to childcare availability, food services, activities and more.

A few Week 15 games in the National Football League have been rescheduled for Tuesday due to an ongoing COVID-19 outbreak.

Two games will be played Tuesday night. The Los Angeles Rams will take on the Seattle Seahawks and the Washington Football Team will travel to Philadelphia to face the Eagles.

Both games were originally slated to be played Sunday, but will now take place Tuesday at 7 p.m. ET Viewers can watch on FOX or NFL Sunday Ticket.

Previously, the NFL didn’t intend to move any games because of coronavirus outbreaks. The league stated forfeits "could be in play." But this weekend’s games were in doubt after over 100 players testing positive for COVID-19 in recent days.

The Philadelphia Flyers game against the Washington Capitals has been postponed Tuesday as a result of rising COVID-19 cases within the league.

The National Hockey League announced Tuesday that "due to COVID-19 issues affecting the Washington Capitals" the previously scheduled game for Tuesday evening will be postponed.

The NHL is beginning a league-wide shutdown Wednesday amid an increase of positive COVID-19 test results among players across the league.

As of Tuesday, the NHL has postponed 49 games. Two games slated for Tuesday are still set to go on as scheduled. According to the Associated Press, the NHL is now shut down from Dec. 22 through Christmas.

The league and NHL Players’ Association on Sunday said in a joint statement they were attempting to avoid a league-wide shutdown and were making decisions on a team-by-team basis. The latest shift gives all 32 teams an extended break before players, coaches and staff can gather again Sunday to skate and undergo coronavirus testing.

Over 15% of the league’s 700-plus players are in virus protocol, and the resulting schedule disruption almost certainly has doomed the possibility of Olympic participation.

Southern Methodist University’s (SMU) basketball game scheduled for Tuesday night has been canceled due to COVID-19 cases with their opponent. SMU was scheduled to host the University of Evansville at Moody Coliseum, but the game was called off Monday morning.

SMU said the game had to be canceled due to positive cases on the Evansville team that has forced that school to temporarily pause the season.

Grand Canyon University's men's basketball game at Nevada has been canceled due to COVID-19 issues within the Antelopes' program, the school announced on Dec. 21.

Currently, there isn’t a plan to reschedule the game. GCU's next game is scheduled for Dec. 30 against Chicago State in Phoenix.

UCLA's men's basketball game against North Carolina planned for Dec. 18 in Las Vegas was canceled due to COVID-19 developments within the Bruins' program, the university announced last week.

The planned game against North Carolina is UCLA's second in four days not to be played because of coronavirus issues. The game against Alabama State planned for Dec. 15 night at Pauley Pavilion was also called off, according to FOX LA.

This story is developing. Check back for updates. The Associated Press contributed.