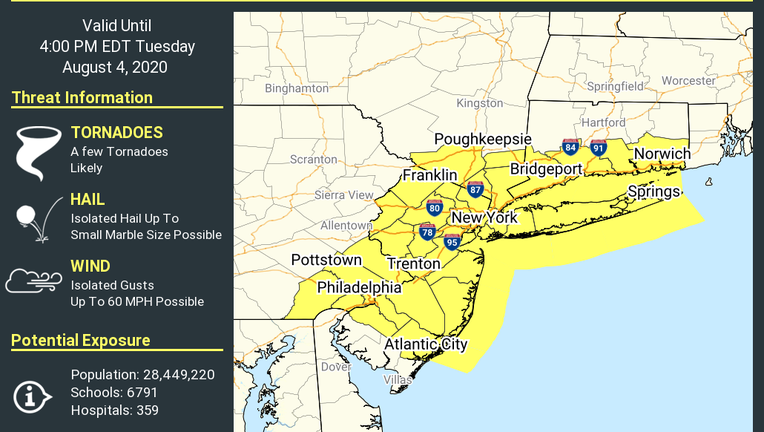 NEW YORK - The National Weather Service issued a Tornado Watch until 4 p.m. Tuesday for New York City, Long Island, New Jersey, and a portion of Connecticut. (The watch has officially expired.) A watch indicates that conditions are favorable for a tornado to form. Exercise caution when walking, biking, or driving.

Tornadoes can cause flying debris, turn unsecured objects into projectiles, and cause power outages. The National Weather Service said tornadoes were reported in New Jersey, Virginia, Maryland and Delaware.

It's advisable to take certain precautions before a tornado strikes including charging cell phones, gathering supplies and turning refrigerators/freezers to a colder setting.

If you experience a power outage during a tornado, stay clear of downed power lines, turn off all appliances, keep refrigerator/freezer doors closed to prevent food spoilage, and do not use generators indoors.

If you have a disability/access needs, or use life-sustaining equipment (LSE) and need immediate assistance, dial 911.

Tropical Storm Isaias, which is headed up the eastern seaboard, is sparking watches and warnings of severe weather across the region.

New protections including tiger dams for storm surge could be put to the thest Tuesday as Tropical Storm Isaias heads towards the region. Robert Moses reports.

There is a threat of very heavy rainfall, powerful winds, and flooding along the coast.

The impact of a tornado can include: