Nick Gregory has the weather.

NEW YORK - Severe weather including storms and even a slight chance of tornadoes is forecasted for the New York City region beginning Monday afternoon.

A Severe Thunderstorm Watch was posted until 8 p.m. Monday for eastern Pennsylvania, most of New Jersey, New York City and its northern suburbs, Nassau County on Long Island, and southwestern Connecticut. The coverage area affects more than 26 million people.

The National Weather Service's Weather Prediction Center said some thunderstorms in the Mid-Atlantic and Northeast may be severe. The weather will quickly deteriorate in the afternoon. We will have a line of showers and storms coming through with heavy rain, damaging winds, large hail, flash flooding, and isolated tornadoes.

"Heavy rainfall may develop over parts of the interior Northeast," the Storm Prediction Center said in a message. "A [slight risk] of excessive rainfall is in effect over northeastern New York and much of Vermont as a result."

The cluster of storms is coming from the Ohio River Valley and will impact NYC, Long Island, New Jersey, and Connecticut.

No Severe Thunderstorm Warnings were posted yet in the downstate region but upstate areas already had warnings.

Thunderstorms will generally be between 2 p.m. and 7 p.m.

On Eastern Long Island and southern Connecticut, the thunderstorms will generally be between 6 p.m and 9 p.m.

Wind gusts in excess of 58 mph could damage trees and power lines and result in scattered power outages.

Large Hail: Hail as large as ping-pong balls could fall and damage cars.

The NYC Emergency Management Department issued a travel advisory ahead of the storm. It warned that periods of heavy rain could cause flooding in the city, including highways, streets, basements, and underpasses.

During periods of heavy rain, officials warned people to seek higher ground or, if in a basement, move to a higher floor. The alert said that city agencies have taken action to clean catch basins and remove street litter in the event heavier rain occurs.

New York City area airports were reporting delays of more than an hour due to weather.

In New Jersey, the National Weather Service puts the biggest chance of severe storms in the very northwest part of the state down to the Trenton area between 3 p.m. and 5 p.m.

In the eastern part of the state from the north to the south will be between 4 p.m. and 8 p.m.

The Garden State could see numerous severe storms with wind gusts of up to 60 mph. Large hail is also possible in New Jersey along with isolated tornadoes. 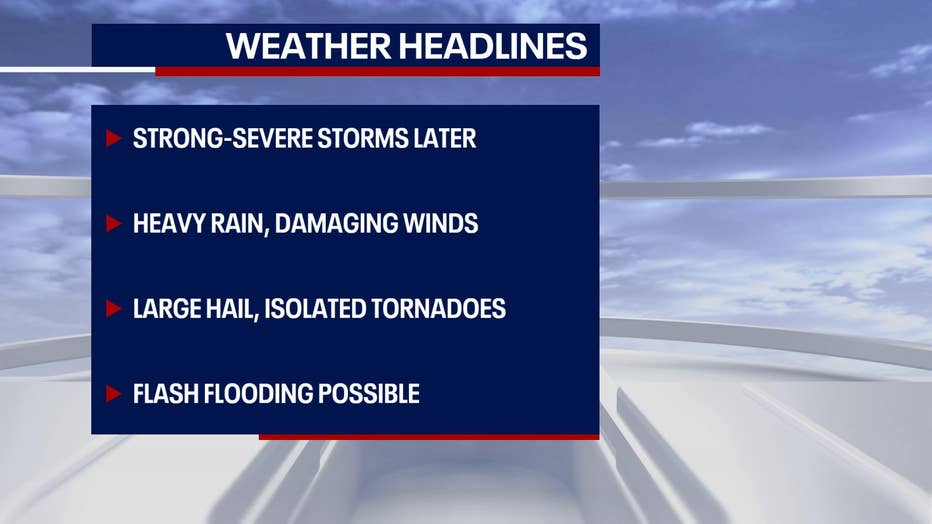 Supercells are caused when a cold front hit areas with high temperatures.  Much of New Jersey had already warmed into the 70s by noon.

The air mass over the region is still expected to further destabilize Monday afternoon. As it does, a few stronger updrafts may start to take place in the warm air.  Moderate shear is in place, so any stronger, more persistent updrafts could organize, and the potential for a few supercells capable of isolated hail and damaging wind gusts exists. 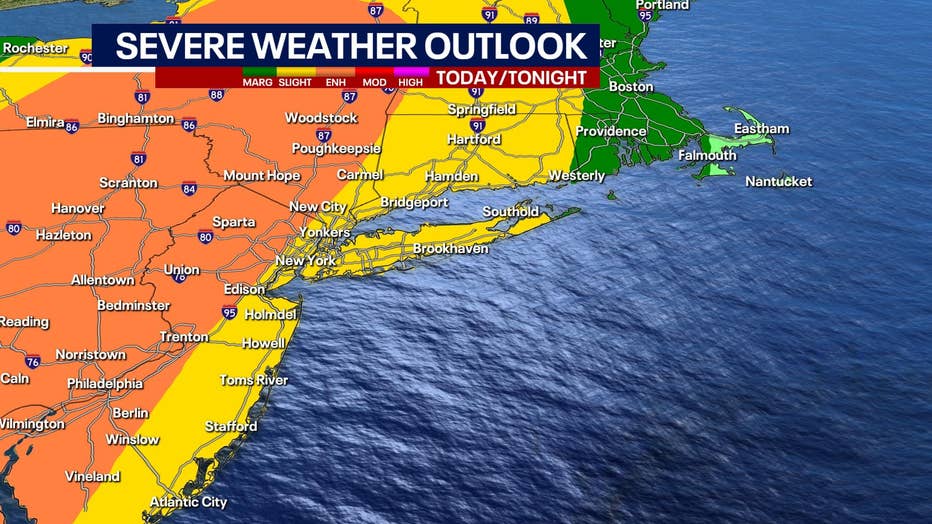