"No human error, no waste, and very consistent"

Robot cooks coming to a restaurant near you

NEW YORK - It's the art of making a slice of pizza with the efficiency of a machine.

"It's our robot assembly line," said Darryl Dueltgen, the founder of PizzaHQ. The shop in Woodland Park, New Jersey is rewriting the menu when it comes to making a pie.

He says the shop can produce more than 300 pies an hour.

"A laser sees exactly how big the pizza is, puts the exact amount of toppings, sauce, cheese, pepperoni as many toppings as you want and then it comes out the other side with no human error, no waste, and very consistent, which is one of the issues with a regular pizzeria."

Automation in the kitchen has become more popular during the national labor shortage, especially when it comes to skilled workers in the kitchen. A shift to using more robotic technology makes repetitive tasks a bit more efficient and certainly more cost-effective in the long run. Many business owners also say it allows other workers to do more important roles within a restaurant.

"When you're in a restaurant, and you're one person down, you probably are going to miss expectations for what that guest is expecting because that restaurant was designed for. A certain number of people to come together to get your order," said Jake Brewer, Chief Strategy Officer at Miso Robotics.

The company is transforming the industry with robotics and intelligent automation - from drinks to fries and even chips. The products are being used in restaurants like White Castle, Jack in the Box , and Chipotle.

Miso says it is on a mission to bring the commercial kitchen into the current era.

"When you look at our product lineup, we have Flippy to which is focused on the fry station and filling that gap," Brewer said.

The machine is engineered to fry and flip nearly anything on its own - without much human assistance. The company also makes the "Chippie" -- or "Flippy Lite" because it focuses on solving chip issues for companies like Chipotle - which does "batch cooking" of chips in the morning.

Robot fast-food chefs: Hype or a sign of industry change?

There's also the "Sippy Machine." Brewer says that one does exactly what it sounds like.

"So it takes the order fills the cup lids, the cup and groups it so the person just has to turn around (and) grab," Brewer says.

From the commercial kitchen, we move to something that could eventually end up in the home.  Well, maybe not just any home as you will need a few hundred thousand dollars for this robot.

It's from a company called Moley Robotics and, for as much as $340,000, innovators here created the world's first fully robotic kitchen.

"We have a dedicated place for cooking, we have some number of cooking tools and appliances and we have motion, like a motion which is done by human now," said Dr. Mark Oleynik, the company founder who is a computer scientist with a background in healthcare innovation.

The product moves like a human arm, but this is all automated. It's filled with data base of recipes, from top chefs, brought to life by machine - everything from steaks, pastas, fine cuisine.

It's offering range from appetizers to full meals.

"Our kitchen is duplicate, it recreates the dish so generally, it copies the chef movements on the same environment to get the same result," Dr. Oleynik. 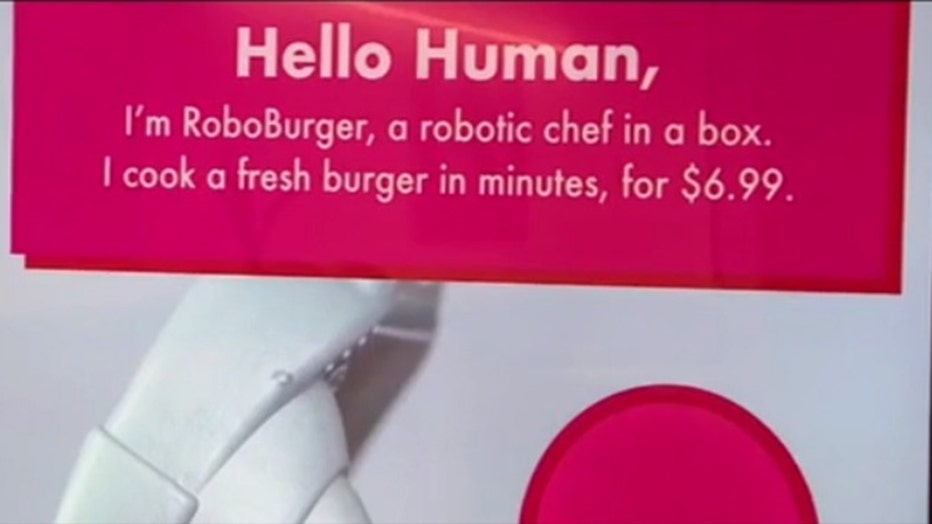 The Robo-Burger cooks up hamburgers at the Newport Mall in Jersey City, N.J.

Before we go back to taste that robotics slice of pizza at PizzaHQ in Woodland Park,  we've also got to tell you about you a burger that comes from a vending machine!

The Robo-Burger is designed by former college roommates Audley Wilson and Dan Braido. It's a burger vending machine grilling up a fresh patty with the push of a button at the Newport Mall in Jersey City and a new location at a University in Queens.

"We've been friends for a long time and focused on reinventing the food industry and produced this," Wilson said.

And that brings us back to what's going on in the kitchen of PizzaHQ in New Jersey.

They've contracted with food service companies across the North Jersey area to provide cafeteria slices faster and more efficiently than most traditional shops. They also have become popular with party spots and can serve up pies for any occasion.

So,  about a bite of that slice? I gave it a try. It was tasty and delicious - and the pepperoni was just crispy enough (how I like it) -- definitely worth a try.

Robot can make 300 pizzas an hour