Yes, marijuana is legal in New York. But you need a license from the state to sell it. The mayor said education and not incarceration is at the core of his plan to stop smoke shops, bodegas, and pop-up stores from illegally selling cannabis.

NEW YORK - After New York legalized the sale of recreational marijuana, dozens if not hundreds of businesses around the city began openly selling cannabis products without a license. Indeed, the state's cannabis agency has only just recently started issuing licenses to applicants who have met a list of specific criteria.

So what do the city and state plan to do about the proliferation of unlicensed shops?

"To those who believe that this is going to become the 'Wild, Wild West' of cannabis sale, we are saying clearly and loudly, 'No it is not,'" Mayor Eric Adams said on Thursday.

The mayor said education and not incarceration is at the core of his plan to stop smoke shops, bodegas, and pop-up stores from illegally selling cannabis.

"All they know is weed is now legal," Adams said. "Yes it's legal but there's process."

The mayor said places caught selling cannabis without a license will get a verbal warning and the cannabis will be confiscated.

"It's time the unlicensed stores stop selling illegal products and comply with the law," he said.

To those who believe that this is becoming the "Wild, Wild West" of cannabis sales, we are saying clearly and loudly, "No it is not."

City Council Member Gale Brewer told FOX 5 News that neither the city nor the state have the staff to execute the mayor's plan. Selling illegal pot and weed is so pervasive in her district on the West Side that she hosted a town hall meeting about it earlier this week.

Right now, enforcement is up to the New York City sheriff.

"He only has a little, only 100 staff members, and there are these smoke shops everywhere," Brewer said.

The sheriff's cannabis task force recently carried out a series of busts, seizing illegal products with a street value of about $4 million.

FOX 5 News was there as the New York City Sheriff's Department cracked down on the illegal sales of marijuana at various businesses in New York City.

Cannabis Association of New York board member Owen Martinetti said that is just a drop in the bucket.

"I mean, there are stores that are doing north of $1 million a month," Martinetti said. "Sort of puts that in perspective — it's not a small amount."

Martinetti would like the state to hurry up and allow the licensed cannabis sellers to operate. He said even that won't do much to offset the illegal sale of cannabis in the city.

"I think it's great that they're promoting that there are going to be penalties and you're not just going to get away with this, but ultimately, it's not enough," Martinetti said. "And there's not any stores open as an alternative." 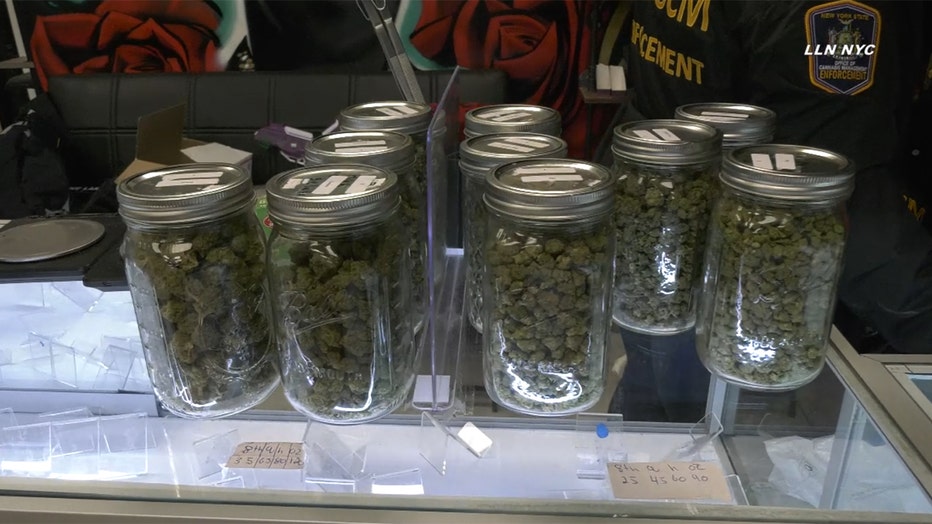 During the pilot, the task force

"The New York City sheriff's task force was successful in seizing hundreds of illegal products that were being sold by unlicensed businesses, many of which had the potential to endanger the health and safety of the public," Miranda said in a statement. "We have an obligation to support the legal cannabis industry and create a fair opportunity for legal dispensaries to succeed, and that means taking enforcement action against those who continue to operate illegally by selling contraband and evading taxes."