FOX 5 News was there as the New York City Sheriff's Department cracked down on the illegal sales of marijuana at various businesses in New York City.

NEW YORK - New York City Deputy Sheriff Jose Marzan geared up and joined a convoy to 86th Street in Bay Ridge Brooklyn. He’s part of a new Joint Task Force that includes the Office of Cannabis Management, the NYPD and DCWP - the Department of Consumer and Worker Protection.

New York City Sheriff Anthony Miranda says his department has gone after illegal, untaxed cigarettes for more than 25 years but they now have a new duty: enforcing the laws that ban the sale of flavored vape products and marijuana in the hundreds of smoke shops now found in every borough.

In this instance, they found hundreds of illegal flavored vape products, some with bright colors and catchy names.

Deputy Sheriff Jose Marzan tells us, "In this bag is a whole bunch of flavored vapes, all different flavors, stuff like this they’re not supposed to have."

New York City law prohibits their sale. They were confiscated. They also found that regular cigarettes being sold were counterfeit and did not have the required tax seal, so they were confiscated too, adding to the penalties and fines the store owner fill face, fines that could amount to tens of thousands of dollars.

Why are they checking all the licenses?

Miranda says, "Again this is part of our normal inspections. You see signs that say cigarettes for sale, they have to be licensed and they have to make sure they’re not counterfeit as well. So we inspect all the licenses that are issued to the store to insure they’re in compliance, and for all the illegal products we see then we issue notices of violation, and depending on the level of the criminality, they can either see criminal court or be subject to an arrest."

Part of the store inspection also includes a search for traps or hidden compartments where marijuana can be stashed for later sales.

One location had hidden storage compartments, but no marijuana was found.

A day earlier, the Task Force says it found 100 pounds of what was being sold as marijuana stored on a floor in the basement of a Queens smoke shop. The alleged seller was arrested. Stores can rake in as much as $10,000 a week from marijuana sales.

First Deputy Commissioner Maureen Kokeas says, "It's incredible the pounds and pounds of marijuana illegally being sold, and it's completely unregulated."

With the legal retail sale of marijuana expected to begin in January, some smoke shop owners are trying to get an early start, but it could cost them a hefty fine or their freedom, says Sheriff Miranda.

"Everybody should know that it is against the law to sell marijuana in New York CIty. They decriminalized it, so that normal, everyday people wouldn’t get arrested for it, and they can have up to 3 ounces," Miranda says. "Anything that we find in these commercial establishments, if they rise to the felony weight, they can still be arrested for the illegal sale and possession of marijuana."

FIrst Deputy Sheriff Maureen Kokeas says, "These people have been selling before any licenses have been issued at all, and the locations that we’re in right now, today, none of these locations have applied for or received licenses from the state." 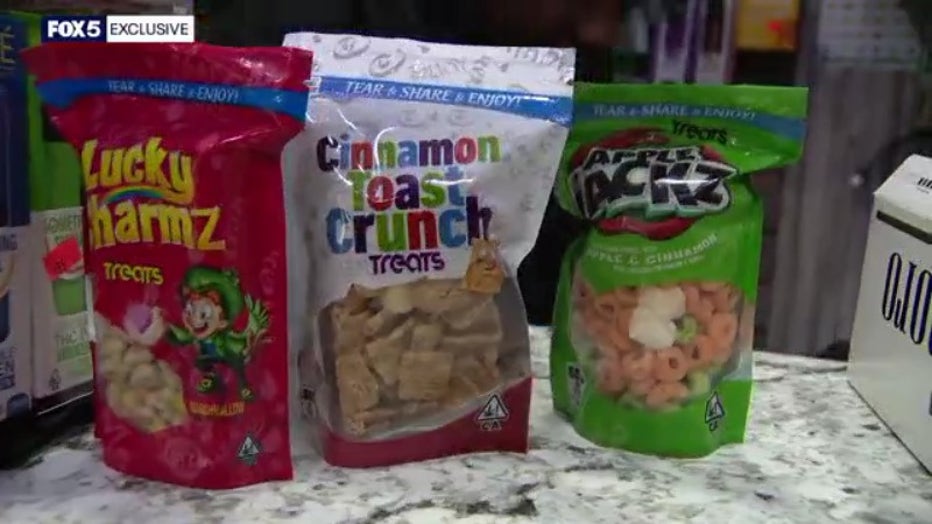 Authorities say cannabis is being marketed to children in packages that are similar to popular foods.

A major concern of the task force is the way the unregulated products, especially edibles, are marketed to children with names like Lucky Charmz, spelled with a Z. At a Fort Hamilton Parkway store, individual marijuana cigarettes were sold in a prescription bottle, a big candy jar full of small bags of marijuana, products claiming to contain THC and lots of snack bags.

The sheriff says the snack bags, which contain brand names familiar to children, actually contain what are believed to be edibles, including a fake stamp of safety from the State of California.

"The packaging that we’re seeing, especially with the THC edibles is really, really concerning because they’re obviously geared to market towards children  and there’s no regulation as to what’s in these products. Edibles are never meant to be marketed towards children that mimic legitimate products," says First Deputy Commissioner Maureen Kokeas.

Sheriff Miranda says this type of action is part of a wholistic approach towards dealing with public health and crime issues. He says the ultimate goal is the safety of the community, especially the children.