In recent weeks, New York's hotel occupancy and museum attendance that had fallen off a pandemic cliff have ticked up slightly. These are welcome sights for the city's tourism industry, which was decimated by COVID-19. (By The Associated Press)

NEW YORK (AP) - The once-deserted steps outside the Metropolitan Museum of Art are filling up with visitors again. Hotel lobbies are losing their desolate feel. Downtown, people are back to taking selfies with the Charging Bull statue near Wall Street.

Tourists who vanished from New York City's museums, hotels and cultural attractions when the coronavirus pandemic hit a year ago are trickling back in as restrictions loosen.

There's still a long way to go before the still-closed theater district is mobbed with international travelers again.

But lately, indicators like hotel occupancy and museum attendance have ticked up, thanks to domestic travelers and day-trippers who don't mind seeing the city operating at less than its usual hectic pace.

"I've always wanted to come to New York, just because I've watched the movies," said Chazmin Fuhrer, 26, a first-time visitor from Concord, California, who came into the city for a handful of days recently to celebrate a friend's birthday.

Whale-watching tours from Manhattan coming in May 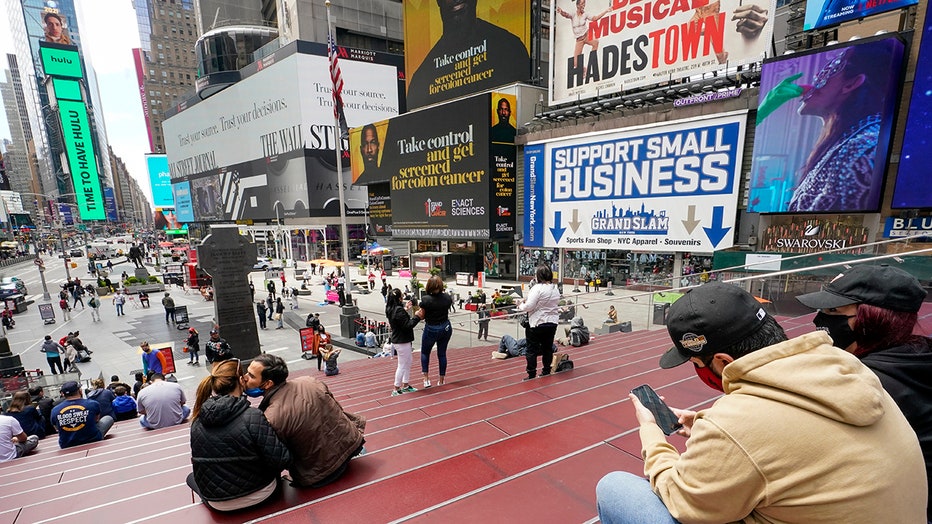 Lounging at a table in Times Square as three street performers started their dance moves nearby, Fuhrer said she knew it wasn't anywhere near as busy as usual. But she was OK with that.

"It's kind of nice without a lot of people out," she said, noting that the pre-pandemic crush of people would probably now make her nervous, with the virus still circulating.

City officials are optimistic, even in the wake of an incident in Times Square on Saturday, when three people — including a child — were injured by stray bullets when a dispute led to gunfire.

"In the end, people want to come to this city," Mayor Bill de Blasio said Monday. "It is an overwhelmingly safe city, when you look at New York City compared to cities around the country, around the world."

The mayor, the police commissioner, and some candidates for mayor all addressed the concerns about a spike in shootings and other violent crimes.

Experts: Book early if you want to travel this summer

In 2019, an estimated 67 million people visited the city. In 2020, that plummeted to slightly more than 22 million, mostly those who came before the pandemic began rampaging in New York in March.

Restaurants and stores were forced to close, as were some hotels, bringing the city's available rooms from 124,000 to 88,000, according to city tourism officials.

On top of that, unrest over racial injustice in late spring led to two days of property destruction and stealing.  While the damage was limited and cleanup quick, the city suffered through months of bad press as then-President Donald Trump, eager to bash his Democrat-run hometown, publicly smeared it as having succumbed to anarchy.

The daytime Times Square shooting brought a fresh round of handwringing.

But after a moribund year, things are looking up. The Metropolitan Museum of Art, for example, has reached 9,000 visitors on some recent days. That's still far less than the swarms of 25,000 who once packed in on the busiest days pre-pandemic, but far more than the museum was seeing when it reopened in late August. 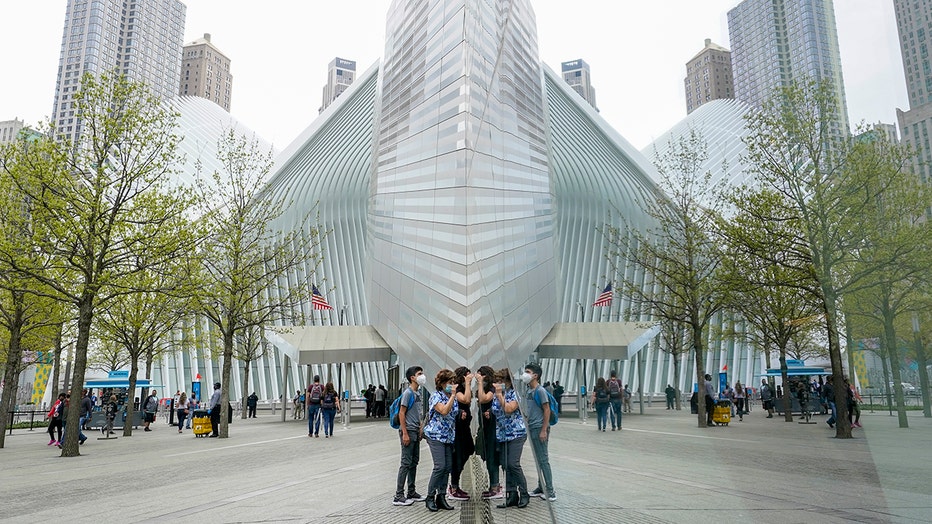 Ridership is up on the ferries that take visitors from the southern tip of Manhattan to the Statue of Liberty, where the grounds and a museum are open even as the statue's interior remains off-limits.

Rafael Abreu, vice president for marketing at Statue Cruises, said it had been "fairly slow" through February, but ridership had risen in March and April to about 25-30% of pre-pandemic times.

Hotel occupancy, which had been running in the 30% range, has been in the 50% range over the last few weeks, said Fred Dixon, president and CEO of NYC & Company, the city's tourism agency. 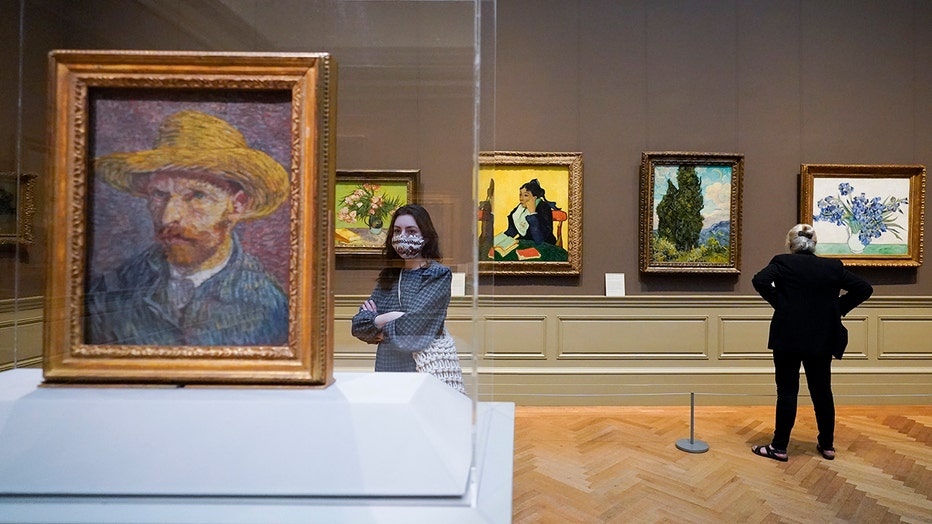 Visitors to the Metropolitan Museum of Art inspect Van Gogh paintings, Thursday, April 29, 2021, in New York. In recent weeks, tourism indicators for New York City like hotel occupancy and museum attendance that had fallen off a pandemic cliff have t

New hotels are opening, and the number of rooms is expected to reach 118,000 by year's end.

"It's just really wonderful," Dixon said of the city's cautious reawakening. "And so, it's given us a lot of hope."

The agency is predicting just over 31 million visitors in 2021.

City and state officials in recent weeks have been making moves to open the city up as much as possible.

New York Gov. Andrew Cuomo announced the city's subway system would return to 24-hour service in mid-May. Capacity restrictions on businesses are being lifted, although 6 feet (2 meters) of space between patrons will still be required.

The Yankees and Mets have been allowed to boost crowd capacity at games, with no restrictions at all on people who can show they have been vaccinated.

The city and state are also setting up vaccination stations offering free shots to tourists. 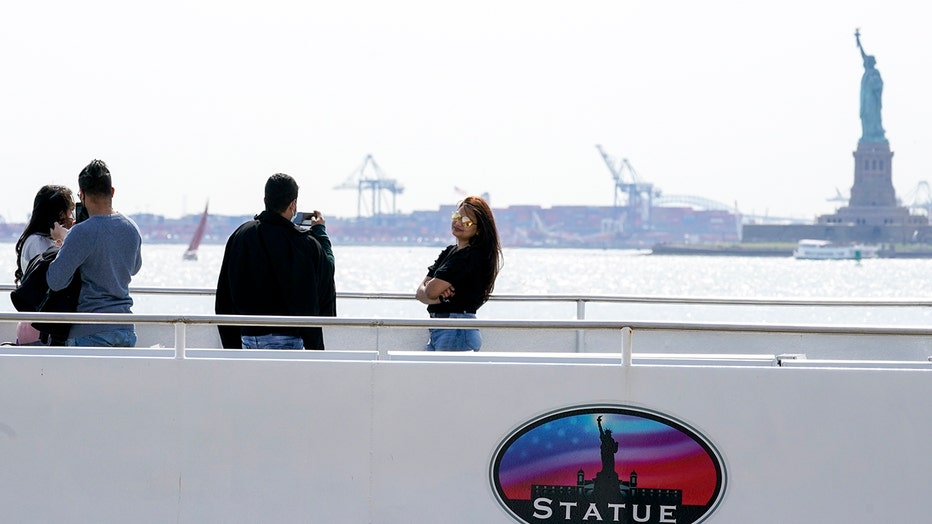 "We think this is a positive message to tourists. Come here. It's safe. It's a great place to be and we're going to take care of you," said de Blasio, a Democrat.

In a city where multitudes are dependent on tourism for their livelihoods, things can't get better quickly enough.

Michael Keane, an owner of O'Hara's Restaurant and Pub near the World Trade Center site, said things have been looking up.

"It's been a slow crawl but we're seeing more and more tourists every week come in the area," he said, noting that he's keeping a nervous eye on how the virus has continued to ravage some other countries. "I can't imagine going through that again."

But even with things moving slower, Fuhrer said she was "definitely not disappointed" with her trip. 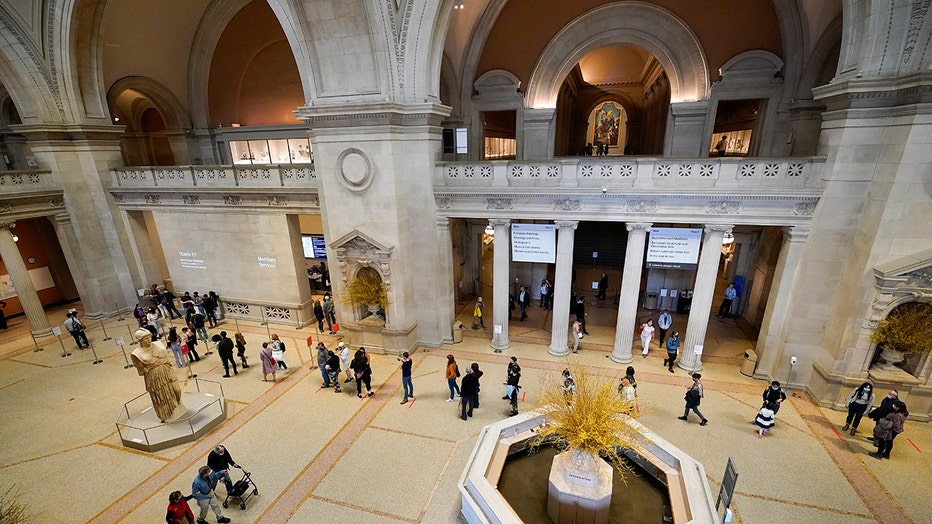 Visitors to the Metropolitan Museum of Art stand in line to purchase tickets, Thursday, April 29, 2021, in New York. It's a welcome sight for a city where the industry has been decimated by the impact of the coronavirus. (AP Photo/Mary Altaffer)

Back home, "I feel like people are still a little bit cautious out there with COVID," she said. Meanwhile, in New York, "I feel like everybody out here is trying to get their life going."

She and girlfriend Gabbi Allen, 23, both vaccinated, felt like they got to experience some of that New York vibe.

"All the sirens, all the honking," Allen said.

"People yelling at each other in the middle of the street," Fuhrer added.

The lower-key New York City has actually been wonderful, said Stephanie Piefke, 24, of Atlanta, a frequent visitor out recently for some touristy activities with her friend, first-time visitor Danielle Jenkins.

The women, both vaccinated, said at the Empire State Building there were maybe a few dozen people cruising through a waiting area set up to handle what Piefke said would have been a "miserable" snaking line.

She didn't think the quieter New York City would last, though, once the city fully reopens.

"Y'all are gonna be like, 'Oh God, they're here,'" she said, "and it'll be like a tsunami of tourists that have been wanting to come."