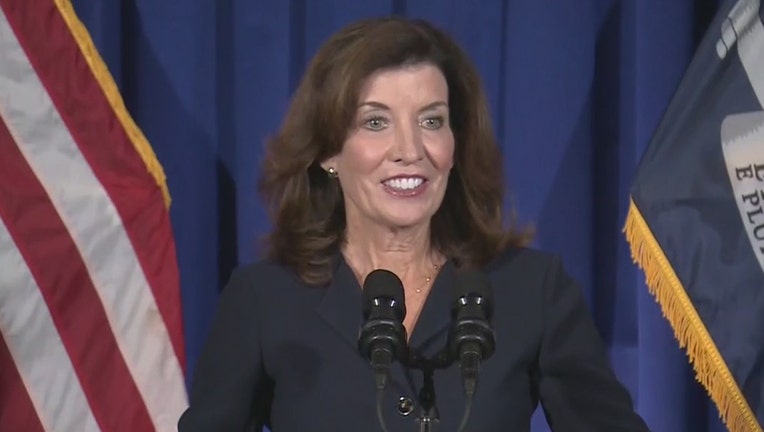 Details of how the power transfer will take place weren't immediately available.

It's likely Hochul, the lieutenant governor, will address the public sometime Tuesday for the first time as the state's new governor.

Cuomo had announced on Aug. 10 that he would resign from office in 14 days but didn't specify exactly when he would step down.

Cuomo is quitting amid a collapse of support from even his most loyal political allies following the release of a report overseen by State Attorney General Letitia James that found the governor had sexually harassed at least 11 women.

The governor denied that he touched anyone inappropriately and said some of his comments to women had been misunderstood but said he believed it would hurt the state if he continued to fight to stay in office.

Cuomo filed retirement papers Tuesday, with his retirement effective Sept. 1. It's unclear how much his pension will be — he has 14.56 years of service credit, according to the state Comptroller's office.

RELATED: Hochul says becoming governor 'not expected' but is 'prepared'

A strong majority in the state Assembly had said they would impeach Cuomo if he didn't step down.

Assembly Speaker Carl Heastie said last week that he was dropping the impeachment drive, but on Monday, facing a bipartisan backlash, he said the body's Judiciary Committee would still finish its investigation into Cuomo's conduct and issue a public report.

It's unclear when that report will come out.

In addition to investigating the harassment allegations, lawyers hired by the Assembly have been looking into the Cuomo administration's handling of COVID-19 outbreaks at nursing homes and his use of state resources for his $5 million pandemic book deal.

Evidence gathered during the investigation is being made available to committee members but under tight security.

Assemblymember Marjorie Byrnes, a Republican on the committee, said Tuesday that she and other committee members are poring over the documents "in a room that is being guarded by the sergeant of arms."

RELATED: Who is Kathy Hochul, New York's next governor?

"If this material is never released to the public, then the people of this state and in my district are never going to know the truth," she said.

Hochul, a Democrat, spent Tuesday taking meetings in New York City to narrow down her selection for her successor as lieutenant governor.

She has vowed to depart from the Cuomo administration's reputation as a "toxic" work environment and focus on addressing the COVID-19 pandemic and concerns over NY's eviction protection for renters.