Some civil rights groups are condemning the mayor's controversial plan to force homeless people who are determined to be suffering a "mental health crisis" off the streets and out of the subway system.

NEW YORK - New York City Mayor Eric Adams said the NYPD, FDNY, and other city agencies will start forcing homeless people who are determined to be suffering a "mental health crisis" off the streets and out of the subway system. They will be taken to a hospital for evaluation even if they refuse to go on their own.

"You all know it — you're watching people standing there on the street talking to themselves, don't have shoes on, shadow boxing, unkempt," Adams said on Tuesday.

However, some civil rights groups are condemning the controversial plan.

"It is not in the least bit a solution," New York Civil Liberties Union Executive Director Donna Lieberman said.

A real solution, she said, would be providing housing and long-term treatment for the mentally ill.

"Why doesn't [Adams] spend those resources converting some of the empty commercial real estate in Manhattan, for example, into housing," Lieberman added, "with programs to support people who have serious medical conditions?"

The Legal Aid Society said the mayor's approach is wrong because forcing someone who is mentally ill most often leads to their arrest — not a hospital bed with treatment.

The mayor countered the criticism.

"I know some people may look at what we're doing and say we are trying to do something to take away the right of people — no we're not," Adams said. "The right is that people should be able to live in dignity. There's nothing dignified about living a month without having a shower."

Some civil rights groups are also pointing the finger at Albany. They say state lawmakers need to pass laws that would offer mentally ill people treatment instead of jail and give judges the discretion to send them for treatment.

We can’t just stabilize people for a few days and send them back out into the city.

"It is appropriate to use this process when a person refuses voluntary assistance and it appears that they are suffering from mental illness and are a danger to themselves due to an inability to meet their basic needs," Adams said. "We believe this is the first time that a mayoral administration has given this direction on the 'basic needs' standard in official guidance."

The administration admits that the city is facing a crisis with people experiencing severe mental illnesses on the streets and in the subways. The mayor said clinical co-response teams will be deployed in New York City's subways to respond to those with serious mental health issues.

Adams said state law gives first responders the legal authority to provide care to New Yorkers when severe mental illness prevents them from meeting their own basic human needs and involuntary intervention does not require an "overt act" demonstrating that the person is "violent, suicidal, or engaging in outrageously dangerous behavior likely to result in imminent harm."

But the city is not setting a clear standard on how to determine if a person is unable to take care of themselves. City officials say this will be determined on a case-by-case basis. 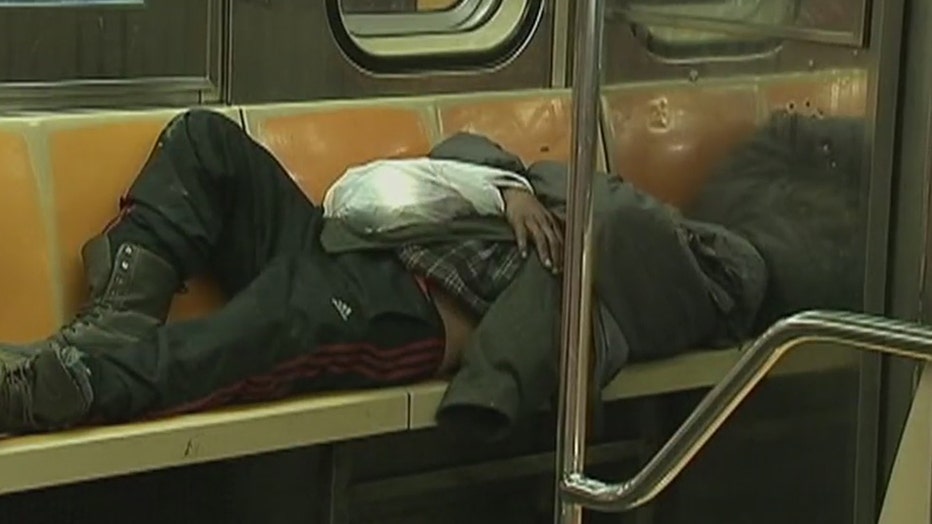 Adams said the city will also seek changes in the law to improve communication between inpatient and outpatient treatment providers, allowing better continuity of care and discharge planning.

"We can't just stabilize people for a few days and send them back out into the city. We must build a continuum of care that helps patients transition into step-down programs and eventually into supportive housing," Adams said at an event launching the changes.

Often when a homeless individual is experiencing a mental health crisis, they are committed to a hospital but then discharged a few days later. This new plan would direct a hospital to keep the patient until they are stable and then connect them with ongoing care. However, the city needs more beds, the mayor said.

New York City continued its plan to get homeless people off the streets and into shelters. However, advocates for the homeless say the city's tactics and solutions are wrong.

"There's no getting around that we need beds," Adams said.

The homeless population typically increases on subways in the winter months due to the cold weather but there has been an ongoing issue with a large population of homeless people, some with mental illness, in subway stations and on trains.

There have been several high-profile violent crimes this year involving homeless people in the subways.

"You can't effectively have public safety without adequate mental health care — the two go hand-in-hand," Deputy Mayor for Public Safety Philip Banks III said. "For too long, public safety personnel's hands have been tied in getting those in need care before they hurt themselves or others. These directives and proposals are a common-sense way to clear those impediments and get help for those who need it most."