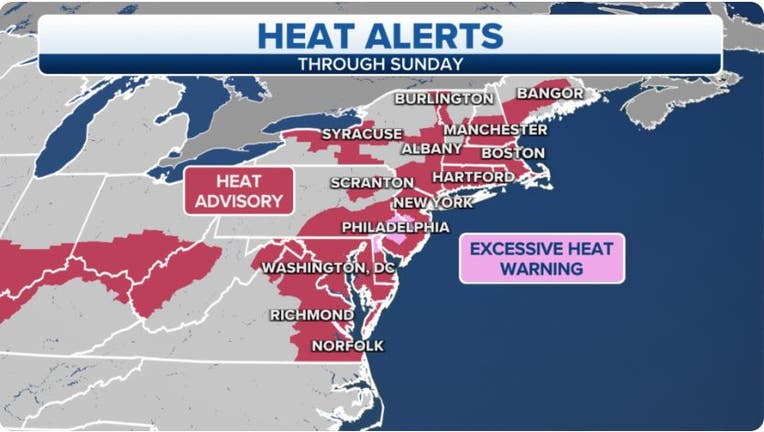 The New York City Medical Examiner said that the victim also suffered from heart disease and pulmonary emphysema, according to the New York Post.

Temperatures are expected to hit a sizzling high of 97 degrees on Sunday, with heat index values surging over 100 degrees, but the heat wave is expected to mercifully come to an end early in the week.

The 2022 New York City Triathlon ran on Sunday but organizers decided to shorten parts of the event because of the dangerous heat as well. 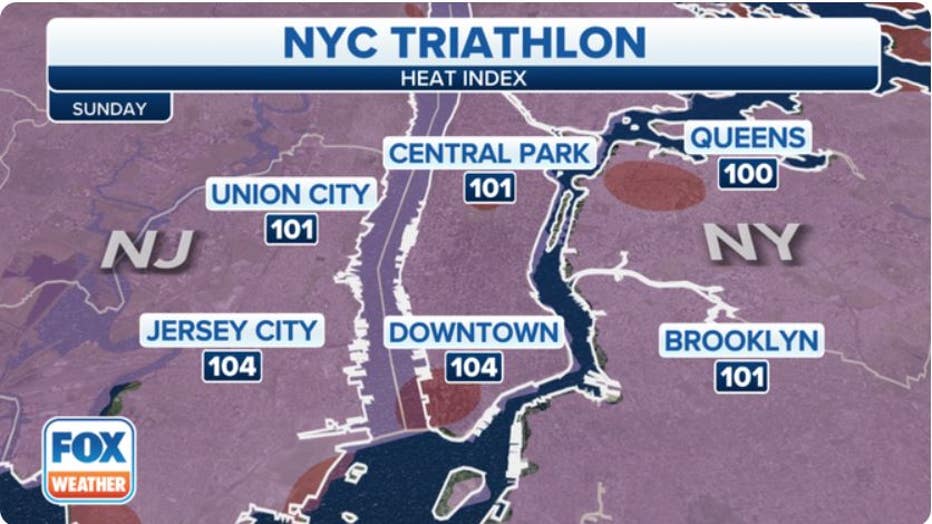 The heat index will be over 100 for the New York City Triathlon on Sunday, July 24. (FOX Weather)

The heat is expected to finally end by Tuesday when highs will finally ball back to the 80s.

Officials are urging people to seek shelter, as well as to drink lots of water, and be good Samaritans by checking on elderly neighbors for signs of distress.

"While we welcome the warm summer days, New York City is expecting dangerous heat and high humidity this week, and we encourage New Yorkers to take the necessary precautions to avoid exposure to the extreme conditions," Emergency Management Commissioner Zach Iscol said in a statement.

Con Edison is also urging New Yorkers to do their part to keep pressure off of the power system over the next few days of extreme heat by not running their air conditioning on full blast.

Officials suggest running dishwashers or washers and dryers early in the morning or late at night, and that crews are making sure that if you do temporarily lose power, that you get it back as soon as possible.

As a major heat wave settles over New York City and much of the eastern United States, the office of Mayor Eric Adams is teaming up with Con Edison to incentivize big city buildings to use less electricity and asking New Yorkers to cut back on AC use to prevent power outages.

New York City cooling centers have been opened throughout the heat wave. Cooling centers are air-conditioned facilities—such as libraries, community centers, and senior centers—that are open to the public during heat emergencies. Note that the cooling centers located at older adult center sites are reserved for New Yorkers 60 and older.

Some locations of cooling centers have changed since 2021, officials said, so make sure to either check NYC.gov/beattheheat or call 311 to find one near you.

Do not underestimate the potential danger of heat, which is the top weather-related killer in the United States, according to the New York State Health Department.

"Heat-related deaths and illness are preventable, yet annually many people suffer from the effects of extreme heat. Some individuals are at a higher risk for heat-related illness than others," the governor's office said in a release. "New Yorkers should learn the risk factors and symptoms of heat-related illness to protect themselves and those they love."

This summer is shaping up to be one of the hottest on record — not just in the United States but across Europe and other parts of the globe.

Symptoms of heat stroke include hot, dry, and red skin; a rapid pulse; rapid and shallow breathing; body temperature higher than 105 degrees; and loss of alertness, confusion, and/or loss of consciousness.

"The effects of high heat and humidity over the course of a few days create dangerous conditions that can lead to heat stress and illness," state Emergency Services Commissioner Jackie Bray said. "New Yorkers should do their best to stay indoors and stay hydrated by drinking lots of water. If you choose to exercise or have to work outside, try to do so in the early morning or evening hours when the sun is down, and temperatures are not as extreme."