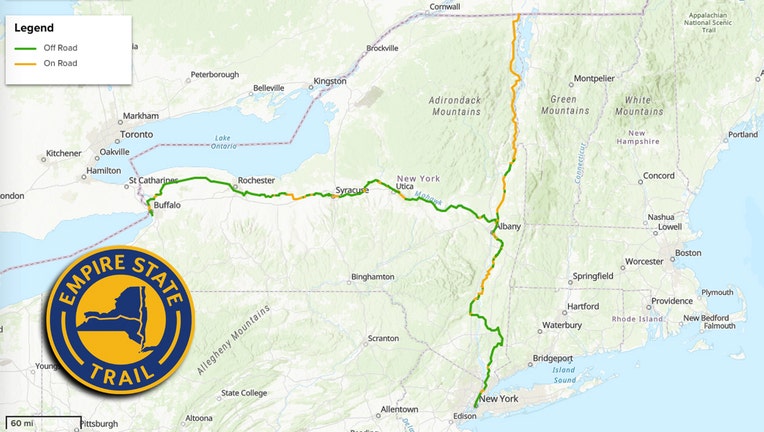 A map of the Empire State Trail in New York. (Screenshot via empiretrail.ny.gov/ESRI) | Click here for the interactive map

NEW YORK - New York state has finished work on a 750-mile trail for cyclists, hikers, and runners that spans the state from New York City to Canada, and from Albany to Buffalo.

The EST's north–south branch runs from Battery Park in Manhattan through the Hudson Valley and Champlain Valley to the Canadian border just north of Rouses Point. The east–west branch of the trail breaks off in Cohoes, follows the Mohawk River and then the Erie Canal, and leads to Buffalo Harbor State Park on the shore of Lake Erie.

"There's no trail like it in the nation," Cuomo said in a news release. "Not only does it provide an opportunity to experience the natural beauty and history of New York, but it also gives New Yorkers from every corner of the state a safe outlet for recreation as we continue to grapple with the COVID-19 pandemic."

Users of the trail can peruse the Empire State Trail website for interactive maps, segment descriptions, access points, trail distances, parking areas, restrooms, amenities, and attractions along and near the trail. 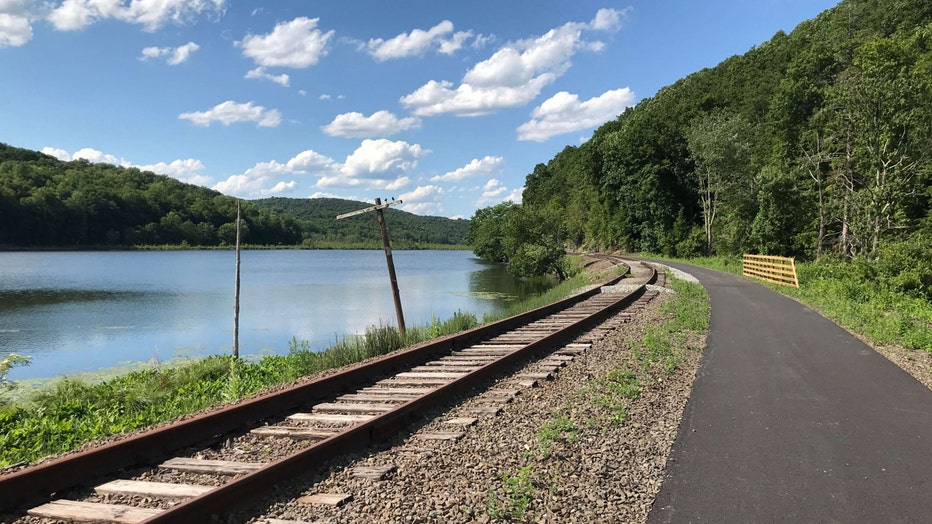 A section of the Maybrook Trailway, which is part of the Empire State Trail, next to Ice Pond in Putnam County, N.Y. (Photo via empiretrail.ny.gov)

These are summaries of the major projects for the trail, as provided by the office of the governor:

Albany-Hudson Electric Trail: The Hudson River Valley Greenway constructed 36 miles of off-road and on road trails from the city of Rensselaer to the City of Hudson in Rensselaer and Columbia counties. The $45 million trail follows the historic route of an electric trolley which operated from 1900 to 1929. The corridor is owned by National Grid, which authorized New York State to build a trail on the route.

Maybrook Trailway: Metro-North Railroad constructed a new 23-mile rail-trail on its inactive "Beacon Line" corridor from Hopewell Junction in Dutchess County to Brewster in Putnam County passing through the towns of Pawling, Southeast, Paterson, Beekman and East Fishkill. Along the route, the trail winds through rural landscapes and wooded areas featuring seasonal waterfalls and crosses the Appalachian Trail. The $42 million Beacon Line was the first all-rail freight connection across the Hudson River north of New York City. It originally opened as a rail line in 1892 and served as a vital transportation link between New York and southern New England, carrying trains between Derby Junction and Maybrook, via the bridge over the Hudson River at Poughkeepsie that is now the Walkway Over the Hudson.

Battery Park City Gateway: The $450,000 gateway marks the southern terminus of the trail in Lower Manhattan.

Macedon Bridge: NYSDOT restored a closed vehicle bridge over the Erie Canal. The $4.2 million investment created a bicycling and walking trail and created a local park.

Erie Blvd-Syracuse: NYSDOT constructed a 3-mile trail in the median of Erie Blvd, from East Syracuse to DeWitt. The project cost $23 million.

Loop the Lake Trail-Syracuse: Onondaga County constructed a new 1.5-mile trail on the south shore of Onondaga Lake, including a new bicycle/pedestrian bridge over CSX's rail line. The project was funded with County and federal funds.