NEW YORK - Supporters of Manhattan congestion pricing have been fighting for it going back to the Bloomberg administration. However, as it comes closer to becoming a reality, voices opposing it are growing louder.

Motorists entering the heart of Manhattan would pay an extra $9 to $23 under the long-delayed congestion-pricing plan, which may finally take effect by the end of 2023, according to an environmental assessment released by the Metropolitan Transportation Authority in August.

The MTA, which would implement the electronic tolling system, stands to raise about $1 billion a year to help fund improvements to mass transit. Authorities also expect the tolls to dissuade people from driving into Manhattan, reducing traffic and thus noise and pollution.

The zone for the congestion-pricing plan, which the MTA formally calls the Central Business District Tolling Program, includes all of Manhattan south of 60th Street except for the West Side Highway (9A), the FDR Drive, the Battery Park Underpass (which connects the two), and any roadway that connects the Hugh L. Carey Tunnel to West Street. 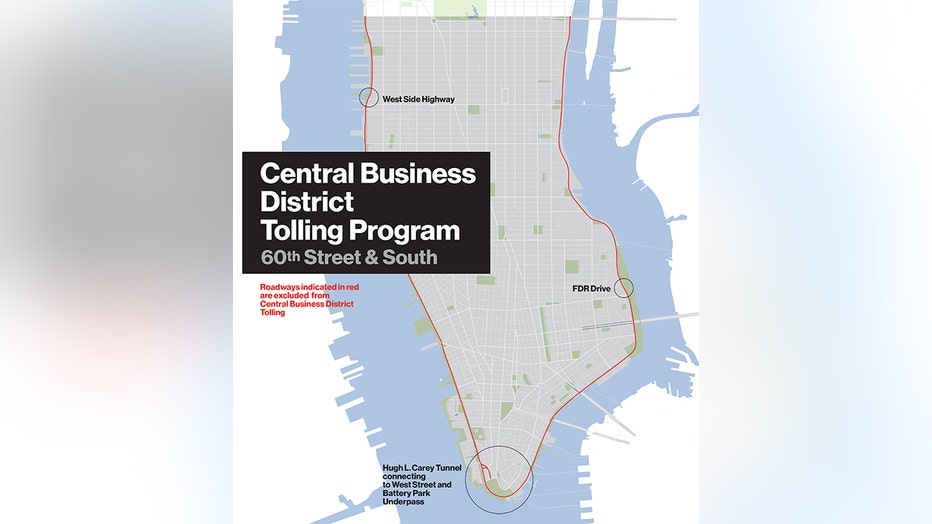 A six-person board will finalize the rate structure, which is expected to have a number of discounts and exemptions. For example, Manhattan residents who live in the zone and make less than $60,000 per year would be eligible for a tax credit to cover the cost of tolls.

The MTA is exploring seven versions of the tolling plan with varying rates depending on a few factors —such as which discounts are given to drivers already paying tolls at bridges and tunnels entering Manhattan and whether there is a cap on the number of times a car or truck can be tolled in one day.

In one scenario, vehicles that enter the toll zone would pay $9; another scenario has all drivers paying $23. 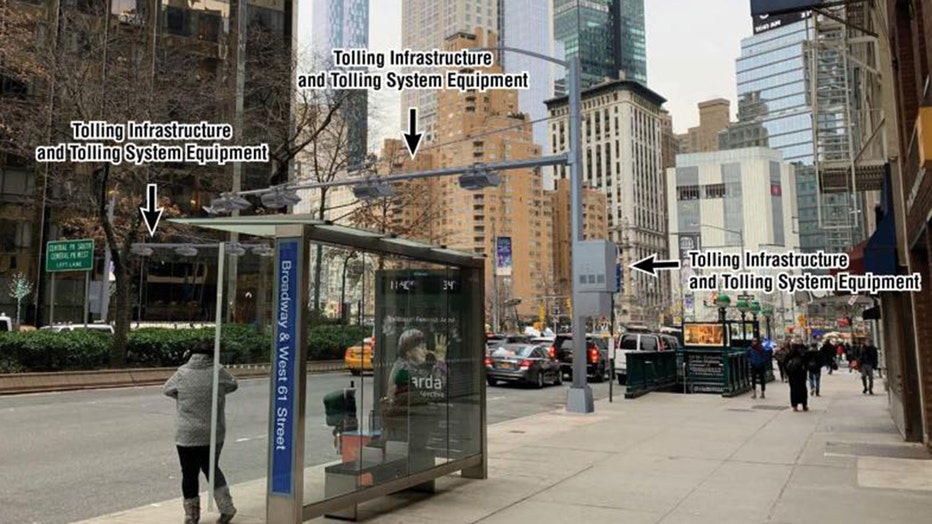 This rendering shows a proposed mast arm holding tolling infrastructure and tolling system equipment over the road at Broadway near 61st Street. (Courtesy of MTA)

For example, tolls would peak at $23 under a scenario in which cars, trucks, taxis, and for-hire vehicles would be capped at one toll per day and drivers already paying tolls at seven bridges and tunnels into Manhattan would receive credits.

Conversely, tolls would top out at $9 in a scenario in which taxis, for-hire vehicles, and trucks would have no cap on how often they could be charged and drivers at the seven crossings wouldn't receive credits.

Only one of the seven scenarios includes a credit for drivers crossing the George Washington Bridge from New Jersey into Upper Manhattan.

The MTA is holding a series of public hearings about its planned Manhattan congestion toll program.

The long-delayed environmental impact report said congestion tolling could result in more traffic on the Cross-Bronx Expressway and the RFK Bridge. City Council Member Joseph Borelli, a Republican, said that would futher harm areas already dealing with some of the highest asthma rates in the country.

"Imagine our government, our progressive government, implementing the most regressive tax we've ever done, with no oversight," Borelli said, "one we admit would disproportionately impact low income people."

A number of lawmakers and public officials in New Jersey have slammed the tolling plan, calling it a "tax" on New Jersey residents who commute to New York and already pay high tolls at the crossings. On Tuesday, U.S. Rep. Josh Gottheimer and state lawmakers introduced a bill to incentivize businesses in New York to open new offices in New Jersey for employees who live in the Garden State.

The MTA released more information about its Manhattan congestion tolling plan, including the possible fare structure depending on various scenarios.

"This assessment makes clear the widespread benefits that would result from Central Business District tolling," MTA CEO Janno Lieber said in a statement. "Bottom line congestion pricing is good for the environment, good for public transit and good for New York and the region. We look forward to receiving public feedback in the weeks ahead."

Public Comment Period: How to Submit Your Feedback on Congestion Pricing

The MTA held six public hearings in August allowing people to comment. [You can view recordings of those hearings here.]

If you would like to weigh in before the Sept. 23 deadline, you can do so online or by email, mail, phone, and fax. Here are contact details:

New Jersey continues to push back against the forthcoming Manhattan congestion pricing tolls. Some New Jersey lawmakers are proposing legislation that would incentives to businesses that reduce the commute time for employees from New Jersey.