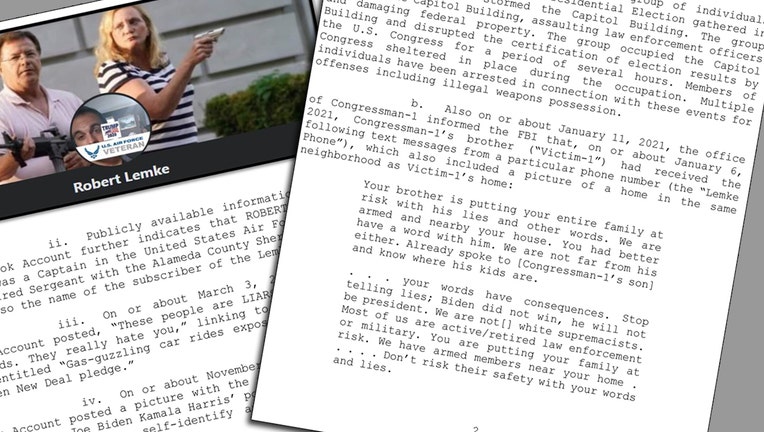 NEW YORK (AP) - A California man disgruntled about the presidential election result was arrested Tuesday on charges alleging he threatened family members of a New York City-based congressman and a journalist in text messages sent during the attack on the Capitol, authorities said.

Robert Lemke, 35, was arrested in Bay Point, California, on charges filed in Manhattan federal court. He was scheduled to make an initial appearance in federal court in Northern California on Wednesday.

A criminal complaint charging him with threatening interstate communications said he identifies himself on Facebook as a former captain in the U.S. Air Force and a retired sergeant with the Alameda County Sheriff's Office in California.

It was not immediately clear who would represent him in court.

The identities of the member of Congress and the journalist were not revealed in court papers.

Manhattan U.S. Attorney Audrey Strauss said in a release that Lemke was dissatisfied with the 2020 presidential election results and statements the U.S. representative and journalist had made about it.

"Rather than peaceably disagree, Lemke allegedly threatened to harm those individuals' families, demanding they retract their statements," she said. "While in any election it is inevitable that some will be disappointed in the result, threats of violence cannot and will not be tolerated."

According to the criminal complaint, Lemke on Jan. 6 sent text messages to the brother of a New York City congressman that included a picture of a home located in the brother's neighborhood.

"Your brother is putting your entire family at risk with his lies and other words. We are armed and nearby your house. You had better have a word with him," one text said. "We are not far from his either. Already spoke to (the Congressman's son) and know where his kids are."

The complaint said the text messages included claims that the sender and his associates were not white supremacists and were "active/retired law enforcement or military."

"Stop telling lies; Biden did not win, he will not be president," the texts said.

Authorities also said that Lemke on Jan. 6 sent threatening text messages to the congressman's sister-in-law, telling her to have her husband talk to his brother and stating: "calm your husband down . . . . We saw on the hidden camera, he was quite stirred up."

The complaint alleged that a Jan. 6 text message from Lemke's phone to a relative of the journalist said the journalist's words "are putting you and your family at risk."

The text added: "We are nearby armed and ready. Thousands of us are active/retired law enforcement, military, etc. That's how we do it," the complaint said.

The complaint also said Lemke's apparent Facebook page contained the following message on Nov. 7: "Folks. Be ready for war. Trump has refused to cede. Evidence shows fraud occurred and the Supreme Court cases will be successful. We blockchained and watermarked ballots in 16 states. Trump will prevail."