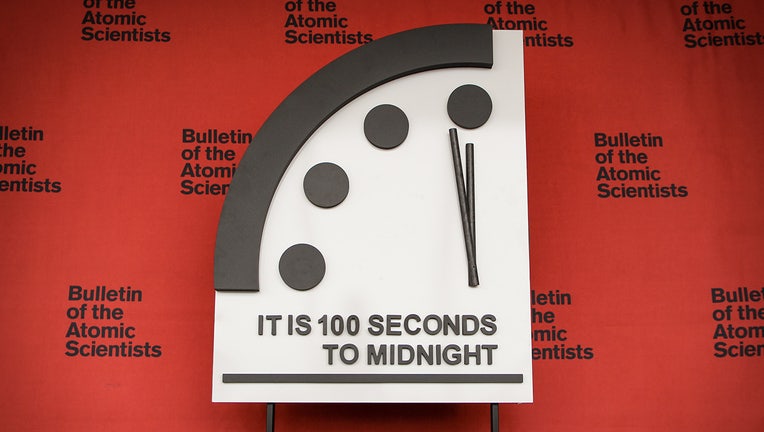 The Doomsday Clock is a metaphorical clock that illustrates how close we are to destroying ourselves. It has been at its closest time to midnight for the past two years.

The Bulletin of the Atomic Scientists created the clock in 1947. It has come to be viewed as "an international symbol of the world's vulnerability to catastrophe from nuclear weapons, climate change and disruptive technologies," the group says. The Bulletin was founded by Albert Einstein, J. Robert Oppenheimer, Eugene Rabinowitch, and other Manhattan Project scientists who helped develop humanity's first atomic weapons — so they certainly knew something about self-destruction.

The group said the time of 100 seconds to midnight is based on "continuing and dangerous threats posed by nuclear weapons, climate change, disruptive technologies, and COVID-19," which are exacerbated by the "corrupted information ecosphere that undermines rational decision making."

The decision to keep the clock at 100 minutes to midnight, where it was set in January 2020, shouldn't imply that the world's situation "has stabilized," the Bulletin said.

"On the contrary, the Clock remains the closest it has ever been to civilization-ending apocalypse because the world remains stuck in an extremely dangerous moment," the group said.

The group outlined several steps that world powers need to take to pull back the hands of the clock. These include implementing "ambitious and comprehensive limits" on nuclear weapons, accelerating the reduction of carbon emissions, working through the World Health Organization to reduce biological risks, and much, much more.

"The Doomsday Clock continues to hover dangerously, reminding us about how much work is needed to be done to ensure a safer and healthier planet," Bulletin of the Atomic Scientists CEO Rachel Bronson said. "We must continue to push the hands of the Clock away from midnight."