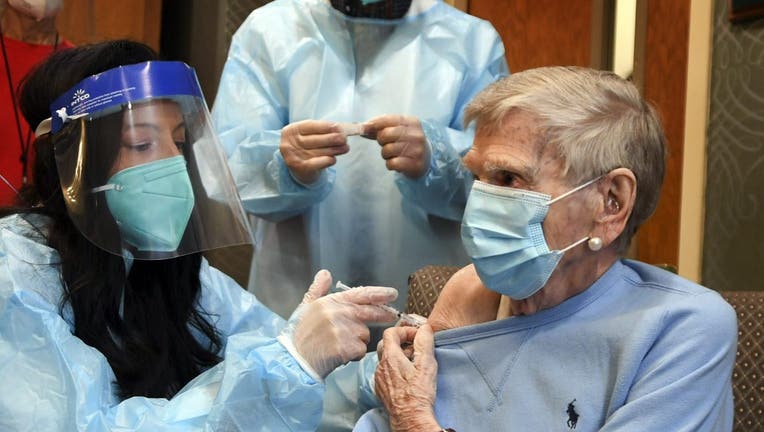 CONNECTICUT - Gov. Ned Lamont said staff and residents at all of Connecticut’s nursing homes are on track to have their first dose of the COVID-19 vaccine by Friday, but he acknowledged some workers have been reluctant to get the shot.

The state plans to begin airing a public service announcement on Tuesday, hoping to encourage more workers to get vaccinated.

"I am told that the overwhelming (number) of the (nursing home) residents are eager to get the vaccine and are getting vaccinated," Lamont said. "I understand there's a little more hesitancy when it comes to some of the nurses. Most are getting it, but not all. So we’re doing a pretty aggressive public outreach campaign to address them."

Lamont said as of Monday, more than 75,000 of the 167,00 doses Connecticut has received so far have been administered. He said some "first tier responders" were getting their second doses on Monday, while residents and staff at some assisting living facilities were getting their first ones. He said Connecticut is among the first eight states that have administered the vaccine to more than 2% of the population.

Eighty-five sites across the state are now administering vaccine doses, including hospitals and nursing homes, with plans to roll out to pharmacies over the next couple weeks.

"So as we broaden our population, it’ll be easier for people to get their vaccine on a retail basis right at their local pharmacy, Walgreens, CVS, you name it ... federally qualified health centers," he said.

To prevent vaccine from "just sitting on a shelf and not being used," an issue that has cropped up in other states, Lamont said the state has developed a "just-in-time inventory" system where unused doses of vaccine are transferred to other facilities at the end of the day.

Lamont said as Connecticut receives more vaccine from the federal government, state officials will "open up the lens a little bit more, either in terms of age groups, demographics or other front line responders to make sure that every drop of that vaccine is administered on a timely basis."

The rollout of the coronavirus vaccine is underway, but many are not sure where and when to get the shot.

Lamont's vaccine distribution advisory committee is scheduled to meet Tuesday. They're expected to discuss who will be part of the Phase 1B distribution.

Since Saturday, there have been more than 4,500 new probable or confirmed COVID-19 cases in Connecticut; 55 more hospitalizations, for a total of 1,111; and 69 more COVID-associated deaths, for a total of 6,168.