MANAGUA, Nicaragua (AP) - Hurricane Eta erupted quickly into a potentially catastrophic major hurricane Monday as it headed for Central America, where forecasters warned of massive flooding and landslides across a vulnerable region.

Eta had maximum sustained winds of 130 mph (215 kph) and was centered about 70 miles (110 kilometers) east of the Nicaragua-Honduras border in late afternoon, the U.S. National Hurricane Center said. It was moving west at 9 mph (15 kph).

It said the Category 4 hurricane was likely to strengthen further before running ashore by early Tuesday in Nicaragua, where it could bring rains measured in feet rather than inches.

Forecasters said central and northern Nicaragua into much of Honduras could get 15 to 25 inches (380 to 635 millimeters) of rain, with 35 inches (890 millimeters) in isolated areas. Heavy rains also were likely in eastern Guatemala, southern Belize and Jamaica.

Storm surge up to 15 feet (4.5 meters) above normal tides was possible for the coast of Nicaragua.

Nicaragua's navy carried families in open boats, mostly women and children with the possessions they could carry from outer islands to the mainland under a low grey sky. It prohibited the launching any boats along the stretch of coastline expected to receive Eta.

Offshore residents were taken to shelters in Bilwi, also known as Puerto Cabezas, the primary city of the Northern Caribbean Autonomous Region that is home to some 66,000 people, according to Guillermo González, director of the Nicaragua’s national emergency management agency.

González said that 88 tons of rice, oil, corn and other food basics had been to the area. The flood-prone Rio Coco, which makes up part of the border with Honduras, is home to many Indigenous communities.

Traffic filled the streets of Bilwi on Monday morning as residents scrambled to stock up before Eta’s arrival. Long lines snaked away from cash machines.

RElATED: Zeta’s toll on a Louisiana island: ‘Like a bomb was dropped’

“We’re in a race against time,” said Limborth Bucardo, who waited in line at a hardware store. “We need to reinforce our houses to dampen the impact of the winds a little.” Heavy black plastic, garbage bags, nails and rope were in high demand.

The outer bounds of forecast potential rainfall from Eta were close to the prodigious amounts of water dumped by 1998's Hurricane Mitch, one of the deadliest Atlantic storms in history.

A National Hurricane Center archive report says more than 9,000 people died as Mitch's rains caused widespread flooding during a weeklong slog across the region. At one point its winds reached nearly 180 mph (285 kph), though it weakened while meandering off the Honduran coast before making landfall on Oct 29, 1998.

In Honduras, much of the country was placed on red alert for Eta’s eventual passage through the country. It had been raining since Sunday in some areas.

Julissa Mercado, spokeswoman for the national emergency management agency, said firefighters had started evacuating areas most at risk and mandatory evacuations would be ordered soon. 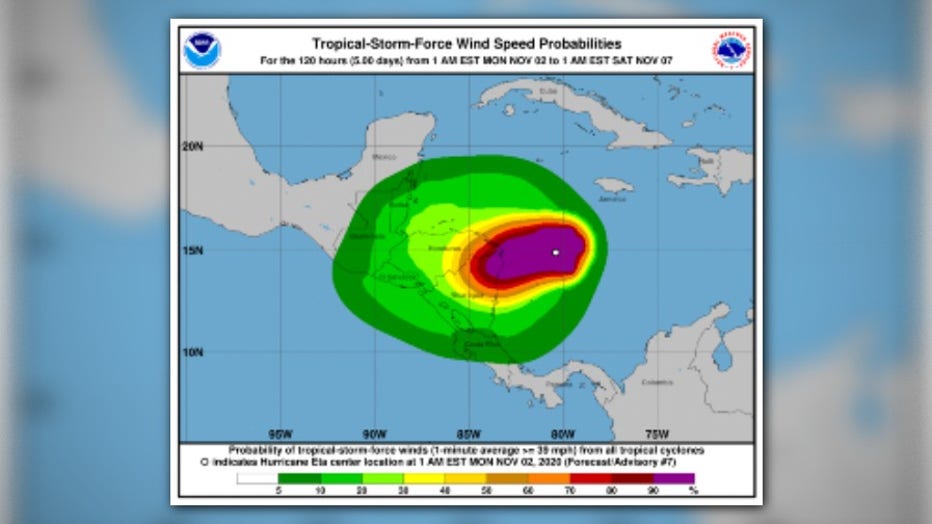 Eta has been upgraded to a hurricane and threatens to bring heavy rain, storm surge, landslides and more to parts of Central America and the Caribbean. (Source: National Hurricane Center)

Eta will arrive in Honduras just as the country prepares to go on vacation in an effort to bolster the tourism sector and pump some money into the pandemic-battered economy. The extra-long weekend begins Wednesday and carries through Sunday, but cancellations were already occurring.

In the city of Tela, on Honduras’ Caribbean coast, heavy rains had already sent two rivers spilling over their banks. Rescuers moved people from riverside communities to six shelters in the city, said Capt. David Velásquez of the city’s fire department. Some 20 people whose homes flooded were moved to a sports complex in the city. Each evacuee was subjected to a rapid coronavirus test.

The Guaymón river between Tela and El Progreso also threatened to top its banks as people living nearby filled sandbags hoping to protect their communities. The Honduran air force began flying supplies to areas expected to be hardest hit by the storm.

Eta tripled in strength in about 24 hours, rapidly intensifying from a 40 mph (65 kph) storm Sunday morning to a 120 mph (190 kph) hurricane around midday Monday, and forecasters said it could grow further, into a Category 4 storm before hitting land.

Eta is the eighth Atlantic storm this season to hit the meteorologists’ definition for rapid intensification — a gain of 35 mph (56 kph) in wind speed in just 24 hours. It's also the fifth to reach major hurricane status.

Over the past couple decades, meteorologists have been increasingly worried about storms that just blow up in strength, like Eta.

National Oceanic and Atmospheric Administration climate and hurricane scientist Jim Kossin studied the effect and found storms now are more likely to rapidly intensify than they did in the 1980s and “a lot of that has to do with human-caused climate change.”

Eta is the 28th named Atlantic storm this season, tying the 2005 record for named storms. It's the first time the Greek letter Eta has been used as a storm name because after the 2005 season ended, meteorologists went back and determined a storm that should have been named wasn't.

Hurricane season still has a month to go, ending Nov. 30. And in 2005, Zeta formed toward the end of December.