Protesters have set up a guillotine outside a complex in Washington, D.C., where Amazon CEO Jeff Bezos reportedly has a home, according to social media and multiple reports.

Jeff Bezos has committed $10 billion to the fight against climate change. 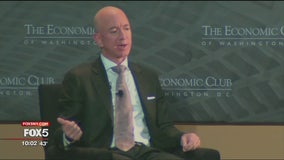 Amazon CEO Jeff Bezos said Thursday he was the target of "extortion and blackmail" by the publisher of the National Enquirer, which he said threatened to publish revealing personal photos of him unless he stopped investigating how other private photos and messages were obtained by the tabloid.