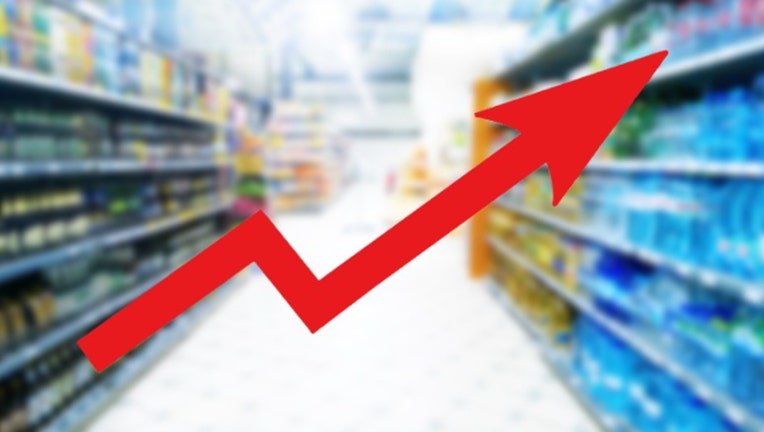 NEW YORK - No doubt you've heard or read a lot of news lately about how inflation is hitting the United States — and much of the world — pretty hard in recent months. So what exactly is inflation?

Chances are you already understand what inflation is even if you don't know the formal definition — that's because inflation has already affected your level of spending. You've noticed that filling up your car costs more. You've been shocked by spiking utility bills. You've shaken your head at the grocery store checkout line.

Simply put, inflation is a measure of how much more goods and services cost over a certain period — usually a year. This translates into how much your cost of living is rising with you doing nothing differently.

"But [inflation] can also be more narrowly calculated—for certain goods, such as food, or for services, such as a haircut, for example," according to an article in Finance and Development, a magazine published by the International Monetary Fund. "Whatever the context, inflation represents how much more expensive the relevant set of goods and/or services has become over a certain period, most commonly a year."

Government agencies measure inflation by surveying households to identify what is called a "basket" of common goods and services and tracking the cost of that basket over time. In the United States, the largest component of the basket — the biggest piece of the spending pie — are housing expenses, such as your rent or mortgage, according to the International Monetary Fund.

The U.S. Bureau of Labor Statistics measures the change in the cost of this basket relative to a base, or reference, year as the Consumer Price Index, or CPI. Then the percentage change in the CPI over a certain period is called consumer price inflation — a.k.a. the most widely used metric of inflation.

Here is another way to look at inflation. It is the decline of purchasing power of a given currency over time, according to a definition of inflation from Investopedia.

"The rise in the general level of prices, often expressed as a percentage, means that a unit of currency effectively buys less than it did in prior periods," Investopedia states.

So your dollar (indeed, your entire paycheck) won't go as far. That $1 pizza slice in Manhattan is now $1.50 (and may even have a bit less sauce, right?). You'll pay as much for a quart of milk as you did for a half-gallon a few years ago.

From the beloved dollar pizza slice to the French baguette, even some of the most iconic foods in the world can't escape from the pain of inflation and the supply chain crisis.

The Bureau of Labor Statistics bases the CPI on the cost of food, clothing, shelter, gas, transportation, medical and dental services, and other goods and services that urban consumers buy for everyday living.

(Urban consumers include professionals, people who are self-employed, unemployed individuals, and retired people as well as urban wage earners and clerical workers; the CPI does not factor in the spending habits of people who reside in rural communities, individuals in the armed forces, and farming families, according to the BLS.)

The bureau's 2021 CPI year in review revealed some stark statistics about cost-of-living increases for Americans. Consumer prices for all items rose 7% from December 2020 to December 2021 — the largest December to December percent change in 40 years. Over the year, food prices increased 6.3% — but the prices of the subset of food that includes meat, fish, poultry and eggs shot up 12.5%. During that time, the price of clothes rose 5.8%, household furnishings and operations increased 7.4%, and piped gas service soared a whopping 24.1%. 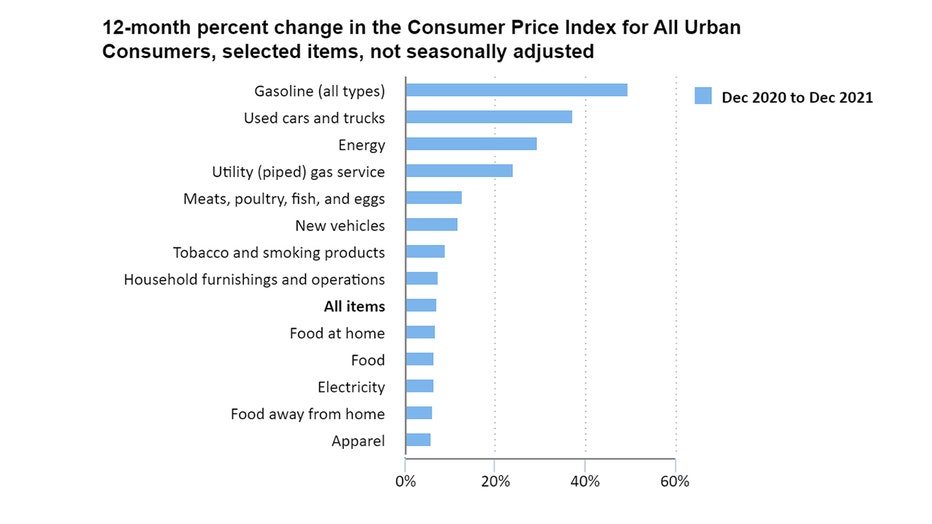 An increase in the supply of money, which can happen in different ways, leads to the loss of purchasing power.

For example, the government can print more money and inject it into the economy by making stimulus payments to individuals, lending new — previously nonexistent — money through the banking system, or legally devaluing its currency.

Why Is Inflation Happening Now?

However, instead of a long-lasting economic downturn, government stimulus spending and the Federal Reserve Bank's emergency moves fueled an economic comeback.

Consumers, even ones who were still staying at home, wanted to spend money. But many businesses had trouble meeting the demand because of shortages in labor and materials.

As business rebounded, U.S. and foreign ports and freight yards couldn't handle the traffic and the global supply chains got entangled, the AP reported.

So with all this pent-up demand and a dearth of supply, costs rose. And many of us — the consumers — have found ourselves paying for those higher costs in the form of bulging price tags.

And consumers shouldn't expect a letup anytime soon. Many large companies have told their investors that they expect supply problems to continue into at least the second half of 2022.

With The Associated Press and FOX TV Digital Team.

Inflation is affecting families and businesses nationwide. Owners of restaurants on Long Island say their costs have shot up but they can only raise prices so much before patrons decide they can't afford that burger and beer.