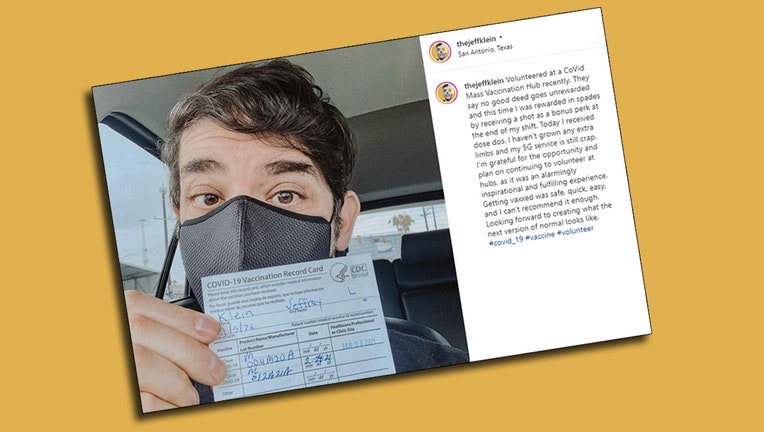 A screenshot of an Instagram post by Jeff Klein of Austin, Texas, holding his COVID-19 vaccination card.

NEW YORK (AP) - Before posting a selfie with her COVID-19 vaccination card on Twitter, Aditi Juneja debated whether to include an explanation for why she was eligible for a shot.

"The first draft of the tweet had an explanation," says Juneja, a 30-year-old lawyer in New York City.

After some thought, she decided to leave out that her body mass index is considered obese, putting her at higher risk of serious illness if infected. A friend who disclosed the same reason on social media was greeted with hateful comments, and Juneja wanted to avoid that.

The rollout of COVID-19 vaccines in the U.S. is offering hope that the pandemic that has upended life around the world will finally draw to an end. But as distribution widens in the U.S., varying eligibility rules and unequal access to the coveted doses are also breeding guilt, envy and judgment among those who've had their doses — particularly the seemingly young and healthy — and the millions still anxiously awaiting their turn.

Adding to the second-guessing about who should be getting shots is the scattershot feel of the rollout, and the sense that some might be gaming the system. Faced with a patchwork of confusing scheduling systems, many who aren't as technically savvy or socially connected have been left waiting even as new swaths of people become eligible.

The envy and moral judgments about whether others deserve to be prioritized are understandable and could reflect anxieties about being able to get vaccines for ourselves or our loved ones, says Nancy Berlinger, a bioethicist with the Hastings Center.

Stereotypes about what illness looks like are also feeding into doubts about people's eligibility, even though the reason a person got a shot won't always be obvious. In other cases, Berlinger says judgments could reflect entrenched biases about smoking and obesity, compared with conditions that society might deem more "virtuous," such as cancer.

Yet even though a mass vaccination campaign is bound to have imperfections, Berlinger noted the goal is to prioritize people based on medical evidence on who's most at risk if infected.

Nevertheless, the uneven rollout and varying rules across the country have some questioning decisions by local officials.

In New Jersey, software developer Mike Lyncheski, 58, was surprised when he learned in January that smokers of any age were eligible, since he knew older people at the time who were still waiting for shots.

"It didn't seem like there was medical rationale for it," says Lyncheski, who isn't yet eligible for the vaccines. He also noted there's no way to confirm that people are smokers, leaving the door open for cheating.

The suspicions are being fueled by reports of line-jumpers or those stretching the definitions for eligibility. In New York, a Soul Cycle instructor got vaccinated after teachers became eligible in January, the Daily Beast reported, and later apologized for her "terrible error" in judgment. In Florida, two women wore bonnets and glasses to disguise themselves as elderly in hopes of scoring shots. Hospital board members, trustees and donors have also gotten shots early on, raising complaints about unfair access.

It's why some feel obligated to explain why they were able to get the vaccine. In an Instagram post, Jeff Klein held up his vaccination card and noted he was given a shot as a volunteer at a mass vaccination hub.

"I definitely mentioned it on purpose, because I didn't want people to get the wrong idea," says Klein, a 44-year-old musician in Austin, Texas.

As she waited for a shot in Jacksonville, Florida, 33-year-old Amanda Billy said it could be frustrating seeing people her age in other states posting about getting vaccinated. She understood that state rollouts vary, but felt anxious because she has a medical condition that makes COVID-19 "very real and scary."

"I'm just happy for them that they got it. But also, I want it," she said in an interview before getting her first shot.

Others are finding they are opening themselves up to criticism when sharing news that they got a shot. Public figures in particular might become targets of second-guessing by strangers.

In New York, local TV news co-host Jamie Stelter posted a photo of herself after getting a first shot last month. Many replies were positive, but others noted that she didn't look old enough or that she must "have connections."

Some couples talk to FOX 5 NY about being in a relationship where one is vaccinated but the other isn't.

Afterward, Stelter's co-host Pat Kiernan weighed in and tweeted that the "you don't look that sick to me" commentary she received was "evidence of the hell that COVID has placed us in."

For Juneja, the decision to get a shot after becoming eligible wasn't easy, given the struggles she knew others were having securing appointments because of technology, language or other barriers. But she realized it wouldn't help for her to refrain from getting vaccinated.

"It's not like with other types of things where I could give my spot to someone else who I think is more in need," she says. "We are sort of all in this situation where we can only really decide for ourselves."