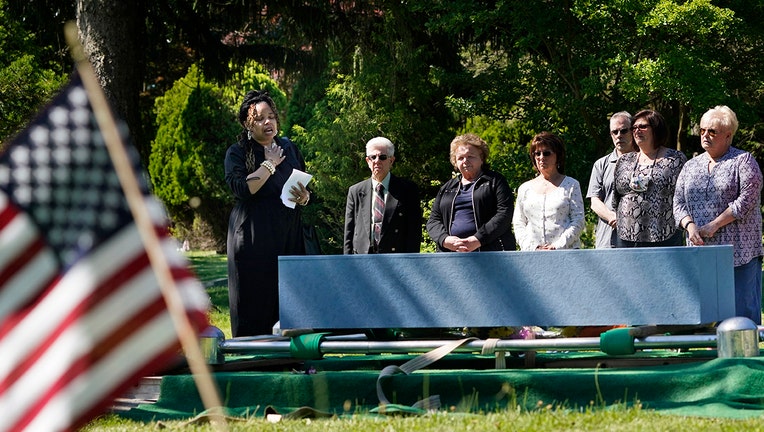 NEW YORK (AP) - On a sun-soaked morning last month, a dozen mourners gathered by a freshly dug grave to bury four people who were cast into limbo as New York City contended with COVID-19.

Each was among hundreds of people whose bodies have lingered in a temporary morgue that was set up at the height of the city's coronavirus crisis last year and where about 200 bodies remain, not all of them virus victims.

The fenced-off temporary morgue on a pier in an industrial part of in Brooklyn is out of sight and mind for many as the city celebrates its pandemic progress by dropping restrictions and even setting off fireworks. But the facility — which the city plans to close by the end of the summer — stands as a reminder of the loss, upheaval and wrenching choices the virus inflicted in one of its deadliest U.S. hotspots.

"But we know that they lived, not friendless, but with friends and family," Edwina Frances Martin, Staten Island's public administrator of estates, told a handful of Brown's friends and volunteers who attend such funerals. "Because now they're all part of our family. And we're a part of theirs."

Some New Yorkers are troubled that hundreds of others at the morgue still wait to be laid to rest.

"Still these bodies wait — for what?" asks Kiki Valentine, a Brooklyn minister and funeral services assistant. She wrote to officials to seek an explanation and propose steps she feels could help, such as publishing public obituaries for the deceased. 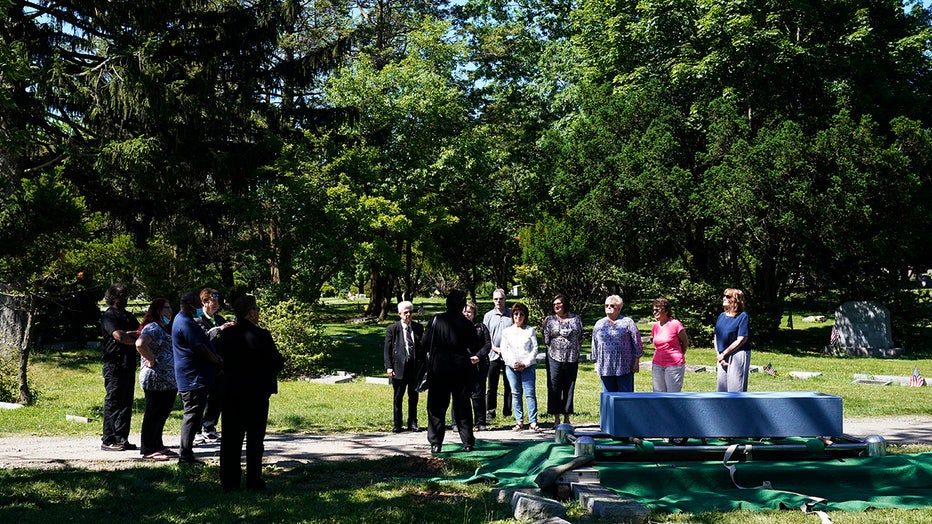 Several people, primarily volunteers, attend the burial of four people at a cemetery in Staten Island, N.Y., Thursday, June 17, 2021. The deceased died during the coronavirus pandemic and were being stored at a temporary morgue in Brooklyn. (AP Photo

Virus deaths alone peaked above 800 a day citywide at one point in April 2020 — deaths from all causes usually average about 150 — and overwhelmed funeral homes, cemeteries and hospital morgues. The temporary morgue was established that month to give families more time to arrange funerals after the city shortened its timeframe for holding remains before burying them in a public cemetery on remote Hart Island. There is no rule for how long bodies can stay at the temporary facility.

"There was way too much death for the system to handle," recalls Amy Koplow, the executive director of the Hebrew Free Burial Association, which is interring some Jewish people who were at the temporary morgue.

"We feel really good that we are able to bury these people who have been unburied and in limbo for so long," she said.

Still, Koplow feels the medical examiner's office did its best in a maelstrom. Many cases require considerable searching for relatives, a will or other indications of the deceased's wishes, she noted.

As the medical examiner's office prepares to close the temporary Sunset Park facility, the agency has stopped taking newly deceased people there, and investigators are working to contact relatives and determine final arrangements for the roughly 200 whose remains are left, spokesman Mark Desire said via email last week. 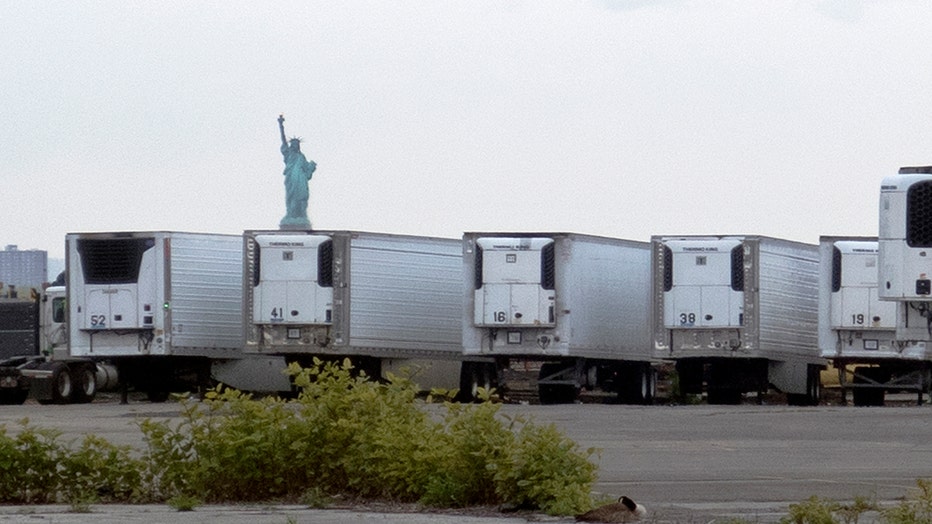 The Statue of Liberty rises in the distance above trucks at a temporary morgue on a pier in Brooklyn, N.Y., May 6, 2020. (AP File Photo)

That's down from 750 when the agency briefed City Council members in early May, saying investigators had found relatives in most cases but was awaiting their decisions or had stopped hearing back from them.

Desire didn't respond to questions about where bodies removed from the facility have been taken, why the temporary morgue stayed in use after the 2020 surge subsided or how many of the deceased there are virus victims.

Brooklyn Borough President and mayoral hopeful Eric Adams has asked City Hall to ensure that every effort is made to reach relatives of the deceased and help with applications for government-paid funeral reimbursement, spokesman Ryan Lynch said. (The city can provide up to $1,700, and a federal program specific to COVID-19 deaths allows up to $9,000. Burial on Hart Island is free.)

Meanwhile, Rabbi Regina Sandler-Phillips — who has organized volunteers to keep at-home vigils for the dead around the world, especially the unclaimed and unnamed — ventures periodically to an unobtrusive spot near the temporary morgue. She goes to bear witness "to what is not seen, and those who are not named," she says.

The pain surrounding the facility's creation and continued use "highlights the difficulties of how we honor the dead," she says.

The group at Ocean View Cemetery on June 17 was there to bear witness, too.

"We don't want them to go to their final resting place alone," said Diane Kramer, a volunteer with a charity called the Foundation for Dignity. It works with Martin's office, which arranged the burial at the private cemetery.

Little information could be confirmed about Davis, who was 76, and Quince, 62.

Varga, 81, had a background in information science and business consulting, spoke four languages and worked in recent years on a documentary film about homelessness, according to his social media profiles.

He was in poor health, said friend Sandra Andrews, who said he was estranged from his relatives but became a father figure to her after they met in 2010. She said she tried to find out what happened to him after he was hospitalized in February but learned of his Feb. 2 death only from The Associated Press.

A pier in Brooklyn is now a temporary morgue. Dozens of refrigerated trucks hold human bodies until they can be claimed by families or funeral homes.

"I didn't get an opportunity to properly say goodbye to him," she said by email.

Brown, 51, was a taxi driver and dispatcher on and off for 30 years, according to co-worker Desereeanne Fisher and boss Anton Kumar.

They said Brown was hardworking and sometimes even slept in the office, where co-workers still have his beloved bowling ball.

He told friends he'd been disconnected from his family since childhood, but he was "a friend to everybody," Fisher said, wiping tears. "Anything you needed, he would do for you."

Brown fell and hit his head at a convenience store this past March 2 and was found dead in his van minutes later, killed by a blood clot, Fisher said. She said his colleagues wanted to arrange and chip in for a funeral but hit roadblocks because they weren't relatives.

"It's been no closure" since his death, she said, relieved to know he'd finally been buried in a shady plot, with a plaque dedicated by his friends.

"He might not have had family," she said, "but he had a lot of people that loved him."