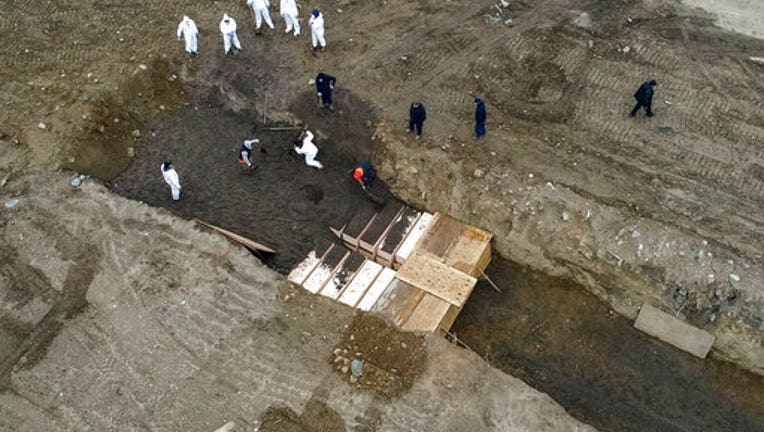 NEW YORK - At various points in history, a 131-acre island in the Long Island Sound has housed a Civil War internment camp, a psychiatric institution, a military missile site, a homeless shelter, and a jail. Eventually, only a burial ground remained on Hart Island, which is part of the Bronx.

The so-called potter's field is the final resting place for about a million people. In recent years, workers—usually inmates from Rikers Island—bury about two dozen or so bodies once per week, usually unclaimed or unidentified. Most often, the family cannot afford a funeral or even requests burial there.

But during the height of the New York City's coronavirus outbreak, burials skyrocketed so much that the Department of Correction, which oversees the island, hired contract workers to keep up with the influx of human remains and performed about two dozen burials over the course of five days a week.

"Throughout the pandemic, we have continued to conduct burials at the city cemetery with dignity, respect, and a solemn sense of duty," spokesperson Jason Kersten told FOX 5 NY. "It is hard to understate the dedication of the people who perform this difficult and important work."

Since March 3, crews have buried 725 people on Hart Island. The peak came the week of April 6, when 138 adults were buried, according to data from the Department of Correction. (The Office of the Chief Medical Examiner does not provide the cause of death of whoever is sent to Hart, so it isn't clear if these were all COVID-19 victims.)

As another day with the coronavirus death toll in New York spiking to a new record, the city is interring the bodies of victims on Hart Island’s potter’s field, normally used for people whose families cannot afford a funeral.

Aerial images from April show workers wearing full protective suits laying caskets in large trenches dug by heavy equipment. The DOC pointed out that wearing full PPE for these burials is a state regulation and not specific to the coronavirus pandemic.

As coronavirus hospitalizations and deaths have fallen, so have the burials on Hart Island. The DOC has dialed back burials to two days per week, Kersten said. In the week of May 18, workers buried 48 adults there.

Under the city's guidelines, the department will exhume remains at the request of the family at no cost. Since March 9, just one body has been disinterred.

At this time, Hart Island is closed to visitors because of the coronavirus outbreak. But even in safer times, visiting the island is restricted and difficult. In late 2019, the city passed legislation that seeks to make the island more accessible with the help of the Department of Parks and Recreation.

What you need to know about Hart Island burials

Melinda Hunt is the director of the public charity, Hart Island Project. She shared details and answered common questions about the public burial site particularly for COVID-19-related deaths.