NEW YORK - Crowds defied a curfew in New York City on Tuesday night as a large crowd of protesters poured into Lower Manhattan and there were reports of sporadic looting.

Thousands marched over the Manhattan Bridge into Lower Manhattan.  They were greeted by a large police presence that did not allow them to move further into the city.

Social media posts showed people breaking into a Zara and a Version store in Lower Manhattan.  Police were seen arresting some of the looters.

Mayor Bill de Blasio had extended the curfew in New York City in an effort to curb the looting throughout the city following protests over the death of George Floyd in Minneapolis.

Speaking alongside NYPD Commissioner Dermot Shea, de Blasio announced Tuesday that the curfew would be in effect three hours earlier beginning at 8 p.m. and ending at 5 a.m. through June 7.

Protesters who were defying the curfew were in a standoff with the NYPD on the Manhattan Bridge on Tuesday night.

The NYPD banned most nonessential traffic in much of Manhattan after 8 p.m. as part of its effort to enforce the curfew.

Also, for-hire vehicles—such as those operating for Uber, Lyft, and other car services—are banned from 8 p.m. to 12:30 a.m. After that, those vehicles can resume service "to assist essential workers returning home or going to work in the overnight hours," according to the city.

Any yellow or green taxis operating between 8 p.m. and 12:30 a.m. "must be transporting an essential worker and proof from passenger may be required," officials said.

The NYPD has canceled regular days off for uniformed officers until further notice in order to manage the workload, according to an NYPD spokesperson.

"We are going to bring in every available police officer where they are needed," de Blasio said.

The first night of the curfew began at 11 p.m. but was ignored in certain neighborhoods where wild looting and protests took place late into the night.

Nearly 700 people were arrested late Monday into Tuesday while many others were issued summonses. Commissioner Shea said the number of arrestees would likely increase as more precincts issued reports.

On Monday, several big marches went off peacefully, with one hours-long demonstration in Brooklyn allowed to continue long after the curfew.

Peaceful protests throughout the day turned destructive as the night wore on. Looters targeted several shops in Manhattan's Herald Square, including the Macy's flagship department store, on Monday night. Images posted on social media showed dozens of police officers entering Macy's to go after the people who broke in. The store's windows were covered in plywood.

Looting and destruction despite curfew in NYC

The curfew did nothing to prevent the destruction of businesses throughout the city. Robert Moses and Raegen Medgie report.

For a second night, roving bands of young people attacked businesses in Manhattan's glitzy shopping districts and a poor neighborhood in the Bronx, where shops were looted and rubbish set on fire.

People rushed into a Nike store and carried out armloads of clothing. Storefront windows were smashed near Rockefeller Center and wreckage littered the inside of an AT&T store.

"Even in the days after the protests, we did not see this. It is never, ever accepted," de Blasio said.

When asked by a reporter about what appears to be a lack of control by law enforcement in some areas where curfew breakers and looters were not stopped, de Blasio said it was a "mischaracterization of reality." 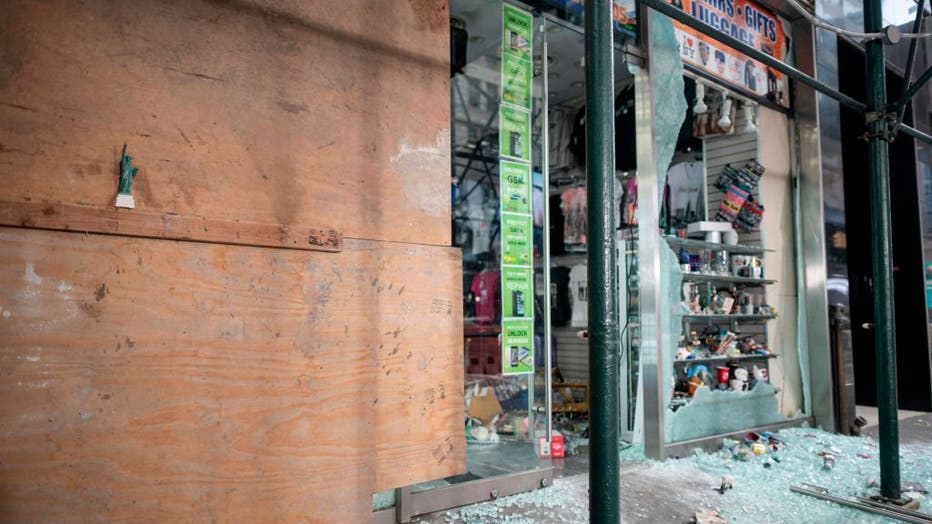 A Statue of Liberty figure (L) is seen on a board next to a looted souvenir shop after a night of protest over the death of an African-American man George Floyd in Minneapolis on June 2, 2020 in Manhattan in New York City. Photo by JOHANNES EISELE/AF

In Chelsea, throngs of people ignored the curfew and stormed a large grocery store and took off with whatever they could grab.

"The NYPD and mayor did not do their job last night," Gov. Andrew Cuomo said during a briefing Tuesday. "Look at the videos. It was a disgrace. I believe the mayor underestimates the scope of the problem. I don't think they've used enough police to address the situation. It was not addressed last night."

President Donald Trump has encouraged governors across the country to bring in the National Guard to address the protests and looting, but it's a move de Blasio said he would not allow in New York City.

The governor says the response by de Blasio to the riots has been a disgrace.

The violence has threatened to overshadow the anger over the death of Floyd, a black man who died on May 25 after a white Minneapolis police officer pressed a knee on his neck until he stopped breathing.

"The people who live in New York want New York to end the violence,” Monahan said.