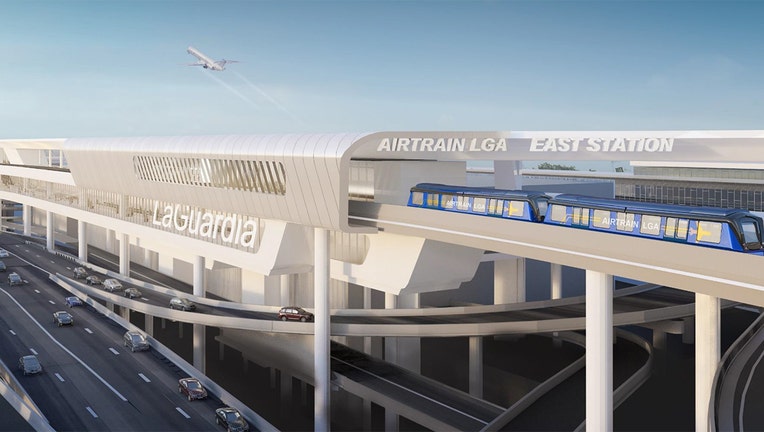 A rendering of the proposed AirTrain pulling into LaGuardia Airport. (Via Port Authority/Governor's Office)

NEW YORK - A $2 billion project to build a rail link connecting New York City to LaGuardia Airport was officially put on hold Tuesday, after weeks of criticism from public officials and a lawsuit from neighborhood and environmental groups.

In a news release, the Port Authority of New York and New Jersey said it is pausing the project to consider alternatives.

In recent weeks, Democratic New York Gov. Kathy Hochul had criticized the project, which was championed by her predecessor, Andrew Cuomo. Democratic Rep. Alexandra Ocasio-Cortez, who represents part of the area the link would pass through, also has spoken out against it, as has outgoing New York Mayor Bill de Blasio.

The Federal Aviation Administration issued environmental approval in July but recently had asked the Port Authority to reconsider in light of a lawsuit filed by neighborhood and environmental groups.

Preliminary construction on the roughly $2 billion, 1.5-mile (2.4-kilometer) elevated link was to begin this year.

Public and transit officials have sought for years to build a rail link to LaGuardia, which opened more than 80 years ago and remains one of the few major U.S. airports without rail service. In a preliminary report last year, the FAA said it reviewed dozens of other proposed alternatives including ferry service, improved bus service and the extension of subway service to the airport.

The monorail was the best alternative because it provides "a time-certain transportation option and supplemental access" to the airport and will reduce vehicle traffic, the FAA wrote in July. The FAA also concluded the project was "reasonable to construct and operate given cost considerations" and wouldn't affect subway or rail service during construction.

NY Gov. Kathy Hochul wants the Port Authority to look for another alternative to connect travelers to LaGuardia Airport and scrap the AirTrain plan.

Critics had opposed the plan, saying it would negatively impact the Queens neighborhoods it traverses and wouldn't be appreciably faster than driving since it would involve taking a train or subway from points east or west to a stop serving Citi Field, home of the New York Mets, then switching to the rail link.

In a lawsuit filed last month, environmental and neighborhood groups asked the FAA to request the Port Authority to pause the project, alleging it was pushed through too fast by Cuomo and the Port Authority and used arbitrary screening criteria to pre-empt meaningful consideration of numerous alternatives to the rail link.

Some of those alternatives include ferry service, the extension of existing subway lines and optimized bus service using dedicated lanes.

Michael Dulong, an attorney for Riverkeeper Inc., one of the groups that filed the lawsuit, said Tuesday the group isn't opposed to the project per se, but wants a more thorough review.

"It's going to take parkland from an environmental justice community," he said. "We just want to make sure this is the right project for New York City."

Port Authority officials said last year that the plan wouldn't require the taking of any public property and that the rail link's initial proposed path was shifted to the north, further away from a neighborhood that sits across the Grand Central Parkway from the airport.

New York Gov. Kathy Hochul has indicated that her administration will explore possible alternatives to the already-planned AirTrain to LaGuardia Airport.