NEW YORK (AP) - Travis Kessel never imagined his work could hurt this much.

The FDNY paramedic became hooked on helping people as a volunteer fireman in the aftermath of Superstorm Sandy in 2012, scrapping plans to study law in college and instead pursuing a career in emergency services.

It's given him a life — and a wife — he loves. She's an emergency room nurse and they met a few years ago when he brought a patient to the hospital where she worked in Queens. 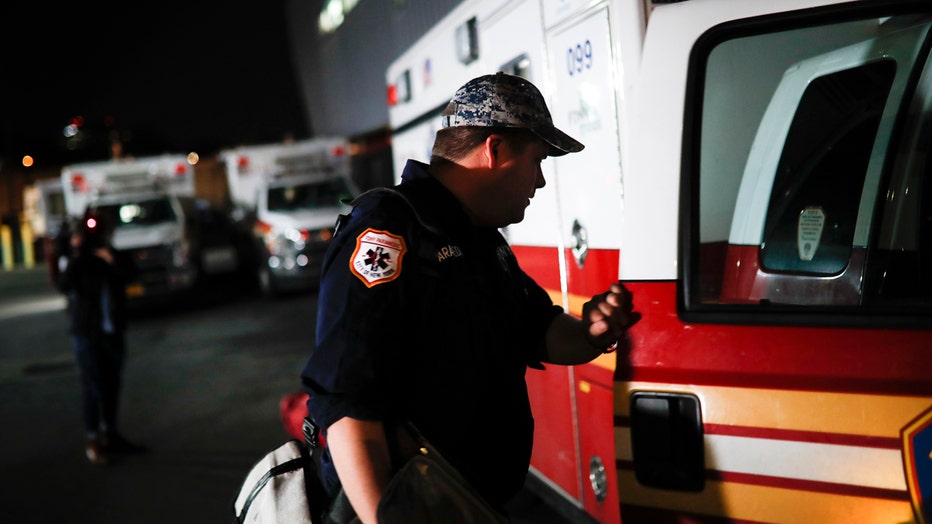 Paramedic Travis Kessel outside his station house after working a shift, Monday, April 6, 2020, in the Bronx, New York. Kessel never imagined his work could hurt this much. (AP/John Minchillo)

Now, he worries about the toll it's taking on both of them and their colleagues, who are seeing sickness and death like never before.

"It really is an incredibly rewarding job and it's just, right now the stress of it and everything going on, it just eats away at you," Kessel said. "It eats you up a little bit every day."

Kessel's 12-hour shifts are now sometimes 16 hours or longer, as more and more first responders fall ill themselves. When possible, he'll finish at his station in the Bronx and pick his wife up outside her hospital in Manhattan, where he watches a steady stream of people who are giving their all and finding it isn't good enough.

"I see all these nurses and doctors and hospital staff coming out of the ERs and most of them are still wearing masks, but all you see is sadness in their eyes like as if they had lost relatives themselves," he said. "It's hard not to personalize these things."

Kessel, who turns 29 next week, has years of training and has done teaching himself. But no course could have prepared his crew for what they're seeing with the coronavirus, which has sent citywide emergency calls soaring — in some cases to more than 6,000 daily.

He used to respond to around five per day. Now that's doubling and sometimes tripling, often cardiac arrests or other serious situations from which there will be no recovery.

"It's the volume and the volume of these critical and dead patients that we've never seen before," Kessel said.

There's little downtime during work now, few places available to blow off steam afterward. He drove five hours round trip to the Jersey Shore on a day off Sunday so his wife could see her parents they urged to flee New York before things got really bad.

Then it was back to work for a 12-call Monday to begin what promised to be a bad week ahead.

"These next two weeks are going to be really trying," Kessel said. "I just hope that these projections are right and that we're going to start a downturn, because it takes its toll already and every day that goes by takes a little bit out of you that you don't know if you're going to get back."