An MTA subway conductor who was not on the job at the time was slashed in the face by a man in an unprovoked attack, said police.

NEW YORK - The NYPD has released surveillance video of the suspect in a vicious assault of an off-duty subway conductor walking away from the scene.

The 52-year-old victim was approached by the suspect on Wednesday at about 11:20 pm. inside the Fulton Street and Crescent Street station in Brooklyn. Without any prior communication, the suspect then slashed the man with an orange boxcutter across the face seriously injuring his left eye, left ear and face, said police. 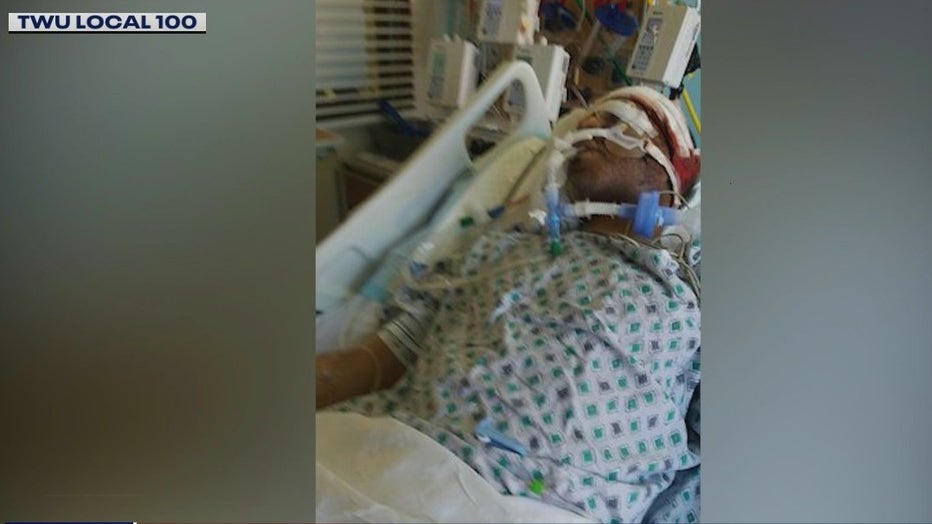 An off-duty subway conductor was slashed in the face with an orange box cutter. (NYPD)

The suspect got off the train at Crescent Street. EMS responded to the location and transported the victim to Jamaica Hospital Medical Center where he was listed in stable condition.

NYPD Commissioner Dermot Shea says he will move police into the subway system as he sees fit.

"It's just horrible and one too many," said Shea. "We are asking New Yorkers specifically on that train at Crescent Street in Brooklyn. We think there were a couple of witnesses that were there that probably saw something. We need you to call the NYPD, go on to the Twitter page or call the Crime Stoppers hotline."

The suspect is described by police as a male, in his 40s, with a medium complexion, approximately 5'9" tall, weighing 185 lbs., and with a medium build. He was last seen wearing a gray jogging jacket, blue jeans, sneakers, surgical mask, and a baseball cap.

Mayor Bill de Blasio is insisting that New York City's subways are safe, while the MTA is demanding an increased NYPD presence in the city's subways after a string of recent attacks on conductors.

The NYPD shared video of the suspect walking on Crescent Street after the incident.

Anyone with information in regard to this incident is asked to call the NYPD's Crime Stoppers Hotline at 1-800-577-TIPS (8477).  The public can also submit their tips by logging onto the Crime Stoppers website at WWW.NYPDCRIMESTOPPERS.COM, or on Twitter @NYPDTips.

Man barricades self in conductor cab

An emotionally disturbed man barricaded himself inside the conductor's cab of a J train Wednesday at the Broad Street subway station in Manhattan.

The MTA is asking for an increased police presence on New York City's subways after a string of violent attacks that are under investigation by the NYPD.