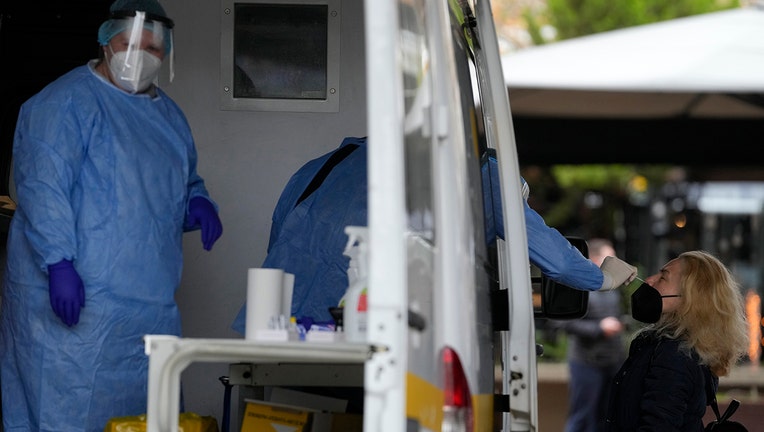 A member of the medical staff at the National Public Health Organisation (EODY) conducts a COVID-19 rapid test on a woman in Athens, Greece, Wednesday, Dec. 29, 2021. (AP Photo/Thanassis Stavrakis)

Greece's health minister said Wednesday that music will be banned at all commercial venues for New Year's celebrations as part of new restrictions announced in response to a surge in COVID-19 infections fueled by the omicron variant.

The restrictions, originally planned to take effect on Jan. 3, will start early Thursday after the daily number of infections rocketed to nearly 22,000 Tuesday, more than double the record number reported the previous day.

Wednesday also saw a new record number of infections, with health authorities announcing 28,828 new coronavirus cases. The country of around 11 million people is recording dozens of daily deaths due to COVID-19, with 72 announced Wednesday.

"Omicron is now the dominant variant in terms of new infections," Health Minister Thanos Plevris said during a livestreamed briefing.

Much about omicron remains unknown, including whether it causes more or less severe illness.

Included in Greece's measures are the mandatory use of high-protection masks at supermarkets and on public transport, schedule changes and additional work-from-home orders for government employees, and strict capacity limits at sporting venues.

Entertainment venues will close at midnight starting Thursday, but they will be allowed to stay open until 2 a.m. for New Year's Eve.

Greece now has more than 1.1 million confirmed cases since the start of the pandemic, and more than 20,600 deaths.