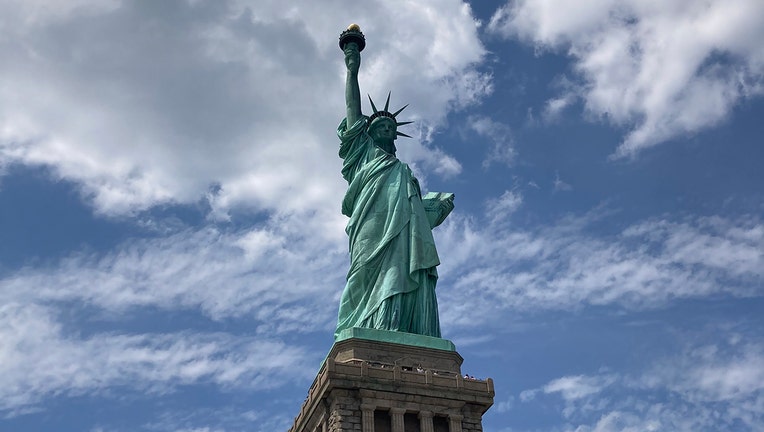 NEW YORK - Few places in the U.S. have a more deeply ingrained reputation as a refuge for immigrants than New York City, where the Statue of Liberty rises from the harbor as a symbol of welcome for the worn and weary.

But for Mayor Eric Adams, reconciling that image with an influx of migrants landing in the city, including thousands being bused there by Republican Gov. Greg Abbott of Texas, is proving difficult. The city is struggling to accommodate what Adams says has totaled more than 13,000 asylum seekers, leading him to explore whether New York can ease its practices for sheltering the homeless or even temporarily house migrants on cruise ships. Both ideas have drawn blowback from liberal advocates who are influential in the city's politics.

Adams is one of several leaders of Democratic-leaning jurisdictions facing a sudden test of their commitment to being "sanctuary" cities or states. The designation, in which local officials pledge to limit their cooperation with federal immigration authorities, has long proved popular among progressives pressing to ensure the government treats migrants humanely.

But officials say the policy is being exploited by leaders hoping to make a political point.

"We are not telling anyone that New York can accommodate every migrant in the city. We're not encouraging people to send eight, nine buses a day. That is not what we're doing," Adams said this week about his request for Abbott to coordinate with the city about the buses of migrants he's sending. "We're saying that as a sanctuary and a city with right to shelter, we're going to fulfill our obligation."

A newly arrived asylum seeker who had been staying at a shelter in New York City since arriving from the southern border has died by suicide. Mayor Eric Adams said the tragedy is a reminder that we have a legal and moral obligation to help people. The mayor said New York will fulfill its obligation as a right-to-shelter city.

The GOP effort began in the spring when Abbott and Gov. Doug Ducey of Arizona put migrants on buses to Washington and later New York. The move was intended to draw attention to what the GOP governors deemed failed border and immigration policies under Democrats and the Biden administration. Florida Gov. Ron DeSantis intensified the tactic, chartering a flight last week to Martha's Vineyard, an elite Massachusetts vacation spot.

The unpredictability that Adams referenced is precisely what the governors say they're trying to accomplish.

"If you believe in open borders, then it's the sanctuary jurisdictions that should have to bear the brunt of the open borders," DeSantis said at a news conference Tuesday.

Abbott's office has dismissed complaints and says Democratic officials should call for President Joe Biden to secure the border "instead of complaining about fulfilling their sanctuary city promises."

Sanctuary cities or states are not legal terms but have come to symbolize a pledge to protect and support immigrant communities and decline to voluntarily supply information to immigration enforcement officials. Advocates say they are havens for immigrants to feel safe and be able to report crime without fear of deportation.

Adams isn't the only leader struggling to navigate the challenge.

In Washington, D.C., where Abbott has sent about 8,000 migrants this year, Democratic Mayor Muriel Bowser has declared a limited state of emergency. She sought help from the National Guard, which the Pentagon has denied. The D.C. Council on Tuesday voted to create an Office of Migrant Services to help asylum seekers.

Democratic Gov. J.B. Pritzker of Illinois brought in the Illinois National Guard to assist more than 750 migrants who have arrived in Chicago since late August, but officials in some Chicago-area suburbs have complained that they got no notice when dozens of asylum-seekers were put up in local hotels for emergency housing.

Burr Ridge Mayor Gary Grasso, a Republican, said both Pritzker and Chicago Mayor Lori Lightfoot apologized for not giving him advance notice, echoing complaints by Democrats that the Republican governors had not provided a warning the migrants were coming. But Grasso's town has not been asked to provide any resources to help with the migrants, and all the hotel rooms are being paid for by the state, county and city of Chicago, according to Pritzker's office.

Laura Mendoza, an immigration organizer for advocacy organization The Resurrection Project, said putting migrants in suburban hotels has helped relieve some pressure but finding everyone a place to stay has been a challenge.

Could NYC migrants end up being housed at summer camps?

The city says it is considering all options when it comes to finding places to house migrants as Texas continues to send buses full of people to New York City.

Mendoza said she has lost count of how many buses she has helped welcome at Chicago's Union Station as they arrive from Texas. After a 24-hour bus ride with minimal breaks, she said, some of the people disembark dehydrated and with swollen legs from sitting so long. Others have bruises and scars from their journey, Mendoza said.

"Unfortunately," she said, "we don't have a lot of answers other than: 'You're going to have a safe place to sleep tonight."

Tens of thousands of migrants who cross the border illegally are released in the United States each month to pursue their immigration cases, a practice that accelerated during Donald Trump's presidency and has reached new levels during the Biden administration.

To avoid the time-consuming task of scheduling court appearances, the Border Patrol has sharply expanded use of humanitarian parole. Migrants are released with an order to appear at a U.S. Immigration and Customs Enforcement office.

In New York City, Adams said he is considering legal action against the GOP governors. He said Monday that the city had opened an investigation after one woman seeking asylum died by an apparent suicide over the weekend at a New York City shelter.

His administration has been strained by a long-standing court-ordered "right to shelter" law requiring the city's homeless services to provide shelter to anyone without a roof over their head. Adams has recently suggested reassessing how the city complies with the law, but he said Tuesday he would not consider trying to send the migrants back to border states.

Timothy Cardinal Dolan, the archbishop of New York, discusses the difficult circumstances facing hundreds of asylum-seeking migrants who are arriving in the city from Texas and Catholic Charities, which is working to help them.

"It would be the wrong thing to do, and it would send the wrong message," he said. "When I look at the large number of other communities that have come from other places to experience the American dream, what would've happened if we would've sent them back? That is not who we are as a country."

New York City opened a resource center last week to connect migrants with services like legal help, housing and medical care. Adams is exploring whether New York can get the migrants permits to work, perhaps in the city's short-staffed restaurants.

Sandro Hidalgo, a Venezuelan construction worker who arrived last week on a bus sent from El Paso, is among those being sheltered in New York and said he's looking for work.

"I feel like there is an intention to help, but there is no organization," he said. "There are no beds to sleep. I slept on the floor last night, inside, but on the floor. I am trying to get out of the shelter, but the city is very expensive."