The mayor said New York will fulfill its obligation as a right-to-shelter city.

NEW YORK - New York City shelters are overwhelmed due to thousands of migrants coming by bus from Texas, prompting the mayor to explore unique ways to provide temporary housing. One idea he is floating is using cruise ships as temporary housing.

In an interview on Sunday, Mayor Eric Adams said the city is looking into the legality of using cruise ships.

On Monday, the New York Times reported that the mayor's chief of staff has spoken with Norwegian Cruise Line to discuss the possibility of housing asylum seekers on one of its ships.

At an event on Monday, Adams was asked about the cruise ship plan.

In a joint statement to FOX 5 NY, the Legal Aid Society and Coalition for the Homeless said the city needs to focus on transitioning people out of shelters and into permanent housing and questioned the wisdom of the cruise ship plan.

"Cruise ships are not designed to provide shelter and services to homeless people, especially those with disabilities, and they will likely be docked in locations that would impede critical access to jobs, health care, schools, child care, community-based services, and much more. They also raise potential public health issues with respect to coronavirus transmission," Legal Aid and Coalition for the Homeless said in the statement. "The City has assured us that any new shelters would comply with all applicable rules and court orders, and we look forward to reviewing a plan to ensure that this remains the case with any new sites that come online, including potential cruise ships." 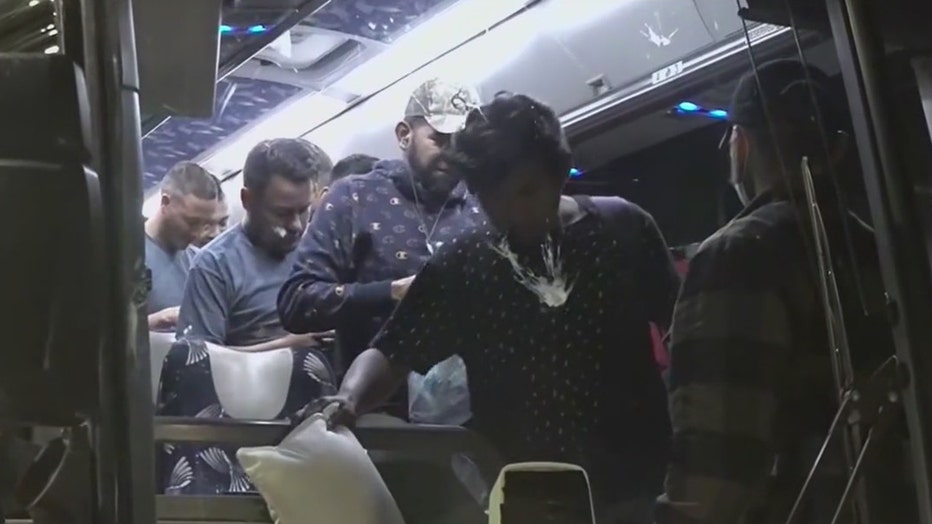 The cruise ship plan comes as more than 11,000 migrants have arrived since May on buses sent from Texas. The city has been paying for hotel rooms for some newly arrived migrants.

"Places that are outside of the city would make it hard for people to get to appointments that they need to get to, to get to court, to get to medical services, and would require a lot of transportation for city staff as well for us and the clients," Josh Goldfein of the Legal Aid Society said.

Adams said some migrants, who are asylum seekers from South America, have arrived with COVID-19, some were dehydrated, and he claims some were "tagged like you were tagging animals."

The mayor also said that a newly arrived asylum seeker who had been staying at a shelter in New York City since arriving from the southern border has died by suicide. Adams said the tragedy is a reminder that we have a legal and moral obligation to help people.