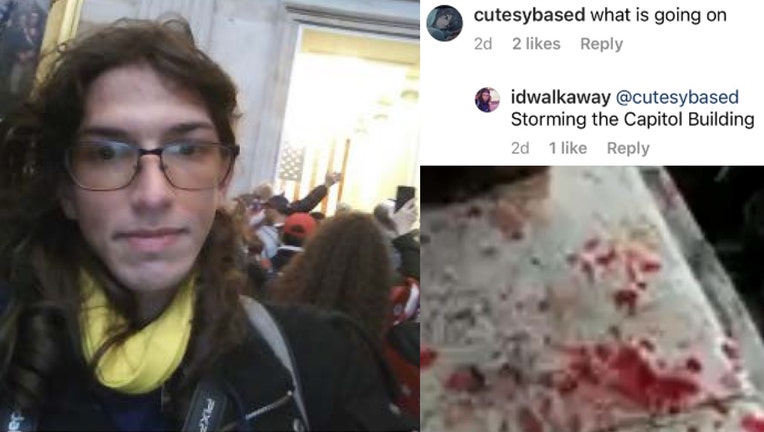 A composite photo shows images released by the FBI.

NEW YORK - A former New York fashion student accused of participating in the Jan. 6 breach of the U.S. Capitol and posting on social media about "storming" it was arrested Monday as the tally of criminal cases kept growing.

Taken into custody at his home in Staten Island, Nicolas Moncada was awaiting a federal court appearance set for Tuesday on charges including entering a restricted building without lawful authority and disrupting government business. It wasn't immediately clear whether he had a lawyer who could speak to the charges. A message was left at a possible phone number for a relative.

According to a court complaint, the campus security office at New York's Fashion Institute of Technology, in Manhattan, brought Moncada to the FBI's attention after faculty members and fellow students saw him posting about the insurrection, in which a mob of President Donald Trump’s supporters sought to disrupt Congress’ certification of President-Elect Joe Biden’s victory.

Moncada has not been enrolled in classes at the school since May 2020 and has not earned a degree. He was majoring in illustration, the school said in a statement.

Moncada's posts included Instagram videos of officers on the Capitol steps, as seen through nearby scaffolding, and what appeared to be blood on the stairs. The images prompted one of Moncada's contacts to ask what was going on, the complaint said.

"Storming the Capitol Building," he replied, later adding that it was where the Senate and House were certifying the vote.

"Nothing to see here Instagram!" the caption read, according to the complaint.

Moncada also posted a photo of himself "outside Pelosi's office."

House Speaker Nancy Pelosi’s office was a target of the rioters. One was photographed kicking his feet up on her desk.

William Sweeney Jr., the assistant director in charge of the FBI’s New York field office, tweeted that Moncada was arrested "for his role in assaulting the U.S. Capitol while our representatives were inside performing their Constitutional duties.

"The FBI continues to perform ours — finding all participants and holding them fully accountable for their actions," he added.

Authorities have opened about 170 investigations into people who potentially committed a crime and have made scores of arrests so far.

With the Associated Press.  This story has been updated to state that Moncada is not currently a student at the Fashion Institute of Technology.