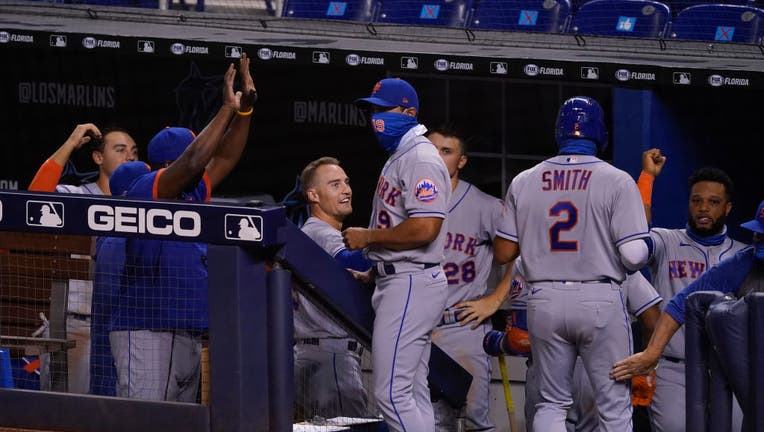 MIAMI, FLORIDA - AUGUST 19: The New York Mets celebrate in the dugout after Dominic Smith #2 of the New York Mets scores in the eighth inning against the Miami Marlins at Marlins Park on August 19, 2020 in Miami, Florida. (Photo by Mark Brown/Getty I

NEW YORK - The season opener for the NY Mets against the Washington Nationals at Nationals Park Thursday night was postponed due to coronavirus concerns among the Nationals, announced the team.

"Tonight’s scheduled game between the Nationals and the Mets at Nationals Park has been postponed because of ongoing contact tracing involving members of the Nationals organization. Out of an abundance of caution, the game will not be made up on Friday."

General manager Mike Rizzo announced Wednesday that a player for the Nationals had tested positive for coronavirus and that four players and a staff member were quarantined.

Rizzo did not identify any of those involved.

"We’re still in the process of finding out exactly what their status is," said Rizzo. "They’re certainly out for tomorrow’s game."

It was not clear when the game would be played even though Friday already had been set up as an off day that could accommodate a game pushed back from Thursday if there were a rainout, for example.

Late Wednesday, the team agreed to a $341 million, 10-year deal, with Francisco Lindor after acquiring him from Cleveland in the offseason, reported the Associated Press.

Thursday was the home opener for cross-town rival the NY Yankees. They were scheduled to take on the Toronto Blue Jays in front of a limited capacity of 10,850 fans due to COVID restrictions.

The 2019 World Series champions — who finished tied for last in the NL East in the pandemic-shortened 2020 season — were supposed to send Max Scherzer to the mound to face New York's Jacob deGrom in a matchup between pitchers who own a total of five Cy Young Awards.

"We will certainly have some roster decisions to make, depending on how this all shakes out," Rizzo said Wednesday.

Word of the positive test came a little after 1 a.m. Wednesday, he said.

RELATED: Opening Day at Yankee Stadium with limited capacity due to COVID restrictions

The team flight from Florida to Washington was where there was close contact between the five people who are quarantining and the player who tested positive.

Scherzer said he was not on that team flight and traveled separately with his family.

The Nationals — who had planned to have a workout at their stadium on Wednesday, before it was called off because of rain — did not have a single player test positive during their six weeks of spring training camp in West Palm Beach, Florida, according to Rizzo.

"We’ve done so well in spring training," Scherzer said. "Everybody across the game — we had seen so few positive cases across spring training as a whole. It just shows you how quickly that can turn. It can turn on a dime. We have to face it, and we have to overcome it."

Rizzo said the team underwent a new round of COVID-19 tests Wednesday, as was previously scheduled — a combination of rapid tests and MLB-mandated saliva tests.