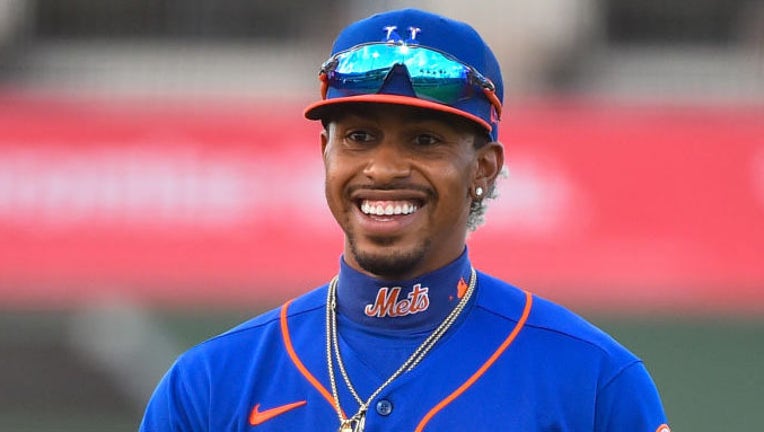 WEST PALM BEACH, FL - MARCH 11: Francisco Lindor #12 of the New York Mets warms up before the start of the spring training game against the Houston Astros at The Ballpark of The Palm Beaches on March 11, 2021 in West Palm Beach, Florida. (Photo by Er

NEW YORK - Francisco Lindor and the New York Mets have agreed to a $341 million, 10-year deal, keeping the All-Star shortstop in Queens for the long haul after acquiring him from Cleveland in the offseason, according to a person familiar with the agreement.

The person spoke to The Associated Press on Wednesday night on condition of anonymity because the deal hadn't been announced.

Lindor was eligible for free agency after this season and said this spring he wouldn't negotiate with the Mets on a long-term contract after opening day. Less than 24 hours before New York starts its season Thursday night in Washington, an agreement was reached.

The 27-year-old Lindor has two Gold Gloves and made four All-Star teams in six seasons with the Indians, hitting .285 with an average of 29 homers, 86 RBIs and 21 stolen bases per 162 games.

He was the prized pickup in new owner Steve Cohen's first offseason, acquired from Cleveland along with right-hander Carlos Carrasco for infielders Amed Rosario, Andrés Giménez and two minor leaguers. New York added Lindor knowing he could walk after the 2021 season, but the team said it would try to negotiate a long-term pact.

MLB Network was first to report on the agreement.

RELATED: Chris Christie joins Mets' board of directors under Cohen

Cohen tweeted Tuesday that Lindor was a "heckuva player and a great guy" and said he hoped to strike a deal. He confirmed the pair had dinner together over the weekend.