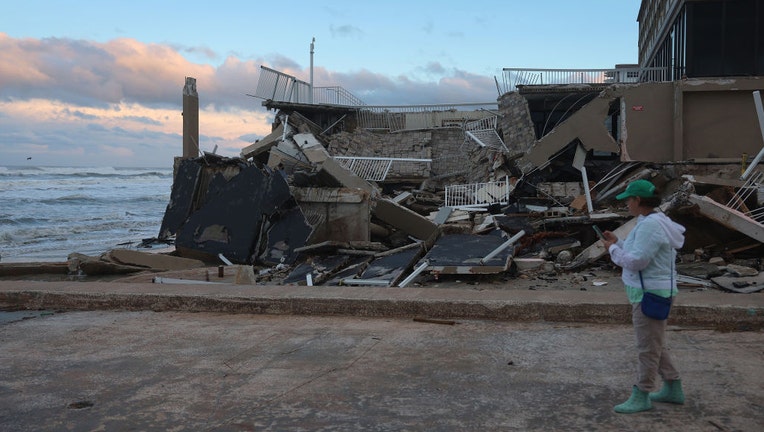 WILBUR-BY-THE-SEA, Fla. - The remnants of Tropical Storm Nicole sent heavy rains falling from Georgia to New York on Friday as flooding and surging ocean waters receded from a stretch of Florida coastline where the most damaging impacts became evident after it made landfall as a hurricane.

Now a depression, Nicole could dump as much as 8 inches (20 centimeters) of rain over the Blue Ridge Mountains and there was a chance of flash and urban flooding as far north as New England.

With the center of the storm about 70 miles (115 kilometers) southwest of Macon, Georgia, and maximum sustained winds at 35 mph (55 kph), forecasters issued a string of tornado warnings in North and South Carolina, although no touchdowns or damage were reported immediately. Much of both states and Virginia were under a tornado watch.

Wrecks added to Atlanta's notoriously bad traffic as rain from Nicole fell across the metro area during rush hour, and a few school systems in mountainous north Georgia canceled classes.

The storm caused at least three deaths and swallowed once-wide stretches of sand in the Daytona Beach area — famous for its drivable beaches — after coming ashore near Vero Beach early Thursday. Some homes toppled into the Atlantic Ocean.

Officials in Volusia County, northeast of Orlando, said Thursday evening that building inspectors had declared 24 hotels and condos in Daytona Beach Shores and New Smyrna Beach as well as at least 25 single-family homes in Wilbur-by-the-Sea to be structurally unsafe, forcing their evacuations.

Nicole's surge was more destructive than those of similar storms in the past because seas are rising as the planet’s ice melts due to climate change, said Princeton University climate scientist Michael Oppenheimer. Higher coastal flooding is flowing deeper inland, and what used to be once-in-a-century events will happen almost yearly in some places, he said.

"It is definitely part of a picture that is happening," Oppenheimer said. "It’s going to happen all across the world.’’

"We’ve never experienced anything like this before," he said.

The lifting of a curfew at 7 a.m. Friday enabled evacuated residents to return to the area to take stock of their properties, if only from the outside, and to begin to figure out whether they'll be able to live there again.

A man and a woman were killed by electrocution when they touched downed power lines in the Orlando area, the Orange County Sheriff’s Office said. Another man died as waves battered his yacht against a dock in Cocoa, despite efforts to resuscitate him by paramedics who managed to get on board as the boat broke away from its moorings, Cocoa Police said.

Nicole also caused flooding well inland, as parts of the St. Johns River were at or above flood stage. Some rivers in the Tampa Bay area neared flood levels, according to the National Weather Service.

Emergency declarations were approved for all 67 Florida counties and the Seminole Tribe of Florida as the sprawling storm moved over the state.

Parts of Florida were devastated by Hurricane Ian, which struck as a Category 4 storm. Ian destroyed homes and damaged crops, including orange groves, across the state — damage that many are still dealing with — and sent a storm surge of up to 13 feet (4 meters) onshore, causing widespread destruction.