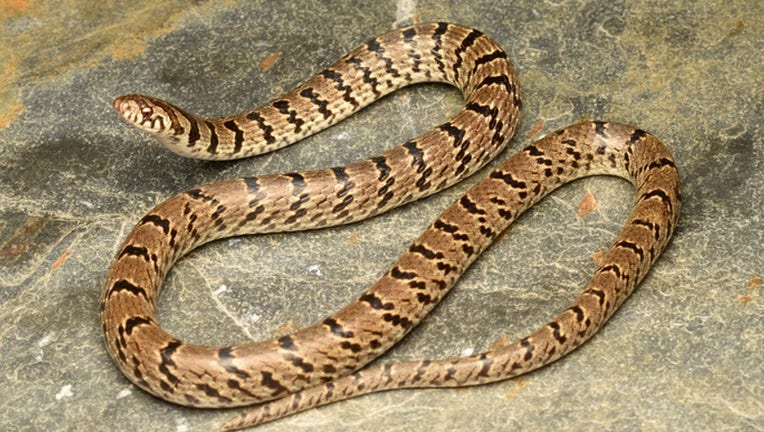 Oligodon churahensis was discovered after a university student in India snapped a photo of it in June 2020. (Credit: American Association for the Advancement of Science)

A new snake species has slithered its way into the list of reptiles after a team of researchers in India spotted the creature in an Instagram photo.

According to a news release from the American Association for the Advancement of Science, Virendar K. Bhardwaj, a university student, started to explore his backyard in Chamba, India. He photographed everything he found and posted pictures on his Instagram page.

In June 2020, he posted a photo of a kukri snake — known for its curved teeth that resemble the Nepali dagger "Kukri".

Zeeshan A. Mirza, a researcher from the National Center for Biological Sciences, Bangalore, saw the snake photo and got in touch with Virendar to find out more about the reptile.

RELATED: Fossils reveal a new dinosaur species that was the size of dogs

Virendar told researchers he found the snake along a mud road over the summer.

Researchers first thought the reptile was a Common Kukri snake, but a herpetologist said it had some unique features that left questions about its identity. However, the COVID-19 pandemic and lockdown slowed the research.

A suspect dubbed the "snake burglar" by police has been successfully evading motion-triggered alarms in Riverside, California, and made off with $8,000 from a hair salon’s safe, along with products, early on November 26, police said. (Credit: Riverside Police via Storyful)

The discovery of the new species was then published in a research paper in the international peer-reviewed journal Evolutionary Systematics.

Scientists labeled the news species "Oligodon churahensis," referencing the Churah Valley in Himachal Pradesh where it was discovered.

"It is quite interesting to see how an image on Instagram led to the discovery of such a pretty snake that, until very recently, remained hidden to the world," Mirza said in the news release.

"Compared to other biodiversity hotspots, the Western Himalayas are still poorly explored, especially in terms of herpetological diversity, but they harbor unique reptile species that we have only started to unravel in the last couple of years," he continued.

Rattlesnake Ready for Its Closeup at Arizona Trail Camera

A trail camera in the Phoenix Mountains, Arizona, was visited by a rattlesnake ready for its close up earlier this year. (Credit: Steven Tippett via Storyful)

Finding new species isn’t uncommon. London’s National History Museum discovered more than 500 in 2020. One was a monkey called the Popa langur, found on the extinct Mount Popa volcano in Myanmar.

"What’s even more interesting is that the exploration of your own backyard may yield still undocumented species," Mirza continued. "Lately, people have been eager to travel to remote biodiversity hotspots to find new or rare species, but if one looks in their own backyard, they may end up finding a new species right there," Mirza said.