The MTA’s latest budget consideration for next year calls for a higher fare hike than expected -- a 5.5% increase, much higher than the 4% increase that's already planned.

NEW YORK - The MTA’s latest budget consideration for next year calls for a higher fare hike than expected -- a 5.5% increase, much higher than the 4% increase that's already planned.

CEO Janno Lieber stressed the importance of keeping mass transit running amid an impending financial crisis at Wednesday’s board meeting, saying, "This is a plan that is designed to protect riders. Our priority is maintaining service."

But the MTA’s proposed 2023 budget plan will also cost riders more money. Riders would pay $2.90 per ride compared to the current $2.75 they pay now.

CFO Kevin Willens still says that won’t be enough to make up for pandemic-related deficits tied to a dramatic drop in ridership.

"This continued lower ridership is a result of the lasting effects of the pandemic as we discussed. This creates revenue shortfalls in excess of $2 billion per year from 2023 through 2026."

MTA in dire need of funding, according to new audit

The MTA desperately needs extra funding and to get riders back to using public transit at pre-pandemic levels or face billions of dollars in debt, according to a new report.

Current ridership is hovering at around 60% of pre-pandemic levels. Next year’s ridership is projected to be 69%, and it’s forecasted to hit 80% by 2026. 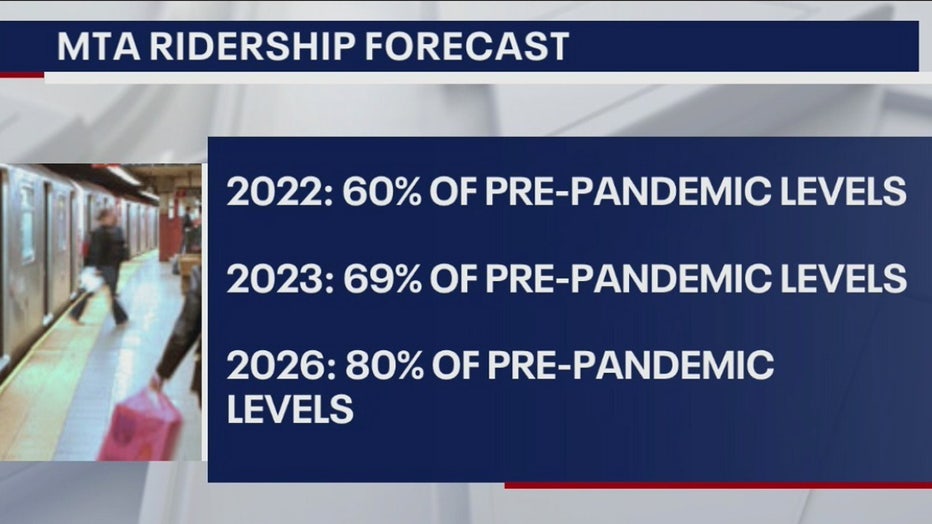 Lieber said the only way to avoid drastic changes is with help from the federal government, Gov. Kathy Hochul and Mayor Eric Adams.

"We could definitely avoid a fare hike if there is a plan. An answer coming from the decision-makers: Albany, Washington and City Hall, and maybe others."

Advocacy organizations seemed to echo the same sentiments. In a statement provided to Fox 5 New York, the Riders Alliance said, "In contrast to a fare hike, which would trigger a death spiral and devastate New York, more frequent service is the linchpin the governor needs to boost ridership, resilience, equity and safety all at once." The Tri-State Transportation Campaign also added, "This is not a problem that can be resolved overnight, but Gov. Hochul and state leaders have failed to enact any meaningful solutions."

Board members brought up several concerns about the budget plan. Robert Mujica said the MTA would be technically asking all taxpayers in the state to contribute – "You’re actually asking all New Yorkers, potentially, to pay for it, unless there’s some other mechanism."