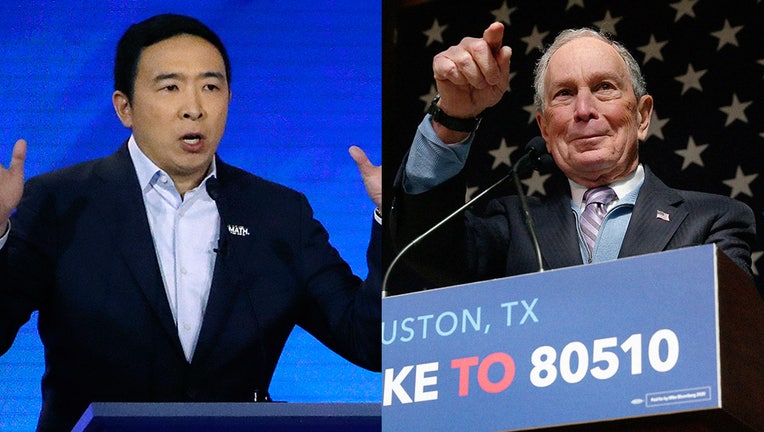 NEW YORK - How does Bloomberg-Yang 2020 sound? The campaign of Democratic presidential candidate and billionaire Mike Bloomberg has reached out to former candidate Andrew Yang to (1) get his endorsement and (2) possibly add him to the ticket, The Wall Street Journal reported, citing two sources.

Yang, 45, is an entrepreneur and the founder of the nonprofit Venture for America. He dropped out of the race for the Democratic nomination earlier this month and didn't commit to backing any other candidate. On Twitter, he said he would announce his next move in March.

Bloomberg, 78, is a Democrat-turned-Republican-turned-independent-turned-Democrat who made a fortune as the founder of financial information company Bloomberg LP. He served three terms as mayor of New York from 2002 to 2015.

The billionaire has spent hundreds of millions of dollars of his own money blanketing the Super Tuesday states with ads in the hopes of gaining traction against frontrunner Bernie Sanders, secure the nod, and then face President Donald Trump in November.

Yang didn't register much at either the Iowa caucuses or the New Hampshire polls but has an enthusiastic and vocal following, dubbed the "Yang Gang."

Some supporters and political insiders have indicated they want the Schenectady, New York-native and graduate of Columbia Law School to run for mayor of New York City next year, according to reports.