Thousands of protesters defied the city's curfew for another night and stayed in the streets. The NYPD made a few dozens arrests. Chief of Department Terence Monahan said his officers tried to give the protesters leeway.

NEW YORK (AP) - As protests continued in New York City on Wednesday, officials were hopeful that an earlier curfew and refined police tactics were bringing the city closer to restoring order after days of unrest over the death of George Floyd.

Demonstrators marched throughout the city in largely peaceful events, and like the previous night, were still on the streets when the 8 p.m. curfew time arrived.

Police began moving in on the crowds about an hour past curfew to start making arrests, at times using tactics like pepper spray that had brought outrage previously.

When one demonstrator asked an officer why he was being taken into custody, an Associated Press reporter heard the officer reply, "Curfew violater. You didn't hear the news?"

Rain also made for a barrier to remaining on the streets Wednesday night, with downpours arriving in the nighttime hours.

At Gracie Mansion, demonstrators were kneeling in a moment of silence when alarms rang on cellphones, warning that the curfew time was coming.

Citywide curfew in effect at 8PM. Essential workers are exempt. No traffic allowed in Manhattan south of 96th Street, with the exception of local residents, essential workers, buses, and truck deliveries. In addition, For Hire Vehicle services are suspended from 8 PM to 12:30 AM. For hire vehicle service may resume beginning at 12:30 AM June 4, to assist essential workers returning home or going to work in the overnight hours.

This means a lot to me, as a black woman. ... me myself, I've experienced a lot of racial profiling from police," said Stella Mbah, who was protesting at the the Gracie mayoral residence and was still marching after the curfew.

"There are so many things police are doing wrong to us black people," said the Nigerian-American, adding that she doesn't want to see the country torn apart by injustice. "I love this country so much, and I don't want to see it fall apart. Because if it falls apart, we all fall apart."

Police Commissioner Dermot Shea and other police brass met with religious leaders in Brooklyn to talk about the aftermath of the death of George Floyd and the state of police-community relations in the city and nation.

Lisa Horton, 29, said charges announced Wednesday against three other Minneapolis police officers in connection to Floyd's death were a step, but she was protesting because she feels much more needs to change.

"There's been progress, but are we at a point where we can all celebrate? No," the New Yorker said, calling for "radical change" in the criminal justice system.

Gov. Andrew Cuomo, who was critical of the police response on prior nights, said the city Tuesday "was much, much better than the night before."

"It worked. We got results," Cuomo said. "Let's just remember what we did last night and keep that going."

The governor has encouraged protesters to be tested for COVID-19 as the pandemic continues to impact the city and the state.

"Last night we took a step forward in moving out of this difficult period we've had the last few days and moving to a better time," Mayor Bill de Blasio said.

De Blasio rejected President Donald Trump's urging and Cuomo's offer to send in the National Guard to quell the unrest, saying the NYPD was best suited for the task and fearing out-of-town Guardsmen unfamiliar with city dynamics could spark confrontations.

Trump warned in a Fox News Radio interview that if city officials "don't get their act straightened out, I will solve it. I'll solve it fast," but didn't say what action he might take.

Hundreds of protesters were in Manhattan's Washington Square Park when the charges against the other officers were announced.

"It's not enough," protester Jonathan Roldan said, contending all four officers should've been charged from the start. "Right now, we're still marching because it's not enough that they got arrested. There needs to be systematic change."

Hundreds of protesters marched and rallied in Camden and Newark. In some cases, police and elected officials showed solidarity.

The curfew, barring people from streets citywide and nonessential vehicles from part of Manhattan from 8 p.m. to 5 a.m., was imposed to prevent the nighttime chaos that followed peaceful protests for several days in a row.

Around Manhattan, even in parts of the city that hadn't seen the damage and thefts, businesses had boarded up windows as precautions. That was the case at Saks Fifth Avenue, where a line of tattooed men with well-mannered dogs guarded the boarded windows wrapped in chain-link and razor wire.

Vandalism and pilfering didn't stop completely Tuesday. Some shops had windows smashed and merchandise taken. But it was a contrast from the previous two days, when several Manhattan shopping districts and one in the Bronx were overrun with people — some with crowbars and clubs — who ransacked numerous shops and set fires.

Moving the curfew from 11 p.m., where it had been Monday, as well as blocking vehicles from entering Manhattan, allowed police to take control of city streets and remove troublemakers, Chief of Department Terence Monahan said.

The nightly curfews will remain in effect at least through Sunday, with the city planning to lift it at the same time it enters the first phase of reopening after more than two months of shutdowns because of the coronavirus pandemic.

The marches were part of a wave of protests across the country since the May 25 death of Floyd, a black man who died after a white Minneapolis police officer pressed a knee on Floyd's neck for several minutes even after he stopped moving and pleading for air.

Police said they arrested about 280 people on Tuesday, compared with 700 the previous night. In all, more than 2,000 people have been arrested, the NYPD said. 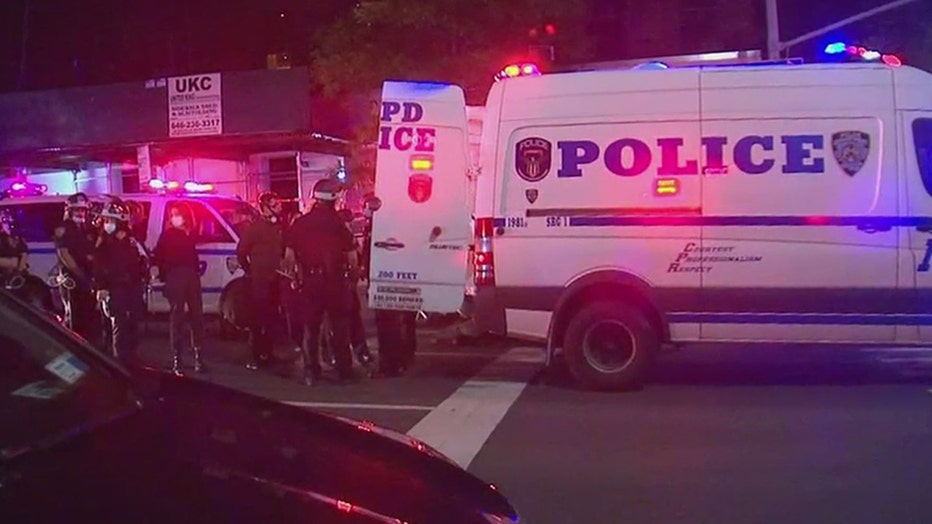 City officials have said, without offering much evidence, that out-of-town agitators have been responsible for the majority of attacks on officers and thefts from stores. They're not protesters, but organized groups that used vehicles to scout locations and remove stolen property, they said.

In a tweet Wednesday, Shea claimed "organized looters" had positioned bricks in plastic tubs around the city to use in their crimes. But City Councilman Mark Treyger noted the bricks in the video Shea tweeted were from a construction project far from where any protests or violence had occurred.

De Blasio condemned police for roughing up journalists covering the protests, including two from The Associated Press who were shoved, cursed at and told to go home by officers Tuesday night despite press being considered "essential workers" allowed to be on the streets.

"There should be no condition under which any journalist is detained by the police of this city or any city in the United States of America, period," de Blasio said, calling for an investigation.

Shea said officers were "doing the best we can under difficult circumstances," adding that some people stopped by police lied about being journalists.

"We're not perfect, we do the best we can in a situation," he said.

Jennifer Peltz and Jim Mustian in New York City and Marina Villeneuve in Albany contributed to this report.