Members of the NYPD engaged in an angry confrontation with journalists covering protests on Tuesday, June 2. At one point, officers shoved and cursed at an Associated Press TV crew, forcing them to abandon their coverage. (Video by The Associated Press)

NEW YORK - New York City police officers surrounded, shoved and yelled expletives at two Associated Press journalists covering protests Tuesday in the latest aggression against members of the media during a week of unrest around the country.

Portions of the incident were captured on video by videojournalist Robert Bumsted, who was working with photographer Maye-E Wong to document the protests in lower Manhattan over the killing of George Floyd in Minneapolis.

The video shows more than a half-dozen officers confronting the journalists as they filmed and took photographs of police ordering protesters to leave the area near Fulton and Broadway shortly after an 8 p.m. curfew took effect. 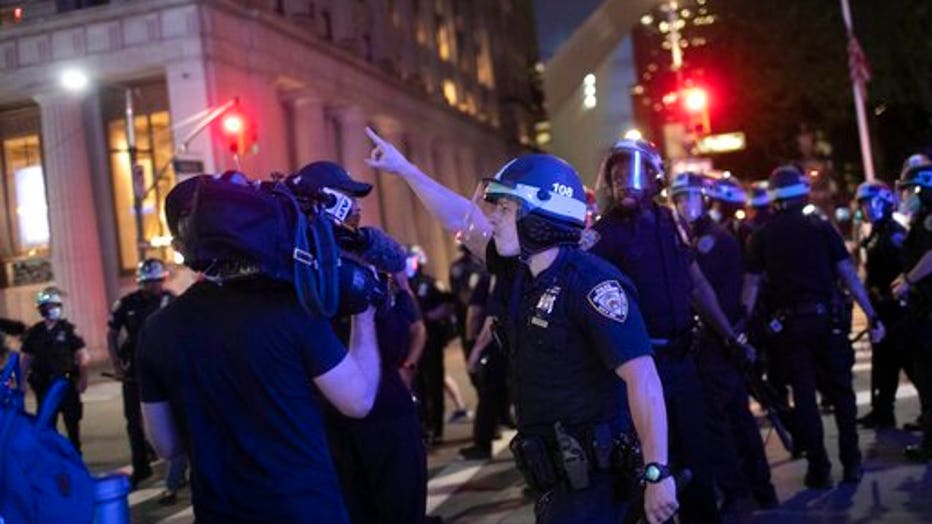 An officer, using an expletive, orders them to go home. Bumsted is heard on video explaining the press are considered “essential workers" and are allowed to be on the streets. An officer responds “I don't give a s—-.” Another tells Bumsted “get the f—- out of here you piece of s—-."

Bumsted and Wong said officers shoved them, separating them from each other and pushing them toward Bumsted's car, which was parked nearby. At one point Bumsted said he was pinned against his car. He is heard on video telling the officer that Wong has his keys and he needs them to leave the area. Officers then allowed Wong to approach and the two got in the vehicle and left.

Both journalists were wearing AP identification and identified themselves as media.

“They didn't care,” Wong said. “They were just shoving me.” 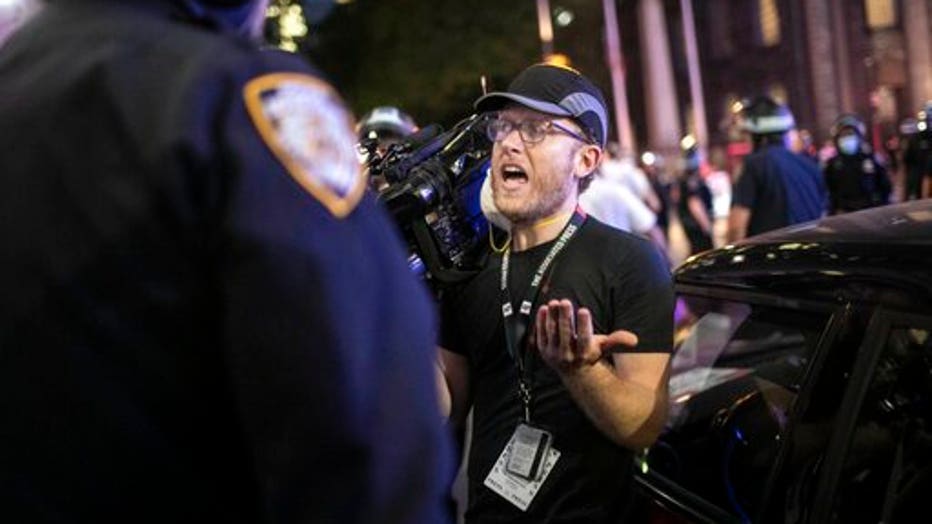 Associated Press videojournalist Robert Bumsted reminds a police officer that the press are considered “essential workers" and are allowed to be on the streets despite a curfew, Tuesday, June 2, 2020, in New York.(AP Photo/Wong Maye-E)

NYPD officials said they would “review this as soon as possible.”

Journalists have faced aggressive police and protesters during demonstrations across the U.S. over the killing of Floyd, a handcuffed black man who died after a white officer pressed his knee on Floyd's neck.

Police in Louisville, Kentucky, apologized after an officer fired what appeared to be pepper bullets at a TV news crew, and a journalist in Minneapolis was shot by a rubber bullet.

Journalists have faced other risks while covering the unrest, in addition to dealing with aggression from police. In South Carolina, a television news reporter was hit in the head by a thrown rock and outside the White House, a Fox News reporter was chased and pummeled by protesters. Someone grabbed the reporter’s microphone and threw it at his back, and a Fox News photographer’s camera was smashed.

In Atlanta, demonstrators who fought with police and set cars on fire also broke windows and scrawled obscene graffiti at CNN headquarters.

AP spokeswoman Lauren Easton criticized the officers' actions Tuesday, which occurred as thousands of people in New York were defying a curfew put in place following several nights of violence and destruction. Journalists covering the story are exempt from the curfew.

“The role of journalists is to report the news on behalf of the public," Easton said. "It is unacceptable and deeply troubling when journalists are harassed simply for doing their job.”