TOKYO (AP) - Filled with pink and fuzzy things and cuddly bears, 6%DOKIDOKI, a tiny store in the heart of Tokyo’s Harajuku district, is bursting with "kawaii," the Japanese for "cuteness."

What it doesn’t have enough of, as in zero, are foreign tourists. And it could sure use some.

Like much of Asia, including Taiwan, Vietnam and Australia, Japan’s borders remain closed to tourists. While other Asian countries are inching toward reopening, Japanese borders will likely remain shut for some time to come. That’s a hardship for the many businesses that had come to rely on foreign tourists, who numbered 32 million in 2019, before the pandemic.

"Foreigners understand ‘kawaii' more emotionally than do Japanese. They use, ‘Kawaii!,’ in the same way they say, ‘Wonderful,' 'Awesome,’ or ‘Lovely,’ " said manager Yui Yoshida, noting Japanese tend to use the word mainly for tangible things like cute puppies.

"We had so many foreign customers before the pandemic," she said. "Then suddenly no one could come."

6%DOKIDOKI opened 26 years ago and has a loyal following: when it was imperiled by the pandemic downturn, supporters in and outside Japan started up crowd-funding campaigns to keep it afloat. It is also boosting mail-order sales and has introduced colorful face masks in a psychedelic flurry of hues and bear-shaped pouches useful for carrying hand sanitizers. 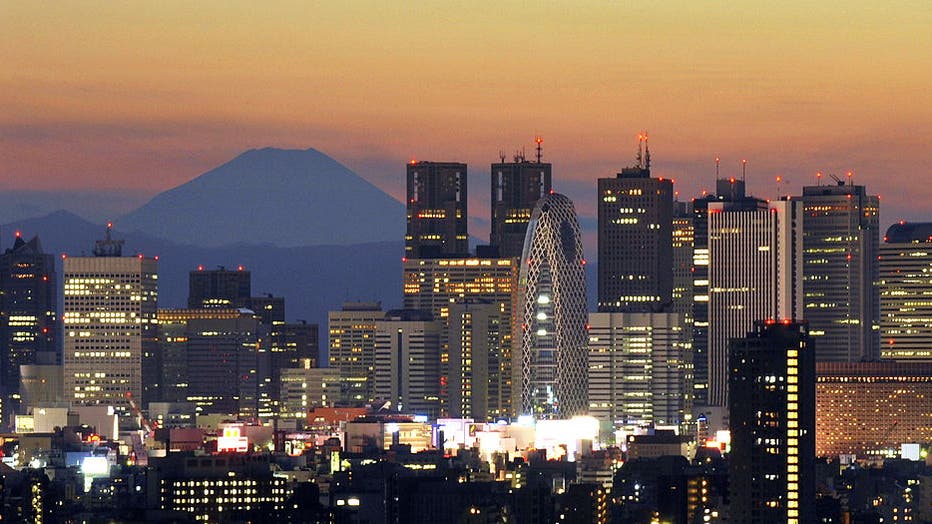 Japan's highest mountain Mount Fuji rises up behind the skyscraper skyline of the Shinjuku area of Tokyo at sunset on Jan. 10, 2010. (Photo credit: KAZUHIRO NOGI/AFP via Getty Images)

While mandatory quarantine requirements have been eased somewhat after the number of new coronavirus cases plunged from hundreds per day to a few dozen per day in Tokyo, unlike the Indonesian resort island of Bali and some destinations in Thailand, Japan remains off-limits to foreign tourists.

Japan has also effectively shut out foreign students and business travelers. A big exception, much criticized, was made for athletes and officials arriving for the Tokyo Olympics earlier this year.

Toriumi, who teaches at Tokyo's Teikyo University, thinks foreign tourism won’t revive for another year or two, even though about 73% of Japanese are fully vaccinated. That’s a much higher rate than most other Asian countries, except for Singapore.

Even if the borders reopen, tourism won't revive if Japan continues to require 10-day quarantines by travelers arriving from overseas, he said.

"Even one day of quarantine is going to squelch tourism," Toriumi said, having just returned from a business trip to France, still the No. 1 destination for global tourists.

Much depends on whether COVID-19 cases will be contained. Medical experts worry infections might shoot up again in another seasonal wave.

For now, the government is preparing to restart its "GoTo" promotions for domestic travel, which provide discounts for travel, lodging and other spending. Last year the program was canceled after five months when the virus surged back.

The campaign is estimated to have generated nearly 1.8 trillion yen ($16 billion) in revenue from 52.6 million travelers within Japan, according to the Japan Travel Bureau Foundation.

But domestic travel still cannot fully offset the loss of business from tens of millions of foreign tourists.

Tourism from abroad to Japan started zooming in 2014, strongly encouraged by then-Prime Minister Shinzo Abe. In 2019, the travel and tourism sector contributed 7.1% to Japan's economy, according to the World Travel & Tourism Council.

The target for 2020 was 40 million people. But instead, after the New Year holidays visitors dwindled as pandemic travel restrictions were imposed. Travel and tourism revenues fell to 4.7% of economic activity. Meanwhile, the number of people employed in tourism and travel, including people working at hotels, airlines, travel agencies and restaurants catering to tourists, fell to 5.4 million from 5.7 million,, the council said.

Before the pandemic, foreign tourists were spending more than 4 trillion yen ($35 billion) per year. Asian visitors intent on hoarding designer products led to the coining of the phrase "baku-gai," meaning "explosive shopping."

In those days, popular destinations like the ancient capital of Kyoto were jampacked with tourists. Now the crowds are mostly children on school excursions. Kiyomizu-Dera temple, famous for its spectacular hillside overlooking the city, has lost about a third of the 5 million annual visitors it had before the pandemic, even with the recent recovery in domestic travel.

Itsuo Nishida, a manager at the temple, didn’t want to venture a guess as to when things might return to normal.

"This is one place everyone wants to visit at least once in their lives," he said.

At 6%DOKIDOKI, so named for the bit of "flutter" to the heart imparted by cute things, pink-haired store clerk Emiry, spelled with that Japanese-y "R," and no last name, says she has only worked in the shop during the quiet days of the pandemic.

Some shops in Harajuku are shuttered, especially in the winding back lanes.

"Only two foreign customers came," the pink-haired Emiry said sadly of a recent day at the store.

And they lived in Japan. They were not tourists.