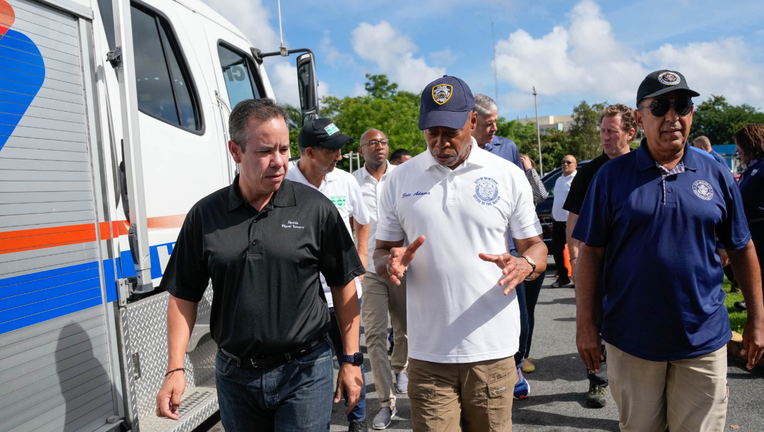 "We call Puerto Rico our sixth borough and we don’t take that name lightly," Adams said in a tweet. "We’re going to do the work on the ground to make our neighbors whole again."

Click here to find out how you can help the people of Puerto Rico.

Fiona hit southwestern Puerto Rico with 85 mph (140 kph) winds on Sept. 18 and the broad storm unleashed flooding across the island, which still had not recovered from 2017's Hurricane Maria, a stronger cyclone that slashed across the U.S. territory, obliterating the power grid, which had since been patched but not fully rebuilt.

Puerto Rico’s government has said it expects to have a preliminary estimate of the damage Fiona caused in roughly two weeks.

As of Sunday, about half of Puerto Rico’s 1.47 million power customers remained in the dark, and 20% of 1.3 million water customers had no service as workers struggled to reach submerged power substations and fix downed lines.

New York City Council Member Marjorie Velazquez, D-Bronx, spoke to Good Day New York from the Dominican Republic to talk about the damage there and in Puerto Rico caused by Hurricane Fiona.

Power company officials announced Sunday that 1.1 million to 1.3 million clients could have power by Friday, Sept. 30 but warned those estimates could change. They did not say when the entire island would be energized.

"(Fiona) affected our whole infrastructure. We are doing everything we can to fix it," said Lawrence Kazmierski, senior vice president for Luma, the company that took over the island's power transmission and distribution more than a year ago.

Hurricane Fiona may have passed Puerto Rico, but the rebuilding process goes on in its aftermath. One local group is stepping in to help aid the storm's victims.

Gas stations, grocery stores and other businesses have temporarily shut down due to lack of fuel for generators. The National Guard first dispatched fuel to hospitals and other critical infrastructure.