As Henri bears down on New England, boaters in Connecticut scrambled to prepare.

BOSTON (AP) - New Englanders bracing for their first direct hit by a hurricane in 30 years began hauling boats out of the water and taking other precautions Friday as Tropical Storm Henri barreled toward the southern New England coast.

Henri was expected to intensify into a hurricane by Saturday, the U.S. National Hurricane Center said. Impacts could be felt in New England states by Sunday, including on Cape Cod, which is teeming with tens of thousands of summer tourists.

Massachusetts Gov. Charlie Baker on Friday urged people vacationing on the Cape to leave well before Henri hits, and those who planned to start vacations there to delay their plans. "We don't want people to be stuck in traffic on the Cape Cod bridges when the storm is in full force on Sunday," he said.

"This storm is extremely worrisome," said Michael Finkelstein, police chief and emergency management director in East Lyme, Connecticut. "We haven't been down this road in quite a while and there's no doubt that we and the rest of New England would have some real difficulties with a direct hit from a hurricane."

Finkelstein said he's most concerned about low-lying areas of town that could become impossible to access because of flooding and a storm surge.

Thursday marked exactly 30 years since Hurricane Bob came ashore in Rhode Island as a Category 2 storm, killing at least 17 people and leaving behind more than $1.5 billion worth of damage. Bob, which left streets in coastal towns littered with boats blown free of their moorings, left hundreds of thousands without power and water for days.

Large swaths of the Eastern seaboard were mopping up on Friday from the effects of Henri's predecessor, Tropical Depression Fred. In North Carolina, Haywood County Sheriff Greg Christopher said seven individuals remained unaccounted for, down from around 20 people reported missing on Thursday.

Christopher also confirmed the identities of the two people who died during Fred, which include a 68-year-old and an 86-year-old resident living in the Cruso area. "Our thoughts and prayers are extended to both these families, and we will support both these families in this tragic loss," he said.

The National Weather Service warned of the potential for damaging winds and widespread coastal flooding from Henri. Authorities urged people to secure their boats, fuel up their vehicles and stock up on canned goods. 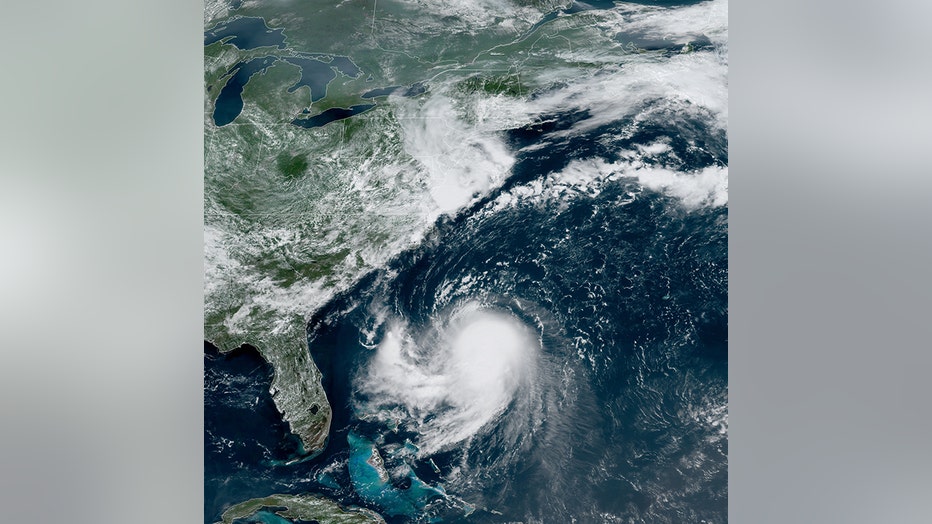 The system was centered in the Atlantic Ocean about 345 miles (560 kilometers) south-southeast of Cape Hatteras, North Carolina, and about 745 miles (1,200 kilometers) south of Montauk Point, New York. It had maximum sustained winds of 65 mph (100 kph).

The hurricane watch stretched across the South Shore of Long Island from Fire Island Inlet to Montauk, and the North Shore from Port Jefferson Harbor to Montauk. It also covered the coast from New Haven, Connecticut, to Sagamore Beach, Massachusetts; and Nantucket, Martha's Vineyard and Block Island.

The main threats were expected to be storm surge, wind and rain, forecasters said. Storm surge between 3 and 5 feet (1 to 1.5 meters) was possible from Watch Hill, Rhode Island, to Sagamore Beach.

Rainfall between 2 to 5 inches (5 to 12 centimeters) was expected Sunday through Monday over the region.

Henri was heading northwest Friday morning, but forecasters expect it to make a turn toward the north and approach the New England coast.

At the U.S. Navy's submarine base in Groton, Connecticut, personnel on Friday were securing submarine moorings, installing flood gates in front of doors on some waterfront buildings, and doubling up lines on small boats, officials said. Families were being encouraged to watch the forecast and make any necessary preparations.

The Coast Guard urged boaters to stay off the water, saying in a statement: "The Coast Guard's search and rescue capabilities degrade as storm conditions strengthen. This means help could be delayed."

At the Port Niantic marina in Niantic, Connecticut, Debbie Shelburn and her employees were already busy Friday hauling boats out of the water and into a large storage building.

"Basically, it's become all hands on deck. No matter your position — mechanic, whatever — everybody is out there helping with the logistics of moving the boats and getting them secure on land," she said.