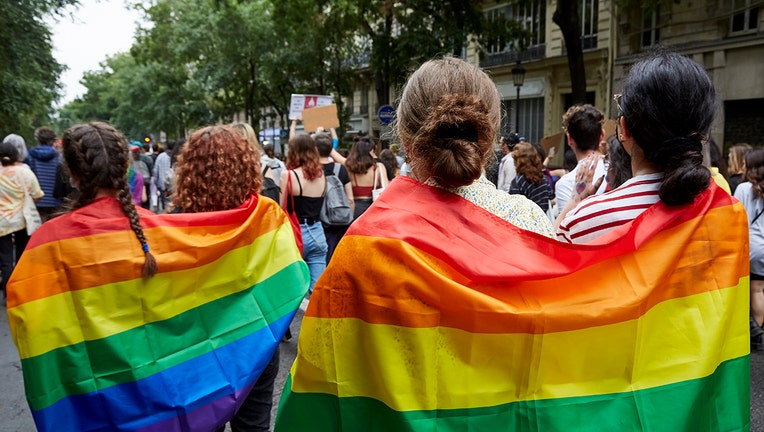 Participants take part at the annual Pride parade in Paris on June 26, 2021. (Photo by Adnan Farzat/NurPhoto via Getty Images)

The wide-ranging bioethics law, presented by French President Emmanuel Macron's government, was approved by the National Assembly in a 326-115 vote.

The measure had been much awaited by LGBT rights groups, who had pushed for the reproduction measure since France legalized same-sex marriage in 2013.

The new law will expand access to fertility treatments such as artificial insemination and in vitro fertilization (IVF), currently reserved only for infertile heterosexual couples.

In France, fertility treatments are free — and this would now also include lesbian couples and single women.

Armêl Balogog, a journalist who describes herself as bisexual and in a relationship with another woman, welcomed the new law.

"Let me tell you how much it means for me to live in a country where I can legally have a child with the woman I love," Balogog tweeted after the vote. She said only regrets that transgender people were "forgotten" by the law.

The law did not meet demands that transgender women be allowed to donate sperm for use in fertility procedures before their gender reassignment.

Health Minister Olivier Veran said French authorities are getting ready to apply the new law as quickly as possible so that the first children could be conceived by the end of the year.

The vote marks the end of a protracted, two-year debate in parliament. The conservative majority in the Senate repeatedly rejected the measure, but the lower house of parliament, where Macron's centrist party has a majority, has the final say.

"We are satisfied that this is getting done ... but this has been a painful birth," he said, expressing frustration that it took so long to get to the final vote of the law.

Gatipon said it has been hard on French women who had to delay for years their plans to have a baby, and others who had to pay expensive fees to go abroad to countries where such procedures are available, such as Spain and Belgium.

The new law does not address France's ban on surrogacy arrangements in which a woman carries and delivers a baby for someone else.