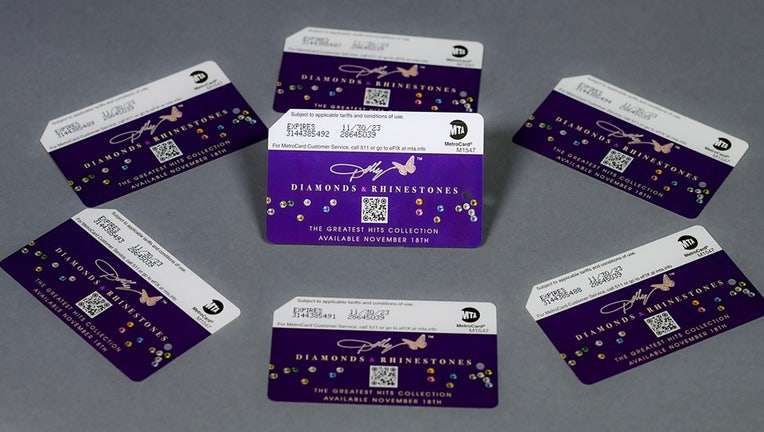 Dolly Parton MetroCards are coming to the NYC subway (MTA)

MetroCards will be available for purchase as early as today on a first come, first served basis. Here are the stations:

The release comes in partnership with Legacy Recordings, the catalog division of Sony Music Entertainment and Dolly Records.

Parton, 76, recently announced she's done with touring. In an interview with Pollstar, Parton boldly claimed, "I do not think I will ever tour again," before adding, "I’ll do special shows here and there, now and then. Maybe do a long weekend of shows, or just a few shows at a festival. But I have no intention of going on a full-blown tour anymore."

The country legend is still churning out new music but wants to enjoy a simpler life with her husband, Carl Thomas Dean. Speaking of touring, Parton says, "I’ve done that my whole life, and it takes so much time and energy. I like to stay a little closer to home with my husband. We’re getting older now, and I don’t want to be gone for four or five weeks at a time. Something could happen. I would not feel right about that, if I were gone and somebody needed me. Or I would feel bad if I had to leave a tour if somebody got sick at home and needed me and then I had to walk out on the fans."

Parton, who has been married to Dean since 1966, says her husband is who she is currently making new music for — in the form of a rock and roll album. "When I got nominated for the Rock & Roll Hall of Fame, I thought, well, no better time to do it.' I had always wanted to do it. My husband is a big hard rock ’n’ roll fan, and for years I thought, 'One of these days I’d like to do an album mainly just for him, just to kind of do it.'"

Parton was honored and inducted into the Hall of Fame in May. She took the stage Saturday night in Los Angeles.