GLASGOW, Scotland - In the fight to curb climate change, several major coal-using nations announced steps Thursday to wean themselves — at times slowly — off of the heavily polluting fossil fuel.

The pledges to phase out coal come on top of other promises made at the U.N. climate summit in Glasgow, Scotland, that the head of an international energy organization said trimmed several tenths of a degree from projections of future warming. But outside experts called that "optimistic."

Optimism also abounded in relation to the promises on coal, which has the dirtiest carbon footprint of the major fuels and is a significant source of planet-warming emissions. 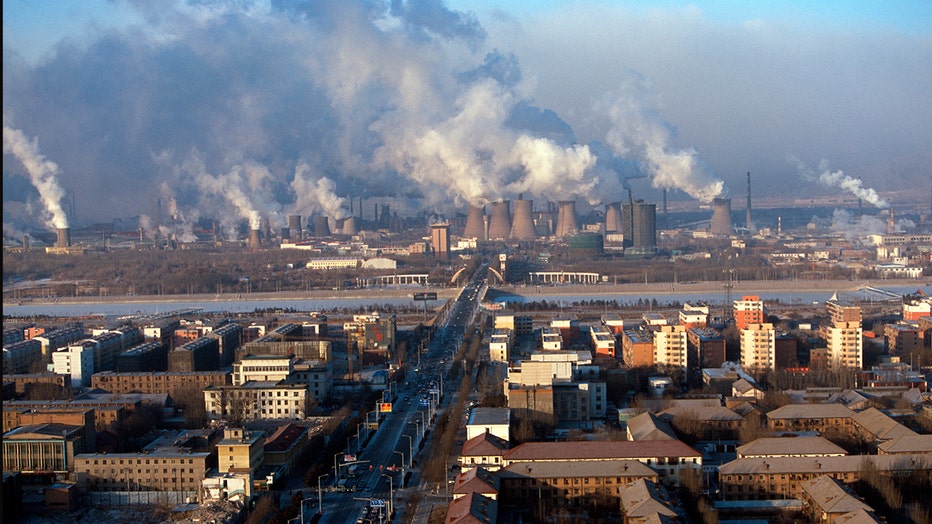 The Bao Steel mill in the morning, in Baotou, Inner Mongolia, China. (Photo by Ryan Pyle/Corbis via Getty Images)

"Today, I think we can say that the end of coal is in sight," said Alok Sharma, who is chairing the conference of nearly 200 nations, known as COP26.

Critics say that vision is still obscured by a lot of smoke because several major economies still have yet to set a date for ending their dependence on the fuel, including the United States, China, India and Japan — which was targeted outside the summit venue Thursday by protesters clad as animated characters.

What nations have promised varies. Some have pledged to quit coal completely at a future date, while others say they'll stop building new plants, and even more, including China, are talking about just stopping the financing of new coal plants abroad.

The British government said pledges of new or earlier deadlines for ending coal use came from more than 20 countries including Ukraine, Vietnam, South Korea, Indonesia and Chile.

Some came with notable caveats, such as Indonesia's request for additional aid before committing to bring its deadline forward to the 2040s.

Meanwhile, Poland, the second-biggest user of coal in Europe after Germany, appeared to backtrack on any ambitious new commitments within hours of the announcement.

"Energy security and the assurances of jobs is a priority for us," Anna Moskwa, Poland's minister for climate and environment, said in a tweet, citing the government's existing plan which "provides for a departure from hard coal by 2049." Earlier in the day, it had seemed that Poland might bring that deadline forward by at least a decade.

"Moskwa has underscored that her government cannot be trusted to sign a postcard, let alone a responsible climate pledge," said Kathrin Gutmann, campaign director of the group Europe Beyond Coal.

Separately, more than two dozen countries, cities and companies joined the Powering Past Coal Alliance, whose members commit to ending coal use by 2030, for developed countries, and no later than 2050 for developing ones. Banks that are members pledge not to provide loans for the worst types of coal-fired power plants.

While not completely ruling out financial support for coal-fired power plants, the countries said they would refrain from any "new direct public support" for coal except in limited circumstances.

That move was seen as a significant step by environmental campaigners, who said that it could push international lenders to stop providing loans for new fossil fuel projects.

A U.S. official, speaking on condition of anonymity to discuss officials’ thinking, said that while the U.S. hadn’t opted to join the coal phase-out pledges, its commitment to a clean energy future was clear. The Biden administration wants to reach 100% carbon pollution-free electricity by 2035.

Underlining the urgent need for action on coal, a new analysis by scientists at Global Carbon Project found emissions from the fuel increased dramatically in 2021, not just from pandemic-struck 2020 levels, but even when compared to pre-pandemic 2019 levels. The world spewed 14.7 billion metric tons (16.2 billion tons) of carbon dioxide from coal burning, 5.7% more than last year, said the group, which tracks annual carbon pollution.

That was mostly spurred by a dramatic increase in China, which hit a new peak of coal emissions this year of 7.6 billion metric tons (8.4 billion tons) of carbon dioxide, more than half the globe's coal emissions, the report said.

Still, experts said the announcement and others made so far at the summit showed the growing momentum to ditch coal.

"Today’s commitments will help to shift whole continents on their journey to phase out coal," said Dave Jones of the energy think tank Ember.

Ukraine, the third-biggest coal consumer in Europe, is bringing forward its coal deadline, from 2050 to 2035.

Coal production in Ukraine has already dropped significantly over the past few years: From 40.9 million metric tons in 2016 to 28.8 million in 2020 (45 million tons to 32 million), according to the Energy Ministry.

The figures do not include production in the coal fields of separatist-controlled eastern Ukraine, which accounted for about half of Ukraine’s mines prior to the 2014 uprising.

"The progress on coal being shown at COP26 demonstrates that the conditions are ripe for a global coal exit," said Leo Roberts, a senior researcher at the environmental think tank E3G.

"We now need to see the incoming massive scale-up in clean energy finance made available quickly to ensure all countries can confidently move from coal to clean," he added.

"Emissions from oil and gas already far outstrip coal and are booming, while coal is already entering a terminal decline," said Murray Worthy of the campaign group Global Witness. "This is a small step forwards when what was needed was a giant leap."

The agreements on coal are not part of the formal negotiations at the U.N. talks in Glasgow. But British Prime Minister Boris Johnson, whose country is hosting the conference, had said he wanted to see deals on coal, cars, trees and cash.

Fatih Birol, head of the International Energy Agency, said Thursday that a new analysis by the Paris-based body shows that fully achieving all the emissions-reduction pledges made on previous days — including for the potent greenhouse gas methane — could allow the world to limit warning to 1.8 degrees Celsius (3.2 degrees Fahrenheit) above pre-industrial levels.

The goal that countries set at a previous conference in Paris is to limit temperature increases to 1.5C (2.7F). A United Nations analysis showed that before Glasgow the world was heading to a 2.7C (4.9F) increase while other analyses showed warming in the mid- to upper-2-degree range also.

Niklas Hohne, of the New Climate Institute and Climate Action Tracker, called Birol's figure "optimistic" and noted it was based on countries achieving pledges to only emit what can be absorbed — so called net-zero plans — when they haven't yet implemented any actions that would get them there.