LOS ANGELES - Climate change has continued its relentless march through 2020 with record-breaking temperatures, sea-loss, hurricanes and wildfires. Now, 2020 is on track to be one of the three warmest years and the past decade could be the hottest on record, the World Meteorological Organization (WMO) said in a press release Wednesday. 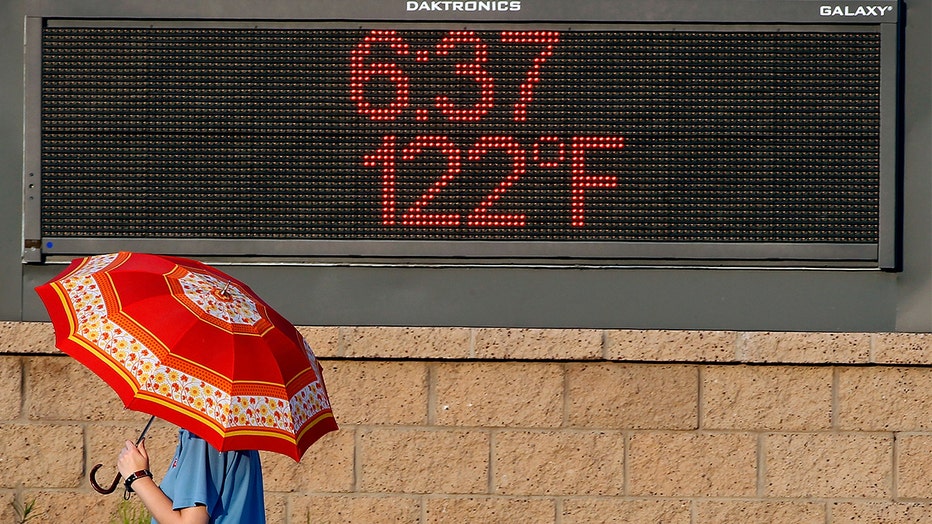 A pedestrian uses an umbrella to get some relief from the sun as she walks past a sign displaying the temperature on June 20, 2017 in Phoenix, Arizona.

“We are now experiencing a La Niña, which has a cooling effect on global temperatures, but has not been sufficient to put a brake on this year’s heat. Despite the current La Niña conditions, this year has already shown near record heat comparable to the previous record of 2016,” said Taalas.

According to the provisional report, which is based on temperature data from January to October, 2011-2020 will be the warmest decade on record, with the warmest six years all occurring since 2015.

What is causing the warming?

One contributing factor to the world’s unusually hot temperatures is warmer-than-average ocean temperatures.

“Ocean heat is at record levels and more than 80% of the global ocean experienced a marine heatwave at some time in 2020, with widespread repercussions for marine ecosystems already suffering from more acidic waters due to carbon dioxide (CO2) absorption,” according to the provisional WMO report on the State of the Global Climate in 2020.

Despite the COVID-19 pandemic lockdowns, the WMO said that atmospheric concentrations of greenhouse gases continued to rise, and the record weather events in 2020 “affected millions of people, compounding threats to human health and security and economic stability posed by the COVID-19 pandemic.”

Last month, the United States formally left the Paris Agreement, a global pact put together five years ago to avert the threat of catastrophic climate change.

The move, triggered by President Donald Trump and his administration a year ago, further isolates the United States from the world’s efforts to combat the climate crisis. Biden has said previously that he plans to rejoin the Paris Agreement once in office.

Some 189 countries remain committed to the 2015 Paris accord, which aims to keep the increase in average temperatures worldwide “well below” 2 degrees Celsius (3.6 degrees Fahrenheit).

“According to International Monetary Fund, the current global recession caused by the COVID-19 pandemic makes it challenging to enact the policies needed for mitigation, but it also presents opportunities to set the economy on a greener path in order to boost investment in green and resilient public infrastructure, thus supporting GDP and employment during the recovery phase,” the WMO wrote.

Temperatures heat up in 2020

According to scientists at NOAA’s National Center for Environmental Information, the three-month season from June through August 2020 was the Northern Hemisphere’s hottest meteorological summer, surpassing 2019 and 2016, which were previously tied for the hottest.

The globe as a whole also had its third-hottest summer.

RELATED: The Northern Hemisphere officially had its hottest summer on record, NOAA says

“The most notable warmth was observed across northern Asia, particularly the Siberian Arctic, where temperatures were more than 5 °C above average. Siberian heat culminated in late June, when it reached 38.0 °C at Verkhoyansk on the 20th, provisionally the highest known temperature anywhere north of the Arctic Circle. This fuelled the most active wildfire season in an 18-year long data record, as estimated in terms of CO2 emissions released from fires," the WMO wrote.

RELATED: Hot summer ahead: Scientists say 2020 is on pace to be one of the warmest years on record

In August, Death Valley, California recorded a whopping 130 degrees, the hottest Earth has been in more than 89 years and the third-warmest temperature ever measured. That 130 temperature reading is only below the disputed all-time record of 134 degrees at nearly the same spot in 1913.

A record number of hurricanes brewed in the Atlantic

The United States saw a record number of hurricanes in the Atlantic, including unprecedented back-to-back Category 4 hurricanes in Central America in November.

The extremely active 2020 Atlantic hurricane season officially ended on Nov. 30 with a record-breaking 30 named tropical storms, including 13 hurricanes and six major hurricanes. There were 12 storms that made landfall in the continental United States, according to the WMO.

RELATED: Tropical Storm Eta forms in Atlantic, ties record for most named storms in a season

“This is the most storms on record, surpassing the 28 from 2005, and the second-highest number of hurricanes on record,” the WMO wrote in another press release on Tuesday.

“Hurricane research has previously focused on the United States, so we wanted to look at the Caribbean region, which has fewer resources to recover. The findings are alarming and illustrate the urgent need to tackle global warming to reduce the likelihood of extreme rainfall events and their catastrophic consequences, particularly for poorer countries which take many years to recover,” said lead author Emily Vosper, a research student at the School of Computer Science at the University of Bristol.

The average Arctic sea ice extent (coverage) in August was the third smallest on record, 29.4% below the 1981–2010 average, according to analysis by the National Snow and Ice Data Center.

“Arctic sea-ice reached its annual minimum in September, as the second lowest in the 42-year-old satellite record. Arctic sea ice for July and October 2020 was the lowest on record," the WMO wrote.

Arctic sea ice melt usually begins to solidify again in October, but for the first time since record keeping began, the Laptev Sea in Siberia hadn’t frozen by October, according to a report published that month by NOAA.

"Because of the unusually low ice growth in October, the current ice extent is now the lowest for any October in the past 41 years,” Severe Weather Europe wrote.

Meanwhile, in September, an enormous chunk of Greenland’s ice cap broke off in the far-northeastern Arctic.

In August, a study showed that Greenland lost a record amount of ice during an extra-warm 2019, with the melt massive enough to cover California in more than 1.25 meters (4 feet) of water.